The boys are back in town

A NEW-LOOK Oldham side, which has done well in its two pre-season games to date, will be back in town on Sunday for the first time in nearly two and a half years.

After playing at Stalybridge in 2016 and 2017, Scott Naylor’s much-changed squad returns ‘home’ this weekend to play its third and final warm-up match against Betfred League 1 rivals Keighley Cougars at the revamped and much-improved Vestacare Stadium, Limehurst Village, kick-off 3pm. 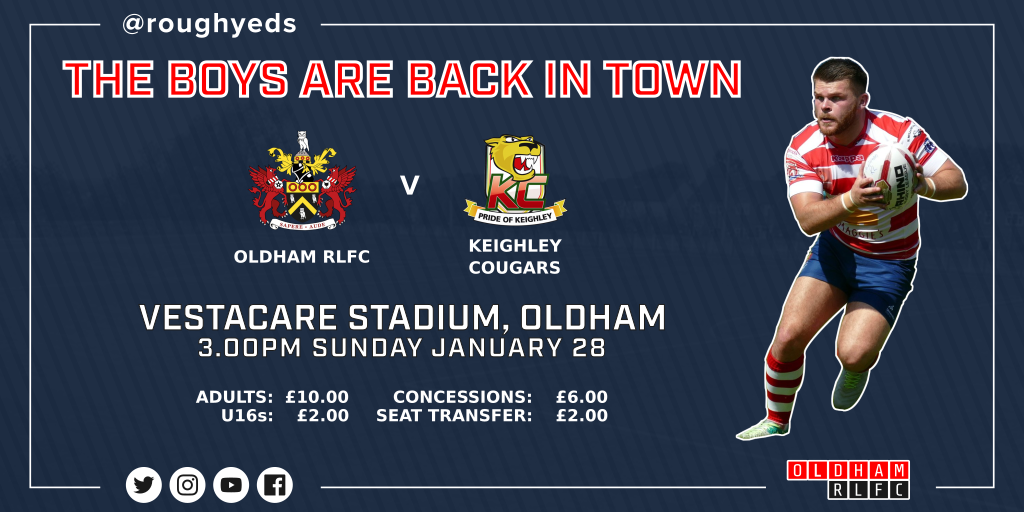 The biggest change will see Roughyeds playing on the ground’s new state-of-the-art artificial pitch for the first time, although they have been training on it regularly during pre-season.

“It will be a fast game on that surface; just the opposite to what we had in those atrocious conditions at Barrow last Sunday,” said Naylor.

In their two previous friendlies against Championship sides Rochdale and Barrow, Naylor’s men won 28-24 at the Crown Oil Arena to regain the Law Cup and then lost 16-6 at Barrow with a reshaped side that included five trialists.

Of the 19-man squad at Barrow, only seven players were at the club last season and two of those, Craig Briscoe and Phil Joy played very little rugby because of injury. Both came through their big test — a major plus for Naylor and the club.

A highlight of the impressive win at Rochdale was the two-try performance of big centre Matt Reid, who also crossed the line at Craven Park only to be ruled offside when chasing and picking up Dave Hewitt’s grubber at top speed on a sloppy surface.

In both games, Naylor was chuffed by his side’s resolve, desire and determination and he will be looking for similar hard work and enthusiasm against a Keighley side that has lost both its friendlies to date; 46-20 at Barrow and 28-0 at home to Batley.

His one reservation about the Barrow display was the struggle to make the most of sustained pressure and convert it into points, so he will also be looking for a sharper cutting edge in his attack on the firm and true surface.

Bent (dislocated elbow), hookers Gareth Owen (foot) and Kenny Hughes, who had surgery on a damaged finger on Monday, are definitely out, but Naylor says all three are on schedule to be back before the end of February.

Sunday’s game will be Oldham’s first at the Vestacare (formerly Whitebank) Stadium since their terrific 31-20 win against the Cougars in the Promotion Final at the end of the 2015 season.

Both teams are much-changed because of comings and goings over the last two seasons and in Oldham’s case only six players are still at the club — Hughes, Owen, Adam Neal, Danny Langtree, Phil Joy and Jack Holmes, who left for Rochdale and then came back after a season and a bit at the Crown Oil Arena.

Naylor will choose from his 18 fit contracted players, plus five trialists,

Admission prices are £10 adults, £6 concessions, £2 under-16s with a £2 across-the-board transfer for a seat in the stand.