Wood to step down as Chief Executive of the RFL

The Rugby Football League’s Chief Executive Nigel Wood has confirmed that he is to stand down after serving 10 years in the post. 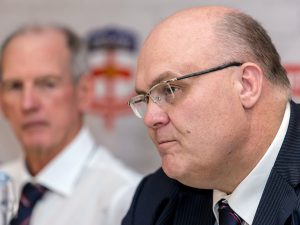 Wood, who is one of the longest serving administrators in the sport, was one of the two original creators of Super League Ltd and instrumental in devising the Grand Final concept in 1998. He was also behind the introduction of the Magic Weekend, first brought into the sport in 2008 and secured the biggest commercial deal in the sports history with long term broadcast partner Sky Sports in 2014.

Nigel Wood, said: “I am extremely honoured and privileged to have served as Chief Executive of the Rugby Football League. I am an unashamed Rugby League fan and can think of no greater honour that be asked to fulfil the role of CEO for the Rugby Football League. However leadership presents many tests, and the greatest of these is to recognise when it is time to step out and this is the right moment to do so. I would like to place on record my unreserved thanks to the many excellent colleagues, the clubs and all those that I have worked with throughout the last sixteen years and wish them the best of luck for the future.”

Confirming the departure, Chairman of the Rugby Football League, Brian Barwick, said: “Nigel has been a superb administrator, innovator and advocate for the sport of Rugby League in this country. His range of achievements in the sport speak for themselves and he has brought a genuine love of the game to his work over many years. His time at the helm of the Rugby Football League will always be looked upon warmly and with great respect.”

Wood also played a key role in expanding the horizons of English Rugby League, introducing the Catalans Dragons and the Toronto Wolfpack to the league structure, while his appointment of Wayne Bennett as Head Coach of England saw the national side reach the final of the World Cup for the first time in 22 years.

Chief Operating Officer Ralph Rimmer will act as interim Chief Executive while the Rugby Football League Board begin the search for a new Chief Executive.

Amendments to laws and playing conditions for 2019

The Rugby Football League is set to launch a new community league for 2019, classed as a Tier 4 competition, for the best community clubs from the south of England and Wales.

Red Star Belgrade will launch their first Challenge Cup adventure in Cumbria next January, after being drawn away to Millom

Tony Adams MBE has been nominated to become the 29th President of the Rugby Football League in 2019.
Our Partners