AFTER several seasons playing in traditional red and white hoops, Oldham players will proudly turn out in a more modern design in the 2018 Betfred League 1 season which starts for Scott Naylor’s men at Whitehaven on Sunday, February 18.

Betfred have installed Roughyeds as second favourites to win the league title at 6-1, behind Bradford Bulls (4-9) whom they rate as odds-on to win promotion automatically. 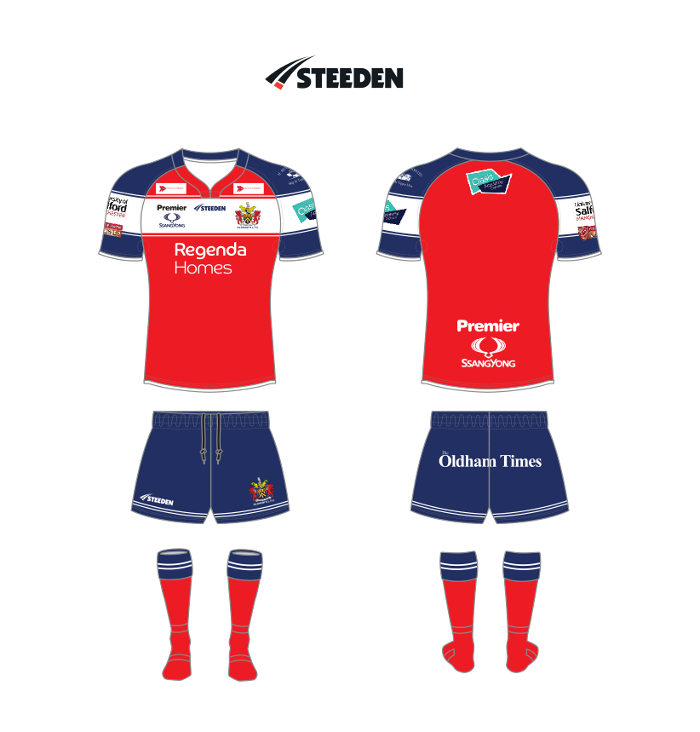 With ten new signings, different kit suppliers, new dual-registration partners in Salford Red Devils and a return to the newly refurbished and renamed Vestacare Stadium, there’s a fresh look about the club this year — and that also stretches to this newly-designed home kit, supplied by Steeden.

“This doesn’t mean we won’t look again at hoops in the future, but we’ve settled on a new design which we think fans will like and want to wear.

“Steeden came up with this modern design which they, and we, think will prove very popular.”

Replica shirts are available to order now on the Oldham payments site.

An initial deposit of £10.00 per item will be required with the balance to be paid in full when the shirts arrive at the club. (An estimated 4-5 weeks at the latest).

Fans will be able to collect their purchase from the club during opening hours and on match days or pay to have it posted. The postage is taken at the same time at the initial deposit.

Priced at £38.00 for child sizes and £45.00 for adults, the shirts are supplied in a wide range of sizes detailed on the product page.

A strikingly-different away kit will be unveiled tomorrow (Sunday) and a range of leisure-wear on Monday. | Chairman Chris Hamilton, head coach Scott Naylor, the players and everyone else at the club wish all supporters, sponsors. volunteer helpers and backers a very Happy Christmas and a healthy and peaceful 2019.
Our Partners