Anne Kearns . . . in the hot-seat while Chris is on sick leave

ANNE Kearns is working from the boss’s chair while our club chairman Chris Hamilton is resting and recuperating after major heart surgery.

In her first programme notes, for the London Skolars game, this is what she had to say: 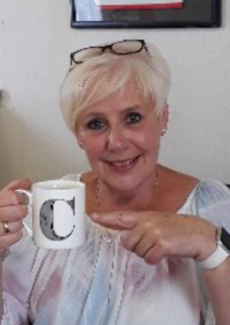 I FEEL massively privileged to be asked to write these programme notes on behalf of the club in the absence of our chairman Chris Hamilton.

Most of you will know that Chris has had major heart surgery. He is resting and recuperating but it’s going to be several weeks before he’s back.

He sends best wishes to everyone and congratulations to Scott, Peter and the boys for all they’ve achieved in the past few weeks . . . like seven league wins in a row, which takes some doing.

While he’s getting better after a seriously BIG operation, I’ve been asked to hold the fort — and to say that came as a shock was a huge understatement. I was blown away, but at the same time honoured to take on the task.

I have to say I am getting lots of help from lots of people. Without that help I would struggle so a big thank-you to all concerned.

Some of you will have seen me around the place in the last two or three years.

Basically, I’m a fan. I had never watched a game of rugby league before I was invited to my first Sunday afternoon at what was then called Whitebank.

It took one match and I was well and truly hooked !

Since that first game I’ve got more and more involved, helping out with a variety of duties before taking on the responsibility of running trips and helping to organise the 20th Anniversary ‘party’ we had at the Queen Elizabeth Hall last November.

The more you get involved with this club and the good people who are doing all they can to move it forward, the more it pulls at the heart strings.

If that’s how I feel after three years, it’s little wonder that the many supporters who have been watching Roughyeds all their lives, whose passion has been handed down from generation to generation, are so keen that they would follow Oldham to the ends of the earth.

We have a lot of fans like that and it filled with me with great pride to watch our faithful regulars being so gracious in victory at Coventry and lining up to applaud the Bears players off the pitch.

The last ‘Bear’ to walk off was Kameron Pearce-Paul, who was on loan with us last year, and for me it was truly heart-warming to watch our fans being so supportive to an opponent.

Coventry chief Alan Robinson even tweeted something to that effect, so it must have touched him as well as lots of others.

Thanks a lot guys and gals; that was first-class PR for the Oldham club.

It was the sort of thing that has attracted me to this great game of ours since I first arrived on the scene, completely unaware of what it was all about.

I’d go so far as to say that rugby league is the biggest sporting ‘secret’ there has ever been and, speaking as a woman, there must be thousands of my gender out there who don’t know what they’re missing.

In these tough times of falling attendances, the situation requires us all to spread the gospel, to talk-up Roughyeds to friends, colleagues and neighbours and to be proud of OUR sport and OUR team.

Most newcomers to rugby league love it. The hard bit is getting them here in the first place.

It can be done, so let’s do it . . . and let’s tell the world (well, the people of Oldham and districts actually) what we have in this club of ours and how they can be a part of it.

Enjoy the game today. I know I will,