​AUTHOR Craig Halstead will be at the all-important Oldham-Whitehaven game at the Vestacare Stadium on Sunday, selling signed copies of his book, ‘Roughyeds — Against All The Odds’, which retails at £12.95. All profits go to the club. 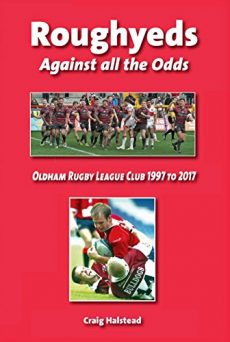 The book covers the first 20 years of the ‘new’ club’s battle to grow and find its own identity and it provides a fascinating story told by players, coaches, fans and club officials.

One example is former director Sean Whitehead’s first-hand account of the launch of Oldham RLFC (1997) Ltd and his revealing thoughts about owner and chairman Chris Hamilton, the one man to hold an official and unbroken connection with the club from its early beginnings in the autumn of 1997 to the present day.

A one-off feature in this Sunday’s Roughyed Review, the club’s 24-page full-colour game-day magazine (£3), is a colouring competition for 12s and under, linked to Roary, the club mascot, and providing cash prizes of £10, £5 and £2.50.

It’s timed to give our young fans something to do in these long, hot days of the school holidays so get out your crayons or paint brushes, you young Roughyeds, and let’s see if you can give Roary some colour. He’s been looking a bit washed out lately !

We also spotlight Joe Snape (11), who won our fans’ best mobile-phone picture competition at the West Wales Raiders game and you can read all the usual features by Anne Kearns, Scott Naylor and George Cowburn plus Dave Naylor’s Fan Focus, squad statistics and his look at Whitehaven.

We spotlight the battle for play-off places; look at three Oldham players who have reached or are on the verge of reaching personal milestones; and provide you, for a bit of fun, with the opportunity to come up with an appropriate caption to a picture which illustrates . . . ??? (now that would be telling, wouldn’t it).

All will be revealed in Sunday’s Roughyed Review, selling at £3 and a good read for fans, young and old alike. If you haven’t seen an earlier issue GIVE IT A TRY !