Crook back in Oldham’s 19

​PAUL Crook, who missed the second half of the York game and the whole of the Bradford game because of a foot injury, is back in Oldham’s 19-man squad for tomorrow’s (Saturday) massive game against London Skolars.

The goalkicking half-back was cleared to play at training last night and he replaces Zack McComb in the 19 who have been named provisionally and submitted to the RFL in accordance with the established protocol.

“Everybody was available” said Naylor, who will pick from these:

The actual line-up, which won’t be revealed until an hour before kick-off, will clearly be very similar to those in the 10-6 defeat at York and the 24-16 loss against Bradford. 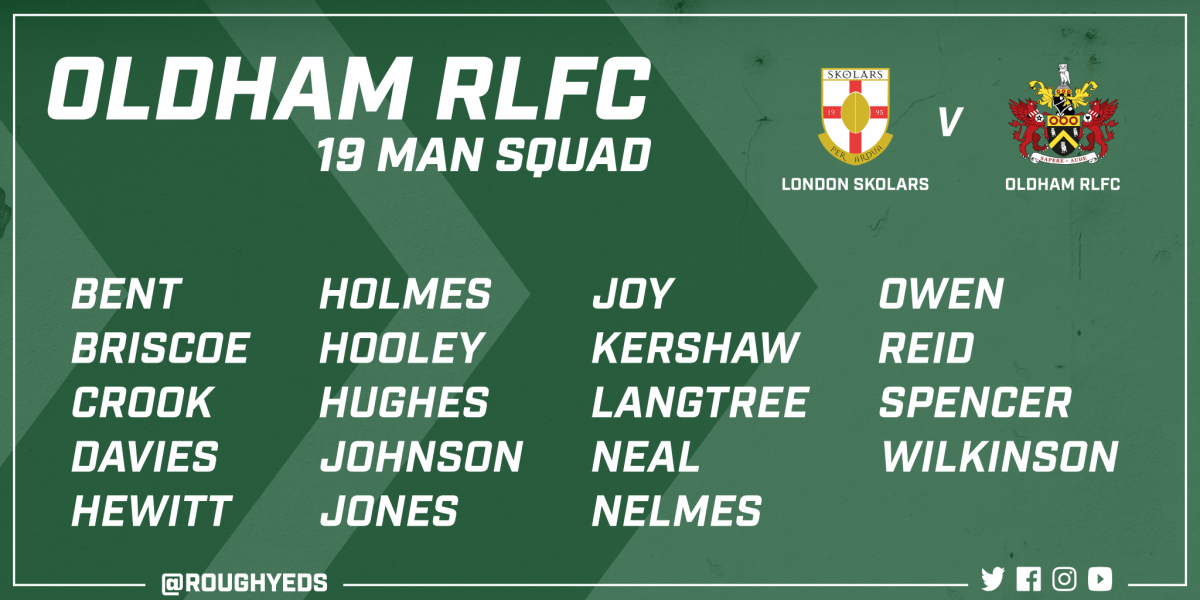 In both those challenging contests against the division’s top two, Roughyeds achieved the remarkable feat of being the only side to score in the second half.

York were ‘nilled’ while Jack Holmes (try) and Luke Hooley (goal) scored for Scott Naylor’s men, who also prevented the Bulls scoring after half-time when Craig Briscoe (try) and Hooley (goal) put points on the board for the home side.

This despite the dismissal of Ben Davies in the 48th minute for dissent; the red card given to Luke Nelmes in the 75th minute for punching Ross Peltier; and the sin-binning of Luke Hooley at the same time for tripping George Flanagan.

All three players were given a one-match penalty notice last night (Thursday) by the RFL’s Match Review Panel and they could miss a play-off shoot-out at Bradford if, indeed, the Roughyeds qualify.

To do so they must beat the Skolars in the last game of the regular season and then rely on York seeing off Whitehaven on Sunday at Bootham Crescent.

York have won their last 14 games and were last beaten at the end of May . . . at Whitehaven.

As far as Oldham are concerned, though, that game will count for nothing unless Naylor’s boys do the business tomorrow in a game that will be played at the Trailfinders Sports Club in West Ealing, London W13 ODD, kicking off at 5.30pm and immediately following the London Broncos v Salford Red Devils game (3pm) in a double header.

“No second chances in this one. If we don’t win our season is over.”

Oldham had a fourth case looked at by the Match Review Panel but in the case of Craig Briscoe his try-saving tackle on Bulls prop Liam Kirk in the 18th minute was considered to involve accidental contact with Kirk’s head so Briscoe wasn’t charged.

His three colleagues were — Davies “for questioning the integrity of a match official”; Nelmes for punching; Hooley for what was described as an “intentional” trip on the Bulls player.

Skolars had four cases under review, arising from their game at Workington, but the verdicts were “sin-bin sufficient” in the cases of Matt Fleming, Mike Greenhalgh and Billy Driver and “no charge” in the case of Vinny Finnigan.