Hughes back in 19-man squad

​KENNY Hughes, out for more than two months with an ankle injury, is back in Oldham’s 19-man squad for tomorrow’s visit of Coventry Bears to the Vestacare Stadium (3pm kick-off).

The other two hookers, Gareth Owen and Matty Wilkinson, are also in, but in another major change half-back Dave Hewitt stands down for only the second time this season.

Coach Scott Naylor said there would be changes and there are, in fact, four of them with Hewitt, Dave Eccleston, Matty Reid and the injured Kyran Johnson replaced by Luke Hooley, Ben West, Adam Jones and Hughes, who’s back after missing the last nine games.

Hooley, who hurt a shoulder at Doncaster; Jones, who damaged his back at work; and Hughes, who went over on an ankle in training, are all back after injury.

The omission from the 19 of full-back Johnson, half-back Hewitt, winger Eccleston and centre Reid inevitably means there will be significant changes in the backs. 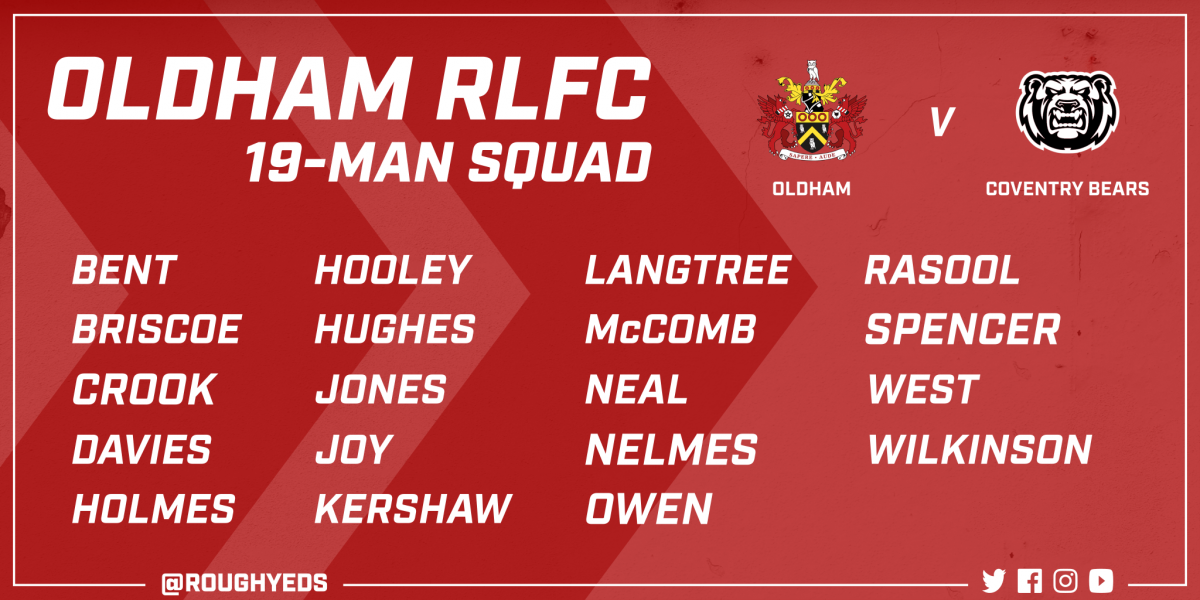 Hunslet and Whitehaven, the next two, are on 28 and 26 respectively.

Scott Naylor and the players, who have had a bonding session this week at a local restaurant, funded by ORSA, are urging fans to turn up on Sunday and get behind them at the start of a four-game September programme that will define their season.

Everyone attending will have the opportunity to purchase club merchandise at 50 per cent off and to buy Craig Halstead’s latest book, ‘Roughyeds – Against All the Odds’ for £10, a saving of nearly £3 and an ideal Christmas present for any Roughyeds fan. (see separate story).