Back the boys as season tickets go on sale

​OLDHAM RLFC will launch its 2019 season-ticket operation tomorrow (Friday, November 2) with a plea to fans to “back the boys” and raise vital revenue.

A reduction in the number of Betfred League 1 clubs from 14 to 11 next season means a programme of only TEN home league games in the regular season, down by three when compared with last year.

That will inevitably result in major reductions in club income.

With that in mind Roughyeds are urging supporters to consider buying a season ticket if at all possible to help the club financially and to “back the boys“.

“This is more important than ever before. We seriously need a good response,” said Anne Kearns, who has been helping to run the club on a day-to-day basis while chairman Chris Hamilton has been on long-term sick leave after major heart surgery.

Everyone who buys a season ticket will get the equivalent of one game free and will also be given a newly-designed Oldham RLFC scarf worth £10, thus making season-ticket discounts even more attractive.

As part of the “back the boys” initiative, match-day admission prices will be pegged at 2018 levels and season tickets (ten home league games) will be sold as follows: 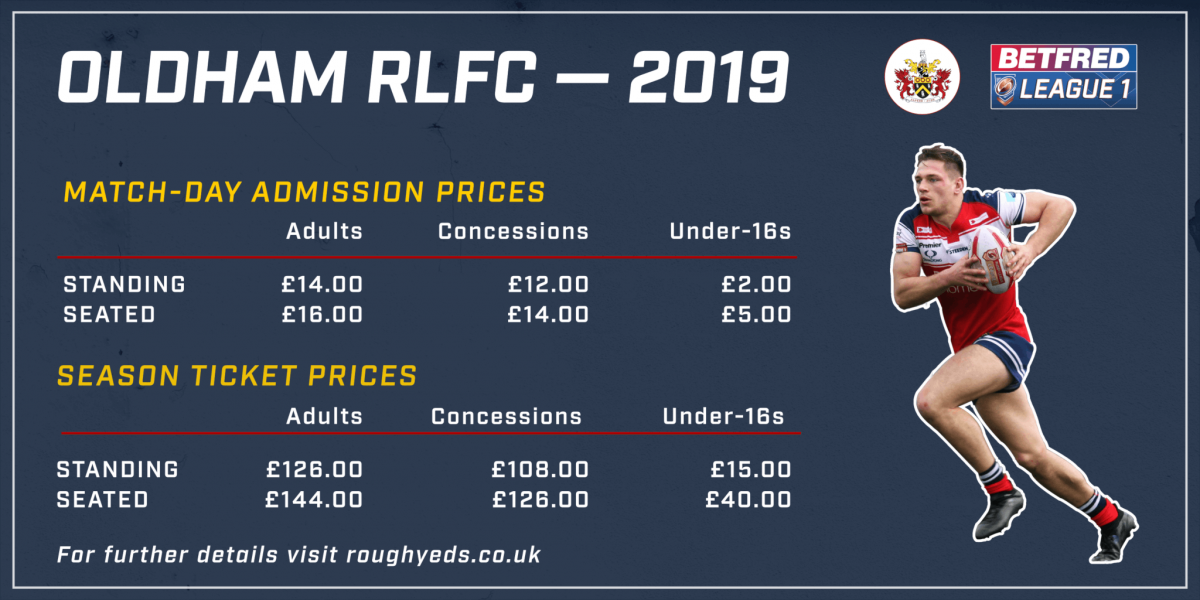 Starting tomorrow (Fri) payment for season tickets can be made by cheque or cash at the Oldham RLFC office inside the Vestacare Stadium or online via the Roughyeds’ online store as a single payment or via our three-month, interest free payment plan.

Fans wishing to take advantage of the three-month payment plan must have paid the first instalment by November 30.

These discounted prices are available only from Friday, November 2 until Friday, December 14, six weeks in which you can “back the boys” and help the club financially to look forward to the 2019 season with confidence.

A season ticket, of course, will be an ideal Christmas present for any Roughyeds supporter or local rugby league enthusiast.

Office opening times for those fans wishing to pay by cash or cheque over the counter will be as follows (starting tomorrow, Friday, Nov 2):

Monday, Wednesday, Friday each week from 10am to 3pm.

Any queries relating to season tickets, office opening times, the Awards Night on Friday, November 9 or anything else for that matter ring Anne Kearns on 07811 988 426.