He follows his former Cougars team mates Richie Hawkyard and Scott Law to the Vestacare Stadium, having signed a one-year deal in the hope of kick-starting his career on the back of a change of luck. 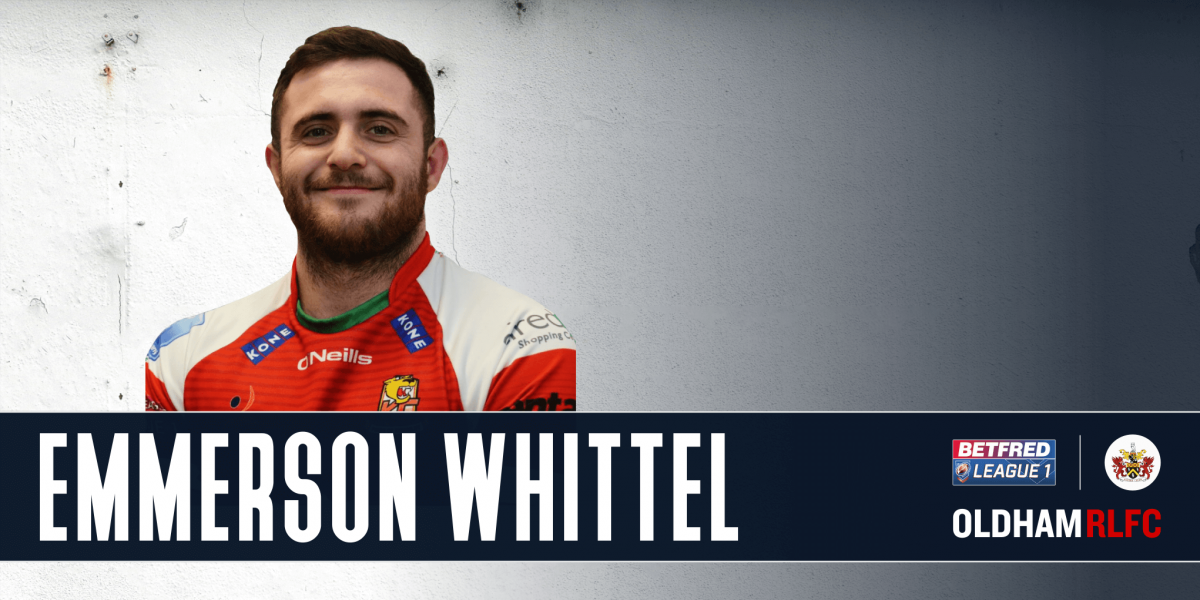 “We’ve done our homework on Emmerson and we’ve heard nothing but good things about him.

“He’s a tough, gritty lad — just the sort we like at Oldham.

“He’ll be training with us for the first time tonight (Tuesday) and I’m sure he’ll fit in really well.

“He’s another new signing in a squad that’s looking increasingly strong and exciting.”

He said that, despite the re-signing of Danny Bridge and the recruitment of Ben Calland, he needed to further strengthen his back-row to compensate for the loss of Danny Langtree, Craig Briscoe and Adam Jones.

Whittel, a Halifax boy, played his junior rugby for Kings Cross Park and was scouted by the Bulls when he was only 13.

He spent several years at Odsal where, as an Academy graduate, he won an under-19s player-of-the-year award and went on to win one Super League appearance against London Broncos under Jimmy Lowes.

He was well-known to Halifax-based coach Lee Greenwood, who was then coaching Gloucester All Golds . And when his deal at Bradford ended, Greenwood took him to the West Country where he played for two seasons — 2015 and 2016.

In 2015, the year Oldham went up, he scored five tries in 22 games, playing twice against the Roughyeds at loose-forward in a Gloucester side that lost only 33-30 at Whitebank and only 42-30 at Cheltenham.

He followed that up with another 24 games in 2016 before Keighley lured him to Cougar Park, initially on a o one -year deal to cover 2017 but then a further two years.
It was in one of his early games with Keighley in February, 2017, that he got caught up in a brawl and suffered a broken jaw in a Challenge Cup third-round bruiser against Fryston Warriors at Post Office Road.

He was out for two-and-a-half months and then in only his ninth game back he tore an anterior cruciate ligament in his knee, which required a joint reconstruction and another long lay-off.

“I’ve played half a dozen games since the operation and I’ve been fine,” said Emmerson, who’s in his final year at the University of Huddersfield, studying electrics and electrical engineering.

He added: “I’m fully recovered. In my first game back I did the full 80 and didn’t have any trouble at all, either with my general fitness or the specifics of the injury.

“My Dad’s a brickie and I’ve been doing a lot of work with him which has helped with my fitness. I’ve also put a lot of effort into other programmes.

“When I returned to team training I was just as fit as anybody else and after a good pre-season at Oldham I’m going to be buzzing.”

Explaining how he came to get linked with Oldham, he said:

“When I got a release from Keighley because of the well-documented problems I contacted my former Gloucester boss Lee Greenwood, who’s now in charge at Dewsbury.

“He was well off for second-rowers but he said he would tip off his old mate Scott Naylor, who would want to make some inquiries about me.

“Scott phoned me about a week later and said he was interested and it all moved on from there.

“I’d been putting out feelers and a few other clubs were interested but I gave it a lot of thought and concluded that Oldham was the right fit for me.

“They’re a very competitive team and hopefully I’ll be able to play a part in helping them to get back into the Championship.

“I spoke to the chairman (Chris Hamilton) and he said that I would progress as a player at Oldham and kick-on with my career after the setbacks I suffered at Keighley.

“After speaking to Chris and Scott that’s exactly what I feel too — and that’s why I signed for Oldham.”