YOUNG Harry Maders has followed in the footsteps of his grandfather and his father by putting pen to paper on an Oldham RLFC contract.

The 19-year-old utility back, from Moorside, has signed his first professional contract in a deal that covers the whole of the 2019 Betfred League 1 season and runs through to November 30. 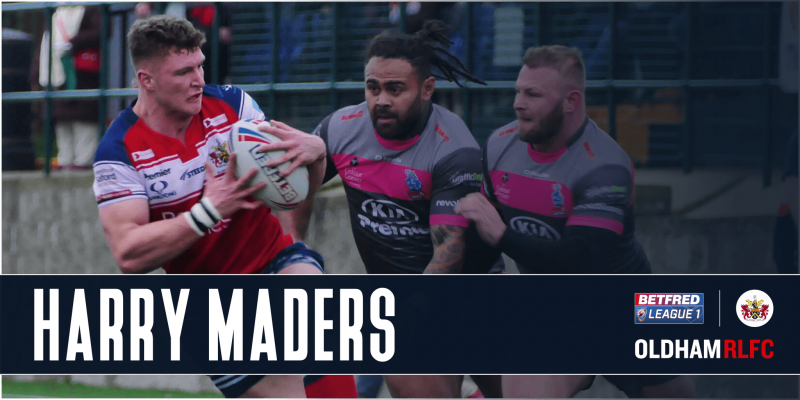 It’s a dream come true not only for the teenager, but for his dad Martin and his grandad Dennis, who were both proud to sign for their home-town club, Dennis back in 1965 and Martin on December 29, 1997 when the then fledgling Oldham RLFC (1997) Ltd paid Huddersfield an undisclosed fee for his services.

Three days later Martin was in the re-formed Oldham club’s side that played its very first game at Rochdale and won the Law Cup with a convincing 36-16 win in front of more than 3,000 fans, most of them from Oldham.

Ten of the 18 were Oldhamers and their pride and passion glowed like beacons on a night charged with emotion.

Martin went on to play 18 games for Roughyeds, exactly the same number of first-team games that his dad Dennis played for Oldham between 1965 and 1970.

A back-row forward, Dennis spent most of his Watersheddings days in the ‘A’ team, but a highlight of his career was an appearance in the 1968 Lancashire Cup final against St Helens at Central Park.

More than 50 years on teenager Harry works for his grandad Dennis in the family electrical business — and Dennis is still supporting his home-town club via membership of its Club Cash lottery.

“I’m proud to sign for Oldham and I know my dad and grandad are too. I’ll be giving it my best shot, that’s for sure.”

He becomes the youngest member of Oldham’s 24-man squad and its fourth Oldhamer alongside club captain Gareth Owen, Phil Joy and Danny Bridge.

He played at Waterhead from the age of seven and then, aged 15, went to Salford Red Devils on scholarship. He playedn in the under-16s and then the under-19s before heading off to Huddersfield where he had a year in the under-19s.

He trained with Oldham throughout their pre-season work for 2018 and then went back to Waterhead.

He again impressed Scott Naylor and his backroom team during this year’s pre-season work and was rewarded with the contract after playing well as a trialist in warm-up games against Championship opposition.

“We were more than happy to look at Harry again 12 months down the line. He was very professional in everything he did, attending and working hard in 99 per cent of our sessions, spanning nearly three months.

“We signed him initially on trialist forms so he could play in our pre-season games and he didn’t look at all out of place against Championship sides.

“He has built himself up and improved massively since last year. I know he will continue to work hard and get better and better as the season goes on.”

This story illustrates perfectly that persistence, determination and consistency of purpose can and does pay off.

It also underlines that there is a future at Oldham RLFC for local lads who have passed through the systems at Super League clubs but then find themselves back at their amateur clubs but still with loads to offer the game.