Another promising performance, this time in defeat

ROUGHYEDS couldn’t make it three pre-season wins in a row, but in a nip-and-tuck 22-18 loss against Swinton at Sale they again produced a promising performance that augurs well for the Betfred League 1 campaign that lies ahead.

Each side scored four tries, but with the scores locked-up at 10-10 early in the second half Roughyeds failed to capitalise on their momentum and, having been let off the hook, the Lions quickly went back down to the other end to grab a third try and take a lead they never lost.

Swinton looked far better prepared for the 2019 Championship than did either of the two sides Oldham had beaten previously, Barrow and Rochdale, but there was still little to choose between the sides in a game which could have gone either way.

The difference was two conversions, Oscar Thomas landing three from four for the home side while the visitors could manage only one from four in an exceptionally strong wind that was as unpredictable as it was bitterly cold, fierce and blustery.

Thomas managed one goal from two shots that were wide out, but his decisive two goals in the second half were from relatively close to the posts.

Oldham new boy Adam Brook, who took over the marksmanship when Dave Hewitt (heavily strapped thigh) was taken off in the second half, did not have that luxury.

Both his kicks were from out on the right-hand touchline and in these conditions he was always going to be up against it.

Having used 17 players at Barrow and 18 against Rochdale, Roughyeds fielded 20 in this one and took the opportunity to give every available player a chance to show what he could do.

Full-back Hawkyard, who scored the first of Oldham’s four tries, was taken off as a precaution at half-time with a sore calf and took no further part.

Winger Aaron Jones-Bishop also sat out the second half with Harry Maders replacing him on the right flank.

There were a few interchanges at half-back where Hewitt and Anthony Bowman paired up from the start. 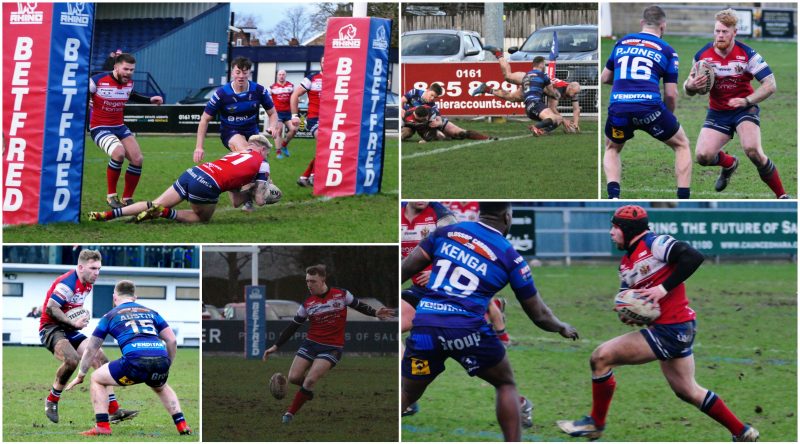 Later in the game Bowman was given a run in the second-row and new-boy Brook got on at half-time, first partnering Hewitt and then finishing the game alongside Gareth Owen when ‘Chewy’ was given a well-earned break.

Considering it was Brook’s first game in Oldham colours after only one training session and one Captain’s Run with his new team mates, the loanee from Halifax looked a natural in a leadership role and never once looked hesitant or uncomfortable in taking command of a situation and making decisions.

The big eye-catcher in the second half, though, was full-back Kyran Johnson, who took confidence from a big early tackle on a rampaging Adam Jones to use his speed and fleet-of-foot to make big yards on kick returns and to cause lots of trouble in the Lions rearguard when he linked up with the attack.

Zack McComb, receiving wide out from Brook and Johnson, scored his fourth try in three games, again with little room in which to work, and underlined how well he is playing in this build-up to the season.

In the battle of the packs, Luke Nelmes needed stitches in a nasty head wound, but returned for a second spell with his head heavily bandaged,

Half-backs Thomas and Fairclough did the business for the Lions, Each scored a good try while Fairclough’s kick to the corner created a try for Matty Ashton before Thomas linked up with Rhodri Lloyd to set up the best try of the game for full-back Jack Hansen.

Roughyeds soon went 4-0 down, but they didn’t take long to get in front when Bowman grubber-kicked superbly into the Lions in-goal area on the last tackle and Hawkyard followed up to score under the posts.

Hewitt’s goal gave the visitors a 6-4 lead, but they were again to be caught out by a kick to the corner, as they were twice against Rochdale, for Ashton to score and Thomas to add the angled goal — a superb effort in such a wind.

The sides were scoring in turn, as they did from start to finish, and next yp came a Lee Kershaw try in the corner after slick right-to-left handling featuring Hewitt, Emerson Whittel and Jack Holmes.

Roughyeds continued to dominate after the break and in the first few minutes Matty Wilkinson twice went close; Scott Law was held up over the line on the last tackle; and Anthony Bowman forced a drop out with another accurate grubber.

By somehow allowing Lions to retrieve the ball from a short drop out and then giving away a penalty, the visitors lost their grip on the game and were immediately made to pay for these lapses when constant-threat Thomas thew a dummy to the left flank and cut back inside to score Swinton’s third try.

The Johnson-inspired McComb try kept Oldham in the hunt, but Hansen’s classy try, made by Lloyd and converted by Thomas, but Swinton two scores clear before the stylish-looking Johnson again linked up with the ‘threes’ to create a gap and accelerate through it to register Oldham’s fourth try near the end.

The action still wasn’t over because a free-for-all broke out in which the referee consulted with his touch-judges before awarding a penalty to Lions, whereupon Oldham captain Gareth Owen objected and was sin-binned for dissent.

Thoughts now turn to Newcastle Thunder’s visit to the Vestacare Stadium next Sunday (3pm) and what promises to be another exciting game of pre-season football against a side being freely tipped to be Betfred League 1’s surprise packets.