​GREAT team spirit, top work ethic, subtle skills and individual expertise were the hallmarks of our 24-8 win against derby rivals Rochdale Hornets in a typically hard-fought Law Cup clash at the Vestacare Stadium.

Having won 24-10 at Barrow and 24-8 at home against another 2019 Championship side, Scott Naylor’s new-look squad couldn’t possibly have done more to get local rugby league fans talking about this Oldham squad ahead of the forthcoming Betfred League 1 campaign.

They still have to take on Swinton Lions at Heywood Road next Sunday and Newcastle Thunder at the Vestacare Stadium on Sunday, February 3 to complete their warm-up programme, but so far so good; the signs are extremely encouraging.

Said head coach Scott Naylor: “I’m very pleased indeed. In a game like this, where the Law Cup is at stake in a clash of derby rivals, the result is everything.
“The importance of that result for the two clubs and for rival sets of fans cannot be over-estimated.

“And for us to perform like that against a Championship side was hugely encouraging. I thought that, in many ways, we were better than we were at Barrow. We looked more like a team than last week and that’s saying a lot because we didn’t do so bad at Barrow.

“The new lads again showed they are fitting in really well and it was nice to win the cup and to give our fans the local bragging rights for another year.

“Individually, there were a lot of good performances. I’ve been trying to get hold of Richie Hawkyard for the past four years and now we’ve finally done it people will see why.

“But I also thought Emerson Whittel did especially well in his first game. He hasn’t played a lot of rugby recently but to come back like that showed he is a player of real quality.

“There were lots of other individual positives too, but the main thing was the teamwork and the obvious togetherness of the group and we have to keep it together and keep on getting better as we head towards the start of the league campaign on February 17.”

In their two games so far, both against Championship opposition, Roughyeds have scored nine tries and conceded four — three of them from kicks and the other from an Oldham breakdown.

At the post-match presentations, Gareth Owen stepped forward to receive the Law Cup from club official Anne Kearns after Richie Hawkyard had been presented with his Oldham RL Heritage Trust Trophy as man-of-the-match by Sheila Somerville of ORSA.

The squad then posed for pictures with the trophies before heading off towards the tunnel where they were greeted with rapturous applause by Roughyeds supporters gathered at that end of the ground.

Roughyeds made one change to last week’s starting 13 with Whittel in from the beginning and Jack Spencer on the bench, although there were two very early substitutions with the two starting props, Phil Joy and Scott Law, replaced after quarter of an hour by Luke Nelmes and Spencer.

By this time Roughyeds were already 6-0 up and they had blown a clear-cut second chance when Joy lost possession as he crossed the line.

The early score was a belter. A penalty put the home side deep into Hornets territory. Hawkyard joined up with quick left to right passing across the line and Zack McComb finished off in the corner with an explosive burst to the line in which he carried two defenders over with him. Dave Hewitt goaled off the touchline and Oldham were on their way.

Deceptively strong, McComb went on to have another big game at right centre, just as he did at Barrow.

It was tough and extremely competitive but Oldham went on to increase their lead midway through the half.

Initially, Harry Maders did well on the left flank to retrieve possession for his side and make inroads up the middle.

Matty Wilkinson, who had replaced Gareth Owen a few minutes earlier, then made his presence felt with a break from dummy half before finding Anthony Bowman, who temporarily abandoned his more subtle skills to see the line ahead of him and to brush past his one-on-one defender to score. Hewitt’s goal made it 12-0.

Hornets should have made more of Scott Moore’s 40-20, but Oldham defended strongly and got their reward when they stretched their lead to 18-0 just before half-time.

It was a cracking try, the best of the game, in which forwards and backs combined and handled beautifully before Whittel unleashed left-centre Jack Holmes with a defence-splitting ball that enabled Holmes to swing inside off his left foot and race away to score under the posts from about 30 metres out. Hewitt again added the extras. 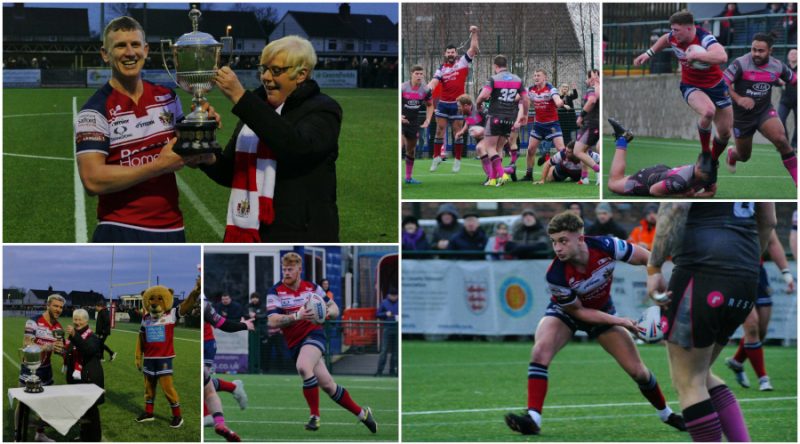 Roughyeds weren’t quite as dominant in the second half as Hornets stepped up their game and came more into it.

They desperately needed to score first and they did so when Stuart Howarth kicked for the left corner and Ben Morris soared high into the air to collect under pressure and score in the corner.

Kyran Johnson was on for Oldham in the second half, replacing Maders on the left flank. He looked sharp too, making a couple of exciting dashes on kick returns.

A great tackle by Aaron Jones-Bishop saved another Hornets try before young Jamie Greenwood came off the bench as Oldham’s third hooker of the game to make a tremendous impact.

His chip into the Hornets goal area forced the visitors to drop out from under their posts and in the next set Greenwood struck from dummy half to kill off any fears of a Rochdale revival.

He scored a superb solo try with swerve, speed off the mark and balanced running to go under the posts and give Hewitt another easy goal for a 24-4 lead.

With a few of their former players in the crowd (Danny Langtree, Richard Lepori and Adam Clay to name but three), Oldham weren’t to seriously threaten again, but Hornets managed a late consolation try with a carbon-copy of their first score, this time Brandon Wood getting the touchdown from Howarth’s cross kick to the corner.

Roughyeds were proud and worthy winners and supporters left for home happy in the knowledge that things are looking good for the season that stretches ahead.

Last word from Scott, who added: “When we were winning the wrestle I thought we were very quick and lively around the ruck.”