It was the perfect start to the 2019 season for Scott Naylor’s side and exactly the sort of enthusiastic and highly committed team performance he was looking for ahead of next Sunday’s Law Cup clash with derby rivals Rochdale Hornets at the Vestacare Stadium (3pm kick-off).

Barrow had the better of the early exchanges, but once Oldham levelled after half an hour they grew in confidence, went from strength to strength and scored five unanswered tries to comfortably and deservedly win the first of their four warm-up games.

Teamwork was key, but there were outstanding individual offerings too by full-back Richie Hawkyard, prop Scott Law and two-try centre McComb.

Both sides were missing some senior men, but this was still a strong Barrow line-up which included the likes of Jamie Dallimore, Jono Smith and new signings Tee Ritson, Jake Spedding, Deon Cross and Jordan Walne.

Roughyeds fielded half a dozen debutants in star men Hawkyard and Law (no wonder they picked up most of the individual awards at Keighley last year), Aaron Jones-Bishop on the right wing, Anthony Bowman in the halves, Ben Calland as right-side second-rower and 20-year-old hooker Jamie Greenwood on the bench.

They also gave trialist Harry Maders two spells on the left wing, including a start, and like every other member of the squad, he did everything that was expected of him.

Barrow should have made more of an early left-flank break but credit the visitors with enthusiastic scrambling and hard work in defence which was to become a hallmark of this performance.

Barrow’s only try of the first half came in the 14th minute when a left-side Oldham raid broke down and home winger Adam Ford was sent clear from well inside his own half to score from long range.

Oldham hit back when Bowman’s clever offload, allied to slick handling by Hawkyard and Jones-Bishop, gave Calland a chance to score in the corner.

It took some scoring, but he took his chance well, as did McComb three minutes later when quick hands from a left-side scrum saw Bowman feed the linking-up Hawkyard, who gave McComb the opportunity to attack his defender’s outside shoulder and go past him to score. 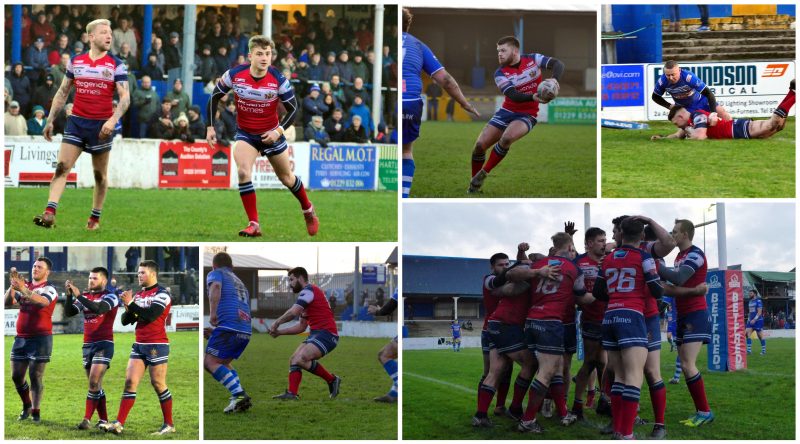 Oldham led 8-4 at the interva,l whereupon Scott grasped the opportunity to look at his options.

Captain Gareth Owen, who started at hooker before making way for Willkinson, returned at half-back for Bowman, while young Greenwood was given his chance at nine.

Kyran Johnson replaced Maders on the left wing, but 15 minutes into the new half, Hawkyard earned himself a rest; Johnson went to full-back; and Maders returned to the wing.

Before that, the Law man crowned a first-class, energetic debut with a solo try under the sticks which provided Hewitt with his first goal.

Oldham were well on top by now and on the back of four penalties in a row McComb again exposed weaknesses in Barrow’s left-side defence to crash over after leaving a couple of defenders behind him.

Barrow were twice forced to drop out under their sticks before Wilkinson went agonisingly close to putting in a colleague with a flat pass.

The home side managed to hold on, but when Dallimore failed to find touch with a penalty you sensed this was going to be Oldham’s day.

Indeed, the visitors went 24-4 up when the returning Wilkinson spotted space behind Barrow’s defensive line, chipped ahead, got his boot to ball a second time and then touched down behind the posts.

Barrow didn’t give up and they grabbed a late consolation try when a high cross-kick into a swirling, unpredictable wind bounced kindly for Jake Carter to touch down and for Dallimore to convert.