​ADAM Brook, the half-back who has joined Oldham on a season-long loan from Halifax, goes straight into the provisional 19-man squad for tomorrow’s (Sun) pre-season derby clash against Swinton Lions at Heywood Road, Sale (3pm kick-off).

Danny Grimshaw and on-loan Lee Kershaw are also in line to make their first Roughyeds appearances of the pre-season so far, ‘Grimmer’ having been cleared to play following a hamstring pull which kept him out of the squad that beat Barrow Raiders away and then retained the Law Cup with a win over Rochdale.

In the impressive 24-8 win against Hornets, back-row pair Liam Bent (58) and Ben Calland (47) made an astonishing 105 tackles between them.

They will have to do a lot more tackling against a strong-looking Lions outfit which can be expected to give Roughyeds their biggest test so far, but one which Scott Naylor’s men are eagerly looking forward to.

This will be the first head-to-head of these two long-established Lancashire rivals since 2017.

More than 1,000 fans saw Swinton win comfortably in the final game of the Championship Shield to retain their second-tier status and to condemn Roughyeds to a return to League 1.

The bad memories of that day will help to inspire Roughyeds as they seek to take a Championship scalp for the third Sunday in a row.

Admission prices (all offering the option of a main-stand seat) are as follows: Adults £14, Concessions £10, juniors £3.

Scott and the boys hope as many fans as possible will make the short journey to Sale to support Roughyeds in their bid to make it three wins in a row.

Let’s back the boys and make it happen ! 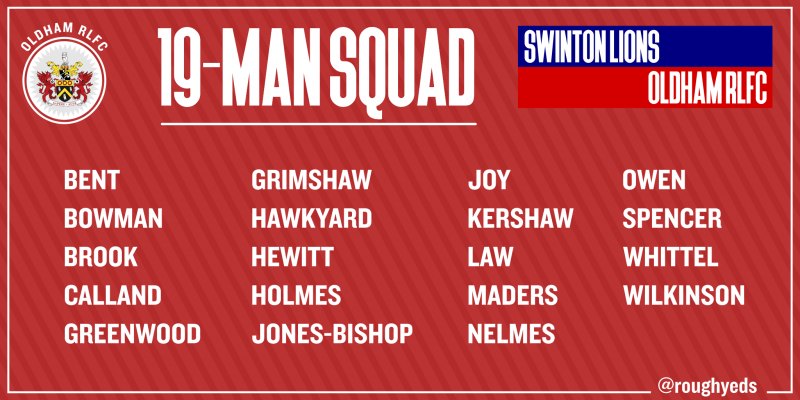