Roughyeds bring in another half-back on loan

​ROUGHYEDS have signed half-back Adam Brook on a season-long loan from Halifax.

The 24-year-old former Bradford Bulls academy and Keighley Cougars player will join up with Oldham at tonight’s (Tuesday) training session.

“We’ve been looking at bringing in another half-back for a while.

“Adam has a very good kicking game; he’s of the right age; and he hasn’t been getting much game time at Halifax.

“We’ve got Chewy (Dave Hewitt) and Paul Crook, who is now on the coaching staff but also injured and unavailable to play.

“Anthony Bowman has been partnering Chewy and doing a fantastic job, but we didn’t bring him in as a half-back. He can play in three or four different positions which makes him very valuable indeed.

“Adam’s arrival doesn’t only strengthen the squad numerically, but it gives me options in a key position where we have not had options previously and where we had to ask Gareth Owen, a hooker, to step into the breach more than once or twice. 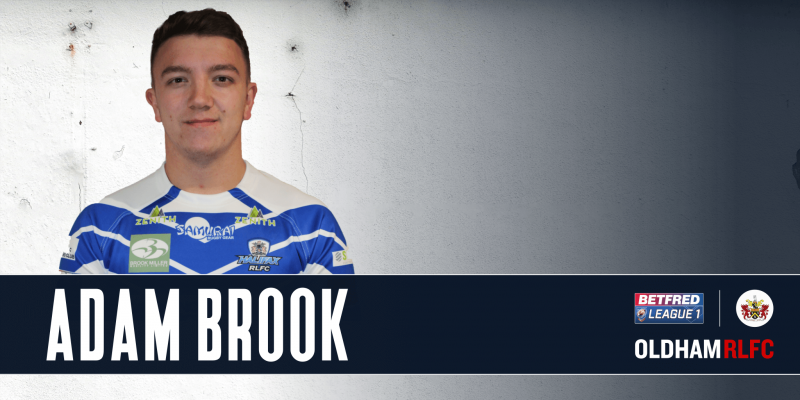 So what do we know of Adam Brook, a trainee quantity surveyor with a Halifax firm, who lives in Triangle between Sowerby Bridge and Ripponden ?

From the age of six he was coached by his Dad at Kings Cross community club in Halifax where he played in a side that won age-group town and county cup finals.

Aged 15, he won a scholarship with Bradford Bulls and he passed through the academy and reserve-team systems at Odsal before signing a two-year contract with the then Super League club when he was 20.

A year later he went out on loan to Keighley Cougars and eventually it became a permanent arrangement in which he signed to stay at Cougar Park for two years.

He played nearly 50 games for Cougars between 2015 and 2017 before transferring to his home-town club Halifax from where he played some games with Newcastle Thunder on dual-registration last season.

“When I knew Oldham were interested I spoke to Richard Marshall (Halifax coach) and told him I would love to go and things moved on from there.

“There are a few Halifax-based lads at Oldham now and I know some of them well, especially Emerson Whittel , a good pal of mine whom I was with at Kings Cross, at Bradford and at Keighley.

“I was also with Richie Hawkyard and Scott Law at Cougar Park and it will be nice to link up with them all again at Oldham.”

The 20-year-old Wakefield Trinity winger, who will also be on a season-long loan at Oldham, played 80 minutes for Trinity in a friendly at Newcastle on Saturday.

It was thought he would play considerably less minutes than that and would then link up with Oldham the next day to feature in the Law Cup game.

“He rang on Saturday night to say he played the whole game, so it wouldn’t have been right to ask him to turn out again 24 hours later.