NO matter which team you think played the better on the day and deserved to win, the fact remains that Oldham were denied at least a draw — and possibly a win —- when they had a try disallowed for offside in the dying seconds.

A no-holds-barred thriller thus ended with a 32-28 win for Workington Town in front of a crowd nearing 800 — one of the best at the Vestacare Stadium in recent years.

From a quality rugby point of view it wasn’t a classic — there were too many stoppages and penalties for that — but for intensity, passion, purpose and drama it was about as good as it gets.

Rival coaches Scott Naylor and Leon Pryce predicted ahead of the game that it would be close, physical and full of passion — and they were proved right.

For those fans who like a honest-to-goodness battle with the result in the balance until the final hooter it was the real thing and surely a reason for coming back for more when Whitehaven are at the Vestacare this coming Sunday, February 24, 3pm kick-off.

Such was the competitive nature of this clash of two teams fancied to be among the end-of-season prizes that both sides were put on team warnings in the second half and both had incidents placed on report.

Penalties were 10-9 to Oldham; it was 16-14 to Workington at half-time; the lead changed hands four times; and there was drama in the dying seconds when Roughyeds were given a penalty at half way after the hooter had sounded.

From the kick to touch the ball was shifted across the field from left to right and Adam Brook hoisted a high kick which Anthony Bowman chased; leapt high; gathered it on the full despite being challenged by two defenders; and gleefully dived in for what he thought would be, with the kick to come, the winning try.

Roughyeds fans went wild with delight and those Oldham players who were close to Bowman mobbed him with congratulations.

Then they realised the referee was standing his ground close to the point where Bowman collected the kick and had, in fact awarded a penalty to Town for offside. 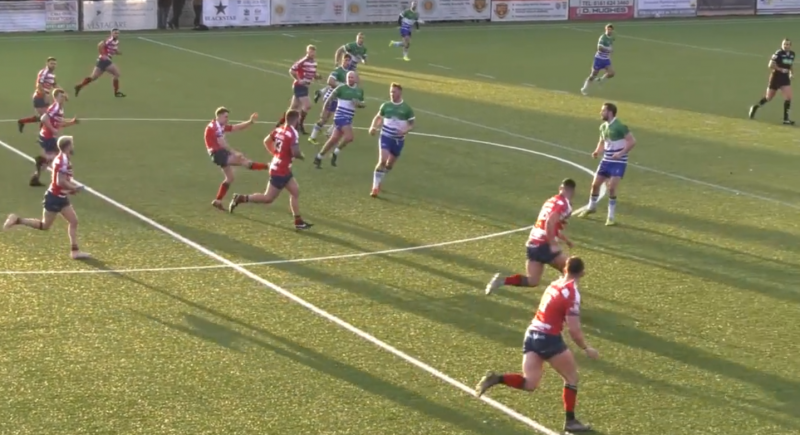 The visitors merely carried the ball dead from the penalty and that was that; game over; early spoils to Workington in the Betfred League 1 promotion race.

It was a cruel blow for Roughyeds and their fans but some would argue it would have been even crueller on Town to lose a game in those circumstances which they dominated territorially for long periods.

Indeed, there was a feeling in the Roughyeds camp afterwards that they could only blame themselves for this opening-day defeat.

By the time they were 12-0 down, inside six minutes no less, they had touched the ball once and then they lost it on the first tackle.

They showed lots of resolve and resilience to come back from that and build a 28-20 lead with quarter of an hour left, but then it all went pear-shaped again because of errors and an inability to close down the game . 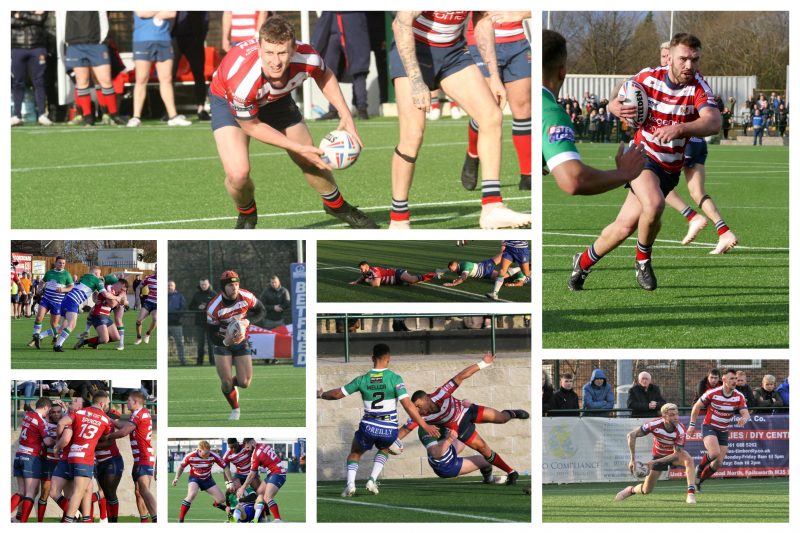 In a throwback to several games last season, they were in a relatively strong position near the end but then capitulated and paid the ultimate price.

They could claim with justification that a Town defender should have gone to the sin bin after holding down Zack McComb when the centre’s strong break caused mayhem in the visitors’ rearguard with 15 minutes left on the clock.

It was Hewitt’s goal from that penalty that gave Roughyeds a two–score lead, but it was a puzzle why Town still had 13 men on the field.

The whole momentum of the game changed, however, when the usually-reliable Hawkyard failed to collect a Town kick cleanly near half-way and, thereafter the Cumbrians pounded Oldham’s line unmercifully.

Doran, Forber and Worthington were all held up over Oldham’s line before Scott’s boys were put on a team warning.

Luke Nelmes, Titus Gwaze (twice) and Scott Law also made vital mistakes at a time when Oldham were in front.

This enabled Town to apply constant pressure which eventually paid dividends when they went in for two match-winning converted tries.

Best to watch of Oldham’s four tries were the second by Hawkyad and the third and fourth by right-wing Aaron Jones-Bishop.

He finished strongly in both instances, the second with a spectacular dive and twist which was a similar effort to many you see on TV when Super League wingers touch down spectacularly,
Oldham’s tries were scored by Phil Joy, Hawkyard and Jones-Bishop (2) while Dave Hewitt kicked six goals from eight attempts .

Town scored six tries, two of them from kicks, to Oldham’s four.