Eyes down for Challenge Cup draw

LUCKY for some ? Oldham are numbered 13 in the third-round draw for the Coral Challenge Cup which will be made this evening (Monday) in Coventry.

Into the hat will go the 11 Betfred League 1 clubs plus the 13 winning teams from round two.

None of the Oldham community teams was involved but nearby Rochdale Mayfield had an excellent 30-20 win at Thornhill Trojans (Dewsbury) to command the No 14 ball in the draw, one behind Oldham’s.

The draw will be shown live on the BBC Sport website, with Dave Woods, from 6pm. 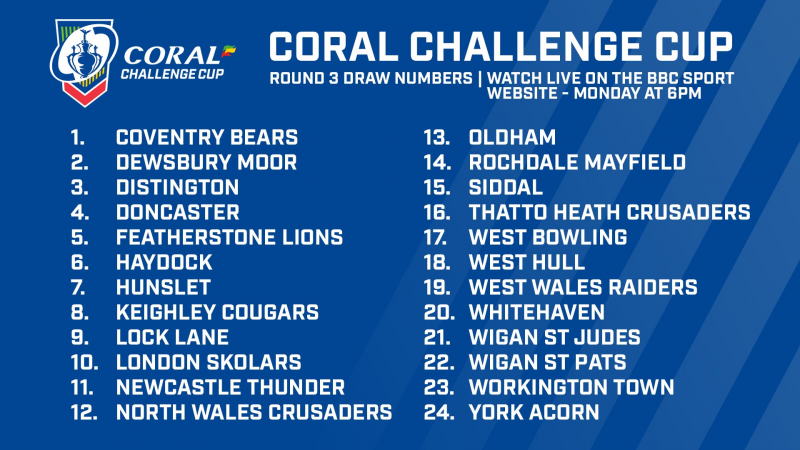 Last year, Roughyeds beat Featherstone Lions 42-0 at the Vestacare Stadium in round three and then had a great 27-6 win at Halifax in round four (what a great night that was) before going down 32-0 against Hull KR at Bower Fold in round five.

Once the draw has been made and we know who we play on the weekend of March 9 and 10, thoughts will quickly revert to the big game this Sunday at the Vestacare Stadium when we open our Betfred League 1 campaign with a visit by highly-fancied Workington Town.

Scott Naylor has stressed on numerous occasions how important it is that we start the season on a high.

Club captain Gareth Owen, meanwhile, has already set the bar of expectation high by revealing that the squad has set a top-place finish and automatic promotion as the players’ goal for 2019.
Three of the first four League 1 games are at the Vestacare Stadium, against Workington, Whitehaven and London Skolars so we’ve got to make sure we take advantage of playing in front of our own fans so often and so early in the campaign.