IT might have been daylight robbery, but there were two massive positives on a wet, drizzly day in Wrexham . . . the character Oldham had in abundance and the terrific travelling support for Scott and the boys.

Trailing 14-0 after an hour and struggling to find what was needed to overcome a dominant, spirited North Wales Crusaders side that adapted well to wet-ball conditions, Roughyeds looked well beaten.

You wouldn’t have found many in the Queensway Stadium realistically thinking Scott’s boys could come back from a deficit like that on a soggy pitch against a home side that was pumped up to do a job.

Despite their disappointment, though, an estimated 150 fans from Oldham never lost their heart and voice in support of the men in chocolate and yellow.

If true support is measured by its incessant decibels even when things are going wrong and defeat is anticipated, this was a perfect example of how much our club and our team mean to the diehards.

And how magnificently the boys responded once Lee Kershaw gave them a sniff with a great try in the corner midway through the second half.

The real turning point was yet to come, but for starters this was good enough.

Throwing his arm in the air and almost begging Dave Hewitt to give him the ball, the young winger rose to collect Hewitt’s pin-point kick; somehow used his balance and strength to avoid touch under great pressure; and then went first one way and then the other in the space of a couple of metres to score his side’s first try in the corner.

All this remember with a ball that was like a piece of soap and on a pitch that was nearly as wet as the surrounding running track with its pools of standing water.

Hewitt couldn’t convert off the left-hand touchline and at 14-4 down as the game edged into its last ten minutes, the visitors still had a Welsh mountain to climb if they were to avoid their second defeat in their first three league games.

Crusaders were again on the attack in pursuit of the coup de grace when Kershaw struck again.

Hitting the ball on the intercept at full throttle, Oldham’s man of the moment raced 80 metres unopposed to score by the posts and to offer Hewitt an easy extra two.

At 14-10 with ten left the momentum was with Oldham for the first time in the game.

Kershaw’s second try was the game-breaker; the point when Oldham knew they finally had the measure of their opponents; and the point when a tired and weary-looking Crusaders appeared to have self-doubt for the first time in the game.

Roared on by fans who probably never thought they would be in this position, Roughyeds looked more controlled and more comfortable than at any time previously and, sure enough, they had five minutes to spare when they snatched the lead for the first time.

They worked the ball into the home 20-metre zone where the classy Anthony Bowman, not for the first time, pushed his head through the defensive line and delivered an absolute beaut of a pass to his left where he found eager-beaver Hewitt in close support.

In he went and with a little imagination and exaggeration you could think the swell of the roar might have been heard back at the Vestacare Stadium.

Hewitt’s relatively easy conversion was the match winner on a day when Roughyeds were down to 12 men for ten minutes either side of half-time following Aaron Jones-Bishop’s yellow card for taking Rob Massam’s legs over the horizontal.

Crusaders had ex-Oldham winger Eccleston sin-binned in the dying seconds for a similar challenge on Kershaw, but his yellow was too late to affect the outcome one way or the other. 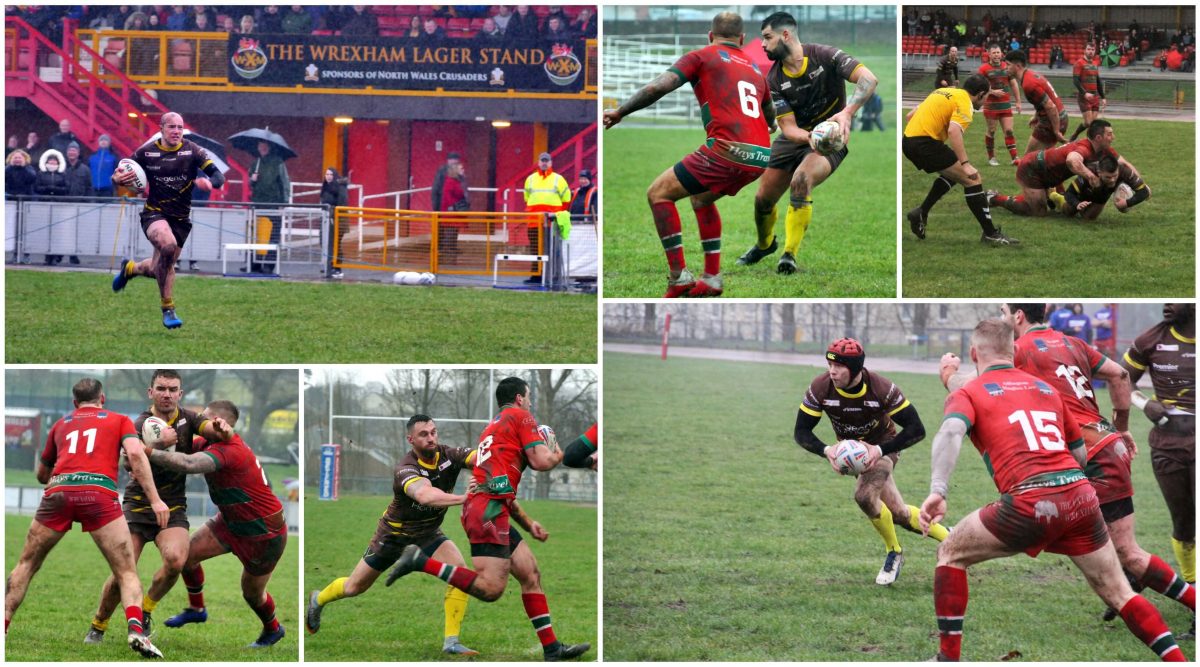 With Steve Roper and Ben Stead kicking Roughyeds to death on the back of a powerful pack display in the first half, Crusaders were full value for their 14-0 lead.

They led 6-0 at half-time with a try by centre Earl Hurst on a final pass from Roper,,who then struck a 40-20 to keep Roughyeds on the back foot.

For the first hour most of the battle was played out in Oldham’s half and when the visitors did finally break out of the Crusaders’ vice-like grip they struggled to bust open a cast-iron defence and were often forced into error.

When big sub Brad Brennan crashed over the near the posts with two or three defenders all over him, and Stead kicked the goal, Oldham were in a massive hole.

A couple of minutes later, when Stead stroked home a penalty goal for 14-0 lead, it felt as though the game was up.

If Oldham fans stopped believing they certainly didn’t show it — and how they were rewarded !

Danny Grimshaw went desperately close to grabbing the lifeline Oldham needed so badly and then, at last, it all started to go right.

As the balance of power began to swing, ever so slowly at first but then gathering in momentum, ‘Grimmer’ and Zack McComb were strong in the centres; Phil Joy came into his own up the middle; and the two who had shown touches of class throughout, Kershaw and the extremely gifted Bowman, went from strength to strength.

Hewitt, too, contributed massively, not only with his beautifully-flighted and angled kick to set up Kershaw’s first try but with his razor-sharp support play that enabled him to go in for the winner.