LOCAL lad Harry Maders played in each of our three pre-season games but in this his debut in a seriously competitive game he celebrated with a hat-trick of tries in our 80-10 stroll into the fourth round of the Coral Challenge Cup.

Opponents Haydock scored two second-half tries, one converted, but as the score would suggest they found it difficult to handle an Oldham side that produced a disciplined and polished performance to run in a total of 14 tries despite a fierce wind that had the top of the posts swaying and did tricks with the ball when it was in the air.

An indication of how well Roughyeds moved the ball around with their wing-to-wing football was Maders’ hat-trick on the LEFT wing and another three-try performance by Zack McComb from the RIGHT centre berth.

Hooker Matty Wilkinson, terrorising the Haydock defence from both dummy half and as a free-range runner in a broken field, was the home side’s third hat-trick boy.

Other tries were scored by lively full-back Kyran Johnson (2) and Anthony Bowman, Emmerson Whittel and Adam Brook, who excelled with a goalkicking performance that yielded a dozen conversions from 14 shots — a remarkable effort in such high winds.

To describe each of the tries would produce an epic of ‘War and Peace’ proportions. Suffice to say each had its merits and several of them resulted from quick, snappy handling and keen backing up even though, it has to be said, Haydock’s resistance wasn’t one of the best.

Brook, on the left, and Bowman, on the right, were the master craftsmen who made it all happen and provided opportunities further out for the likes of Maders and McComb.

He kept to his word, resting Ritchie Hawkyard, Lee Kershaw and Danny Grimshaw in the outside backs; Dave Hewitt in the halves; and Gareth Owen in the forwards.

Into the starting line-up stepped Johnson, Maders, Jack Holmes, Brook and Wilkinson with Jamie Greenwood recalled to the bench.

Holmes captained the side and Brook, doing the goalkicking in Hewitt’s absence, did enough to win the club’s official man-of-the-match award. While his uncanny marksmanship in such conditions went a long way towards his man-of-the-match accolade, there was a lot more than that to his overall performance as left-side play- maker.

He scored a clever try himself early in the second half and his vision and execution of a cross-kick to the unmarked Maders for the winger’s second try was an absolute gem.

On the other side of the field McComb’s hat-trick owed as much to Bowman’s astute delivery of the right pass at the right time as it did to a Haydock defence that had simply no answer to the speed and quality of the Roughyeds attack.

Bowman resumed after treatment for a back injury, but it wasn’t long before he was taken off as a precautionary measure, whereupon Greenwood was shipped out to half-back and Wilkinson returned from the bench to go in at dummy half. 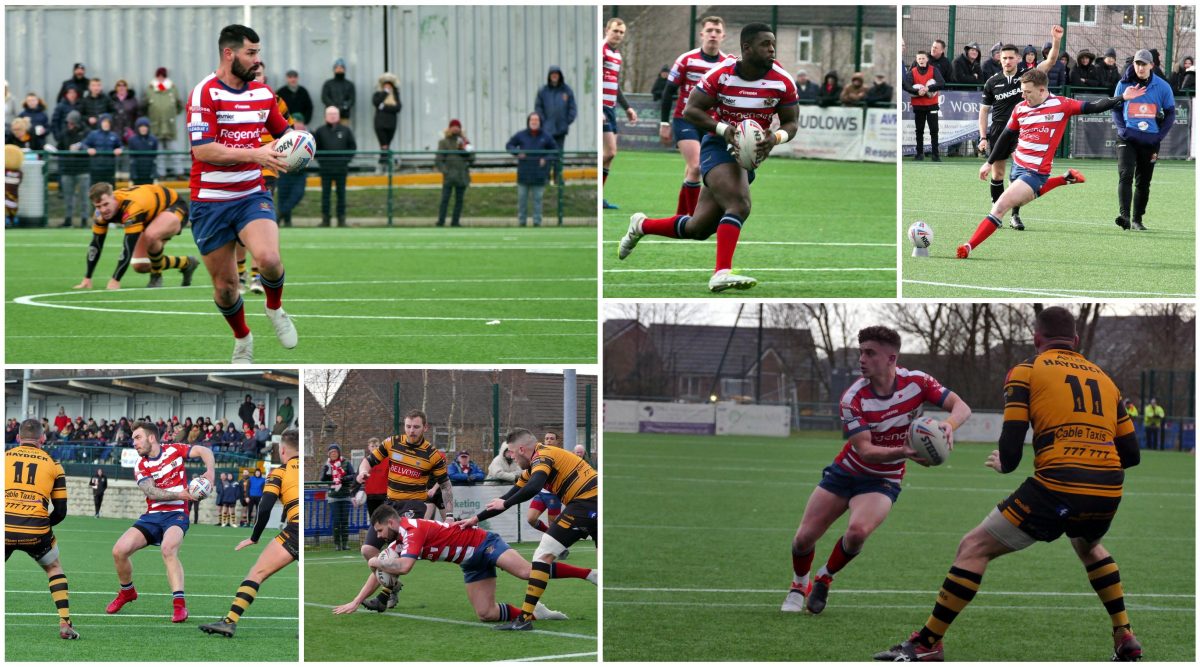 Roughyeds scored seven tries in each half and led 42-0 at the interval.

From a footballing point of view the first try was one of the best, Brook’s cut-out pass to the left finding Holmes in space up the touchline. Maders instinctively moved inside and took the final pass from his centre to touch down — a magical start and one that set the pattern.

Haydock captain and stand-off Jordan Gibson used the wind cleverly at restart kicks to put the home side in a spot of bother. The amateurs regained possession on their own restart a few times, but Oldham’s defence held firm.

Indeed, it never looked like being breached until midway through the second half when Haydock left-winger Karl Dingsdale intercepted a wide ball from Greenwood intended for Aaron Jones-Bishop.

Showing speed and tenacity, he raced out of his own 20-metre zone, escaped Johnson’s clutches, held off the retreating Jones-Bishop and looked to be heading on an inside run the posts until Wilkinson came from nowhere to haul him down short.

It was a terrific piece of cover defending that deserved more than a mere temporary respite. With Roughyeds all over the place in defence, the visitors were awarded a penalty and in the next set prop Scott Johnson got over and Steve Jones added the extras.

Johnson, on Greenwood’s pass, and Wilkinson, using his speed to make the most of a Scott Law break, added further Oldham tries before a Gibson 40/20 with the aid of that powerful wind put Haydock back in sight of the home line.

Gibson then got over for a second Haydock try before Oldham wrapped it all up near the end with McComb’s third after more good approach work by Brook and Johnson.

Johnson won the club’s champagne-moment award, not for any single incident but for his general contribution and attacking prowess in his first outing for several weeks.

Gibson, Lee, brothers Mike and Rob Sexton and subs Carl Cheetham and Kyle Braithwaite worked hard for The Yickers but the gulf in standard was far wider this time than it was two years ago when the sides last met in the Challenge Cup at Bower Fold,