HAYDOCK will have big travelling support at the Vestacare Stadium tomorrow (Sunday) for their third-round Coral Challenge Cup tie against our very own Roughyeds who will show several changes in the line-up.

Up the East Lancs Road near St Helens they still remember that wet, cold day in 2017 when they played us in a fourth-round tie at Bower Fold, Stalybridge and scored two tries by Jordan Gibson and Dean Dollin, who are both in the 20-man squad named early in the week for this second cup clash in three years between these two sides.

Roughyeds regained their composure to win 40-12 in front of a crowd of 743 — one of the best of the year and including a good following from Haydock.

Two years on, the amateurs are expecting to bring three bus loads of fans and lots more fans in cars.

They have one or two injury concerns and arranged an extra training session this morning in order to finalise their strongest, and fittest, side.

“We have some great memories from the last time we played Oldham.

“It’s a massive day for any amateur team when you’re in the Challenge Cup and up against a professional club.

“Our spectators will get behind us. Within a week of learning we were to play at Oldham we had filled three buses.

“We are a community club in every sense of the word and the whole of Haydock will be getting behind us.

“Last time we played them it drew one of their biggest crowds of the year which is pretty mind-blowing.

“We’ll have another big following tomorrow and they all know we’ll give it our best shot.

“I’ve watched Oldham a few times. It’s obviously a tough ask for us but the lads will be up for it.

“We are going to Oldham to play and to go for it, like we did last time.”

Dave Naylor, a member of our media team, has a two-page feature on The Yickers, as they are known, in the match-day programme, which will be on sale inside the ground for £3.

We’ve also got a great picture of Haydock fans with their banners at Bower Fold as part of a feature by George Cowburn on all our cup-ties against amateur opposition going back 120 years.

Scott and the boys wrapped up their preparations at the Captain’s Run this morning, after which the following 19-man squad was announced.

It is the first time 19-year-old winger Maders has been in the provisional squad since the pre-season friendlies when he did very well indeed, having just signed from local amateurs Waterhead although he has been in the academies at both Salford and Huddersfield. 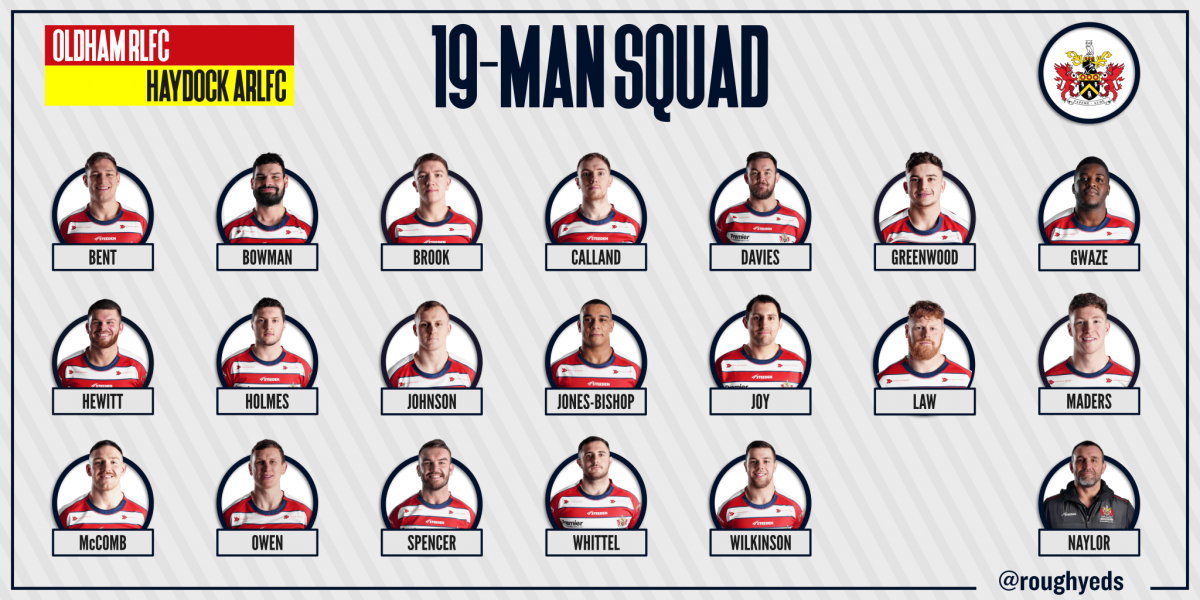 A reminder that St Anne’s under-11s and Rylands from Warrington will play a curtain-raiser which fans can watch by using the “tickets” turnstile from 1pm.

Haydock’s junior section will also be well represented and both teams will leave the tunnel escorted by individual mascots, all part of a “massive” occasion for the community club which pulled off great wins against Yorkshire opponents Shaw Cross and Normanton in earlier rounds.

Roughyeds are urging fans to turn out in force to show their allegiance to the club at a time when all clubs outside of Super League need to show the RFL that they are up for the fight in the challenges that lie ahead.

Admission prices tomorrow have been slashed to £10 for adults and £8 for concessions, down from £14 and £12 respectively. It’s £2 for under-16s and our junior season-ticket holders go FREE on production of their books at the turnstiles.