​BUOYED by an attendance of more than 700, the best for this fixture since 2010, Oldham ran in six tries and moved up to second place in Betfred League 1 with a 34-4 win against a big, strong London Skolars side at the Vestacare Stadium.

By respecting possession, defending well, watching their ‘ps and qs’ in key areas like tackle and ruck and taking most of their chances — not all — the home side kept on top of a potentially dangerous Skolars outfit to win comfortably in the end.

Scott Naylor’s men conceded only three penalties in the entire game; a key feature which contributed significantly to the Londoners’ acute shortage of time and good ball inside Oldham’s 20-metre zone.

In the main, Roughyeds took ownership of the two ‘red zones’ at either end of the pitch and thus restricted the men from the South to an absolute minimum of serious pressure and only one try by left-wing Joe Brown, following a James Meadows kick to the corner, midway through the second half.

Other than that, they rarely threatened with any serious potency which was more down to Oldham’s resolve and resilience in defence than to their own shortcomings.

In stark contrast Roughyeds ran in six tries; two in the first half by Phil Joy and Zack McComb and four after half-time by Joy again, Jack Spencer, Kyran Johnson and Lee Kershaw.

They were largely the product of first-class ball handling, keen support play and strong finishing, especially so the three scored wide out by centre McComb and wingers Johnson and Kershaw.

Having said that, there was no better example of razor-sharp backing up than that displayed by a jubilant Joy, who tracked a fast-moving Matty Wilkinson on his inside to take the hooker’s defence-splitting final pass and gallop home like a prize bull on a charge; all 6ft 3in and 110 kilos of him going flat out unopposed with so much time at the end that he could stop over the line and plant the ball down with two hands. No wonder it won him the champagne-moment award.

“We knew they were a big lot. We had worked all week on stopping them when they had the ball and matching them on go-forward when we had it,”

he said, sporting a cheeky grin that lit up the hospitality suite; could only belong to Phil Joy; and unintentionally revealed how happy he was with his own performance within that of a hard-grafting team.

The man-of-the match award went to lethal left-winger Lee Kershaw, who had done enough to earn the individual accolade before he spectacularly finished off in the corner two minutes from the end to score his side’s sixth and final try.

A fully-deserving recipient had a huge game on attack and defence and earned this from club chairman Chris Hamilton: “Two instances apart, his decision-making on and off the ball was first-class. He did plenty in possession, but it was what he did off the ball that really caught the eye.”

Ritchie Hawkyard and Adam Brook could also claim to be stand-out performers, the latter’s clever use of footwork and slick hands assisting in both Joy tries and the one scored by Johnson, who did well to get over in the corner on the half-back’s wide cut-out pass.

In the decisive battle of the forwards, or to be more precise the props (or ‘middles’ as they often called these days) none did better than two-tryJoy and his fellow starting prop Scott Law, who was making the 250th senior appearance of his career.

He celebrated the milestone with a strong display, gaining the hard yards impressively and leading the Oldham charge on several occasions, not least in the surge of power that put Skolars on the back foot and enabled Brook to capitalise with his money ball to Johnson nine minutes from time.

Credit Skolars with a desire to remain solid as a unit and to never, ever throw in the towel.

In the half hour either side of half-time, when Roughyeds led 12-0, anyone of an Oldham persuasion must have been anxious for their favourites to score next because it was easy to conclude that if Skolars got a sniff they might up their game to make it count.

They were still going for it at 18-0, but when Hewitt landed a penalty after a high shot on Brook to take the home side out to 20-0, it was tempting to conclude that this was game, set and match even though London’s solitary score was still to come. 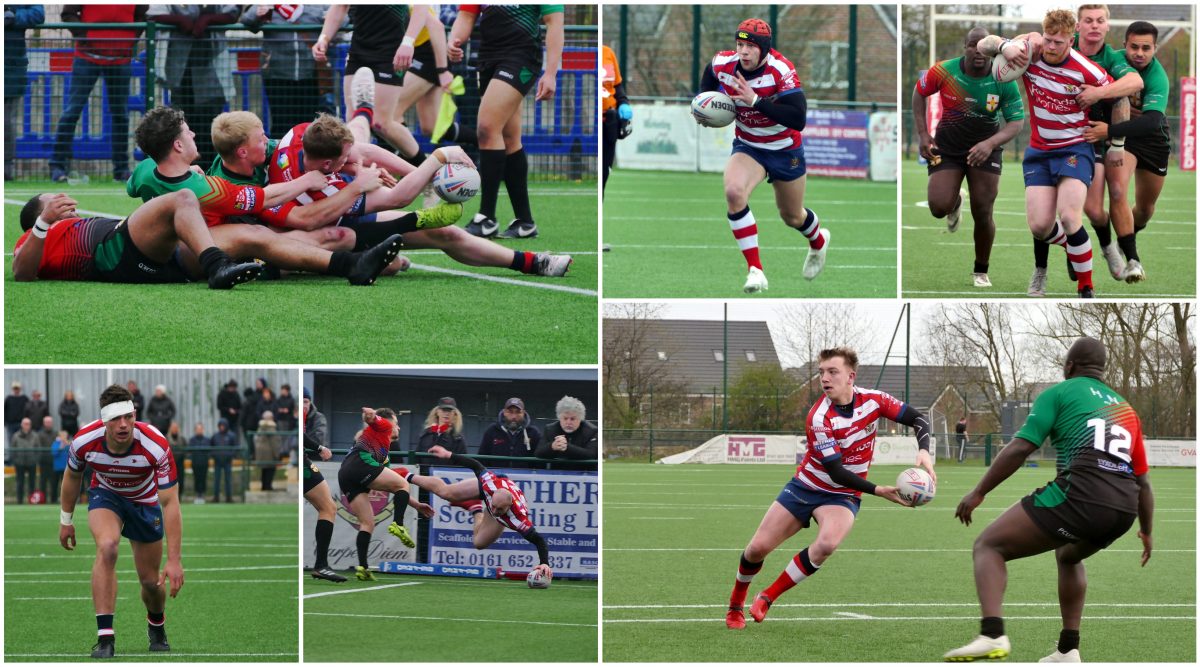 In the event, Roughyeds were to score three tries in the last 13 minutes, Jack Spencer crashing over on Gareth Owen’s flat pass from dummy half and then Johnson and Kershaw squeezing in by their respective corner flags to successfully complete a period of impressive expansive rugby.

Skolars fielded five young players on loan or dual-reg from Wigan Warriors and London Broncos as well as a few vastly-experienced men who have featured at the top level in the past, among them Macani and Caro in the backs, Bishay at hooker and Lamont Bryan in the second-row.

Isaac Atmore-Ah Kuoi, who came on as a sub during the second half, is a nephew of Kiwi star Fred Ak Kuoi, who used to get rave reviews at Hull FC a couple of decades ago.