​DANNY Langtree is back at Oldham on a new contract to November, 2020 or, in playing terms, to the end of NEXT season.

The big news was announced by the club at noon today (Thurs) and fans’ favourite ‘Langers’ will be back training at the Vestacare Stadium tonight in preparation for the Good Friday home clash with Betfred League 1 leaders Hunslet. 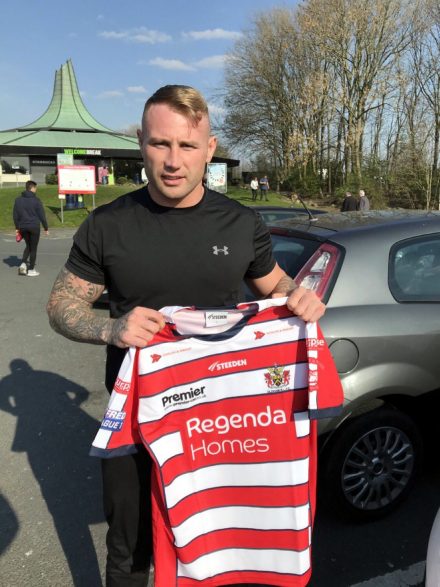 ​He left to join Super League club Hull FC on a two-year contract at the end of last season, but things didn’t work out for him as he had hoped. He got his release and there then followed a rush of clubs to sign him, Oldham fighting off fierce competition to bring him ‘home’ to the Vestacare.

“Danny had a number of clubs contacting him and offering him good money.

“It isn’t easy to bring in a player of Danny’s quality at this time of year, but Chris (club chairman Chris Hamilton) deserve a lot of credit for making the funds available.

“It’s hard to find extra money in the budget so long into the season, but Chris has done it and I’m absolutely delighted. It’s grerat news for the club and fantastic news for the team and the squad.

“It’s all tinged with a little bit of disappointment for Danny that things didn’t work out for him at Hull but you need to be happy at whatever level you’re playing at and I think it’s obvious that Danny has always been happy at Oldham.

“He was hoping to get more of a chance at Hull but it work out like that so he decided to seek his release and come back to Oldham.

“I think it says a lot about the club and the environment that he should be happy to come back to a club where he has already spent quite a few years.

“As I say, Chris deserves huge credit for this. It’s fantastic news for the club and when you consider that Danny Bridge will soon be back from suspension it will be like signing two new players of real quality and experience.

Langtree is really looking forward to turning back the clock tonight and finding himself in a familiar routine — getting in a car in St Helens and driving to Oldham for training. He’s done it once or twice before!

“Firstly, I would like to thank Hull for signing me in the first place and showing such an interest in me. I wish them all the best for the rest of the season.

“It’s hard to explain why things didn’t work out for me there. For one thing, I found it was a big upheaval. At the age of 28 I want and need to be playing every week and I wasn’t getting that at Hull.

“I’m back living and working in St Helens now, working for my dad in his haulage business, and it will be more like ‘me’ to be driving across to Oldham tonight for training.

“A few clubs got in touch but I spoke to Nobby (Scott Naylor) and Chris and there was only one place I really wanted to be and that was Oldham.

“It will be good to be back at the club I first joined all those years ago.”

“We stayed in touch with ‘Langers’ during his time at Hull. Everyone knows how much he enjoyed being here.

“Once he had agreed with Hull that he was going to be released he spoke to us and said he would like to come back.

“It goes without saying that he is a big addition to the squad and we are delighted to have him back.

“We are disappointed it didn’t work out for him at Hull, but he always retained his affinity with Oldham and he can’t wait to get back on board with us.

“Understandably, we have had to fight off fierce competition from other clubs but he is back and he has signed a contract with us to November, 2020, covering the rest of this season and next season.”