Fan of the week, Dave Thomas

THAT legendary Oldham Rugby secretary Bert Summerscales used to say that once the club was in your blood it was a love affair that would last “from the cradle to the grave.”

It might be a slight exaggeration, certainly at the cradle end of the lifetime’s experience, but you get the gist and it’s reinforced when you listen to the Roughyeds story of a fan like Dave Thomas.

Aged 52 and Oldham born and bred, he’s been a red-and-white fanatic since his dad and his elder brother Bill first took him to Watersheddings when he was four or five.

He was immediately fascinated by the Watersheddings stadium, the game, the players, the atmosphere and the camaraderie on the terraces. He’s been a home-and-away fan ever since . . . and more than 20 years after that first visit to Watersheddings that was to shape his life, he bought a house at the top end of Cobden Street, Waterhead purely because it was in close proximity to his beloved ‘Sheddings.

“I was made up to be moving there, but within weeks I was having a pint in the Black Horse on Ripponden Road when Jim Quinn (then club chairman) came in and announced that he had just done a deal to sell the ground. I can remember it as though it were yesterday.

“I was devastated. It was one of the worst moments of my life. I loved that place. I had bought a house just round the corner and then they dropped a bombshell like that.”

Not even that could dampen his enthusiasm for Roughyeds, nor could the shareholders’ vote a year or so later to voluntarily liquidate the club and effectively call it a day because of debts running close to £2m.

To this day, he proudly wears his Roughyeds colours, not only on match days but often when he’s not at work as a repairs manager in social housing and, instead, he’s enjoying leisure time at his home in Moorside.

“Sheddings was a special place”, he added, “but I still enjoy my affiliation with the club and I guess I always will.

“I don’t miss many games and I was thrilled to bits when we learned that Danny Langtree was coming back to us. What a fantastic signing that was.

“I think it was all the more magical because I don’t think anybody saw it coming. It was a real out-of-the-blue signing, great stuff.” 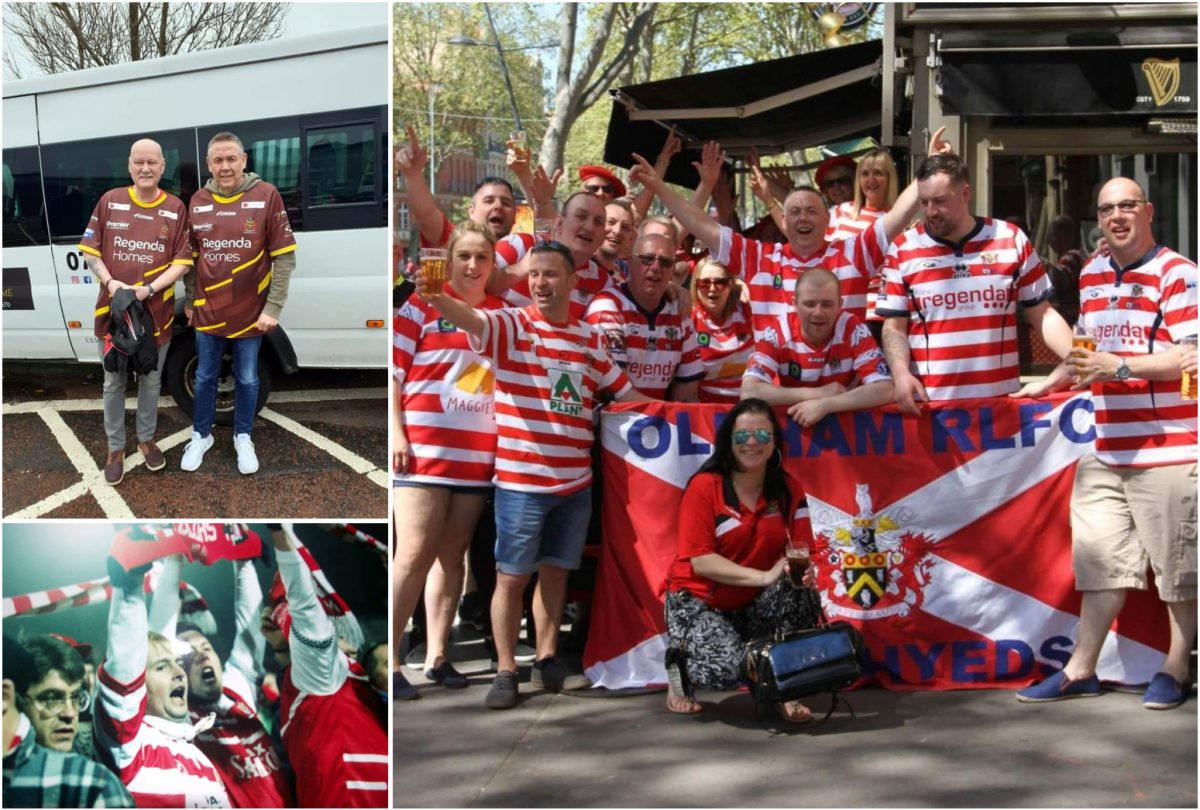 He had no hesitation in naming ‘Langers’ as his No 1 of the current squad, while his all-time favourite Oldham player was Charlie McAlister, the big Kiwi who had it all — strength, speed and sublime handling skills. He could, as they say, make a ball talk.

Married to Mandy, Dave is proud to be a member of a Roughyeds-mad family, to which the club has always meant the world. Julie Smith, grandma of young Keira, of Keira’s Wishes fame, is his sister.

Supporting Keira in the 11-year-old’s amazing and nationally-recognised fund-raising projects for Dr Kershaw’s Hospice, is one of the few things that would come first if it clashed with a Roughyeds game; that and the occasional event that takes he and Mandy to North Yorkshire where they have a caravan near York.

“Oddly enough, I’m going to miss the next two games because we have a caravan ‘do’ over Easter and it’s too far away to get back for the Hunslet game, which I would do normally — and then on the day we play West Wales away I’ve promised to do a sponsored walk with Keira.

“She’s a little gem and she has us doing all sorts of things to raise funds for Keira’s Wishes.”

His favourite food is “anything recommended by Slimming World” . . . or, more seriously, “spicy Indian curries” and he names fishing, golf and caravan-associated events as his hobbies; all after Roughyeds in the family pecking order, of course.

Over the last 47 or 48 years he’s been carried away on a wave of ecstacy or condemned to the depths of despair by events involving a funny-shaped ball that have been totally out of his control.

“That fantastic Challenge Cup win at Hull KR three years ago ranks as one of the best. It’s right up there at the top.

“And going back a lot further, I’ll never forget the day we won at St Helens to stay up, when Bob Lindner had a blinder, or that great night at Sheddings when we knocked an all-conquering Wigan side out of the cup thanks to THE Paddy Kirwan try near the end.

“We’ll talk about matches like that until our dying days, but we’ve also got painful memories too . . . like the semi-final defeats by Warrington and Castleford when we got so agonisingly close to Wembley, and the time we lost in Paris which condemned us to relegation and led directly to us going bump.

“Like you say, though, once it’s in your blood it’s there to stay and as a result of watching Roughyeds playing all over the country, and even abroad, I’ve made some wonderful friends and built-up precious memories.

“The trip to Toulouse a couple of years back was fabulous and over the years I’ve made lots of friends among rival fans, especially the bunch up in Newcastle.

“Watching Oldham Rugby is a massive part of my life — always has been; always will be.”