​SPORT has a nasty habit of spoiling the party and so it was at the Good Friday home game against Hunslet when the visitors scored three converted tries in the last eight minutes to win 36-28; to spoil Easter for a lot of Roughyeds fans; and to be the party-poopers at Danny Langtree’s homecoming.

From start to finish Hunslet crowded out ‘Langers’ like a hawk with its prey — pardon the out-of-date pun — and in that respect they clearly carried out their game plan to the letter.

In presenting the comeback boy with a champagne-moment award post-match, our club chairman Chris Hamilton said:

“There were four defenders on him every time he had the ball. He was under a lot of pressure and a lot of expectation, but we know what Langers is all about and we are absolutely delighted to have him back.”

“It’s good to be back. The result could have been so different and that’s something we’ve got to fix up. We’ll fix it.”

Zack McComb, who had a stormer, took the man-of-the-match award, having scored two second-half tries which should have been enough to see Roughyeds home.

Before the game, in an off-the-cuff chat with Chris Hamilton, he produced the classic throw-away line:

And it looked as though he was going to be true to his word when he twice blitzed the tough and fiercely resolute Hunslet defence to score tries in the 44th and 64th minutes, the latter one pushing us into a 26-18 lead which Dave Hewitt later extended to 28-18 in the 67th minute as both sides were reduced to 11 men on the back of two flares-up and four cards.

Suddenly, there looked to be oceans of space and, it has to be said, Hunslet totally dominated the 11 v 11 contest to administer the killer blow, score three late tries by former Roughyeds Adam Robinson and Ben Heaton (2) and leave the entire Oldham club wondering why on earth we keep getting caught out late on when opponents come from behind to take victory away from us.

In terms of 17 players running with the power of a rhino; tackling with the ferocity of a sledge-hammer wielded by the world’s strongest man; and every man doing both these things every time the opportunity arose on every single play from start to finish of a massively physical encounter, Hunslet could claim to be the most competitive side we’ve seen at the Vestacare so far this season.

Chris (Hamilton) hit the nail on the head when commenting at the post-match presentations:

“In the first half we lacked aggression in defence, but Hunslet certainly had it.”

They did indeed, from start to finish. Nevertheless, having got of to a flying start with two tries in eight minutes — similar to Workington on the opening day of the season — they didn’t cross the line again until midway through the second half, which showed that Oldham must have been doing something right in defence. 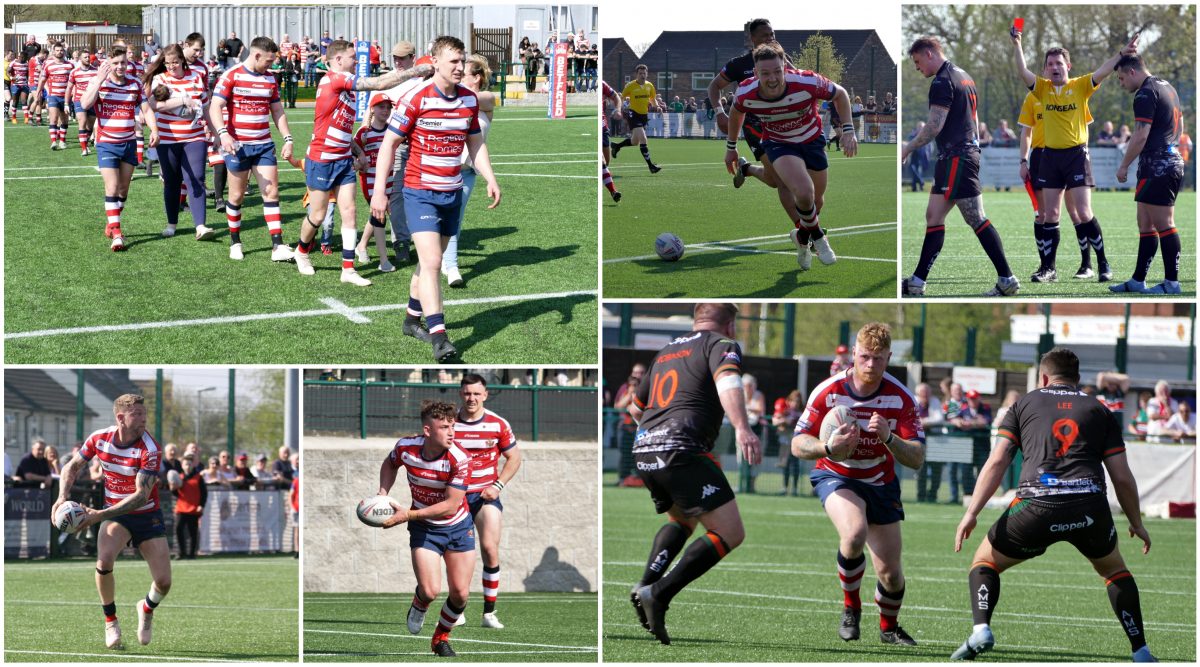 There was a key second-half moment when, already leading 20-14, Kyran Johnson was denied a spectacular try in the corner because of a wide pass that was judged to be forward.

In a nip-and-tuck game both sides lost important possession in turn before Hunslet squeezed over in the corner, the referee consulting his touchjudge before allowing the try, which was converted off the touchline.

At that stage it was a two-point game (20-18) and it was getting more tetchy by the minute, especially after determined Roughyeds defence put Tom Ashton into touch and thus earned possession for the home side at a crucial time of an evenly-fought battle.

It led directly to McComb’s brilliant second try and the Hewitt conversion which gave Roughyeds a 26-18 lead and a bit of metaphoric daylight in the bright sunshine.

Cue the return of Phil Joy off the bench. From tackle one after the restart the ball went loose from Joy and there immediately followed a flare-up which led to Oldham skipper Gareth Owen and Hunslet forward Mike Emmett going in the sin-bin.

Significantly, the penalty went to Oldham, but from the first tackle following the tap young Titus Gwaze copped a high one and there was a second altercation, this time resulting in a red card for Hunslet prop Dan Hawksworth and a yellow for Langtree.

Hunslet were put on a team warning and the penalty again went to Oldham, for whom Hewitt landed the goal which gave the home side a 28-18 lead with 13 minutes left. Surely, Oldham wouldn’t let this one slip. They did.

Agonisingly, they seemed to struggle to come to terms with the absence of Owen and Langtree, while Hunslet appeared to revel in the extra space provided by only 22 players on the pitch.
A Jack Lee break up the middle created the try for the most effective prop on the field, Robinson. Not only did he head-up Hunslet’s fightback from the front, but he led the side admirably and was truly inspirational to his team mates.

The conversion reduced Oldham’s lead to four points, whereupon the visitors again broke up the middle for Heaton to score the first of his late brace, the goal giving his side the lead at 30-28. It was the first time they had their noses in front since the 23rd minute when Roughyeds cancelled out their early 12 point lead with tries by Anthony Bowman and Johnson, both converted by Hewitt.

When chasing the game in the hectic last few minutes, Jack Spencer instinctively threw a speculative pass to his left which ended in Hunslet hands and Emmerson Whittel knocked-on while playing the ball in a strong attacking position — key moments in the story of who won and who lost.

By this time Oldham seemed out on their feet and when Vila Halafihi burst up the middle, Heaton was again on hand to condemn Roughyeds to their second league defeat in a row and their third in total, each after surrendering reasonably-substantial leads in the late stages.

For the impartial observer, it must have been a gripping contest to watch and, for the competitive element if no other, a terrific advert for the dogfight that is clearly going to make headlines at the top end of Betfrd League 1 over the remainder of the season.

Oldham are down to fifth; Skolars are up to third; the top seven are split by only four points; and Workington, no less, aren’t even in the current play-off places.

Could it be any tighter ?