Jones-Bishop, Bowman back in 19-man squad

Lee Kershaw also returns and there’s an immediate call-up to the 19 for new-boy Frazer Morris, the young prop who has joined us on loan for a month from Halifax.

Out of the provisional 19 named for last week’s cup-tie go the injured quartet of Ritchie Hawkyard, Harry Maders, Ben Davies and Danny Grimshaw. 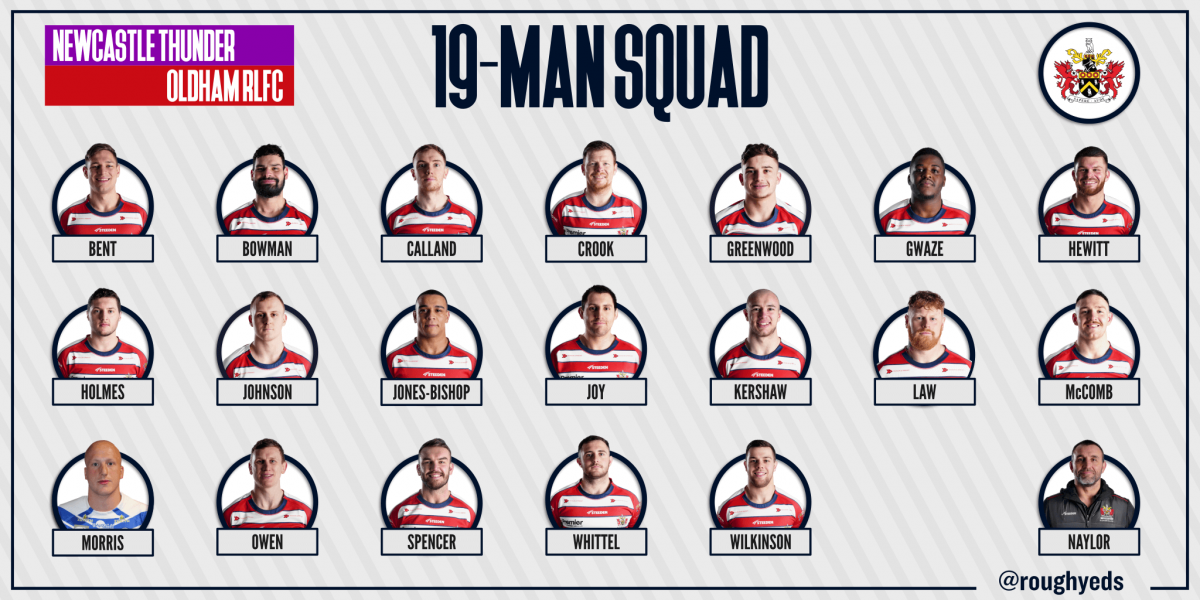 Thunder’s new boss Simon Finnigan has named his first 19 and there is no place for centre or wing Misi Taulapapa, who played on the wing in last Sunday’s one-point defeat at Workington in the Coral Challenge Cup, or for French international half-back Remy Marginet.

The likeihood is that both players are out through injury, but that’s speculation; there is no official reason given.

Cory Aston, son of the Sheffield Eagles boss Mark Aston, didn’t play at Workington last week but it looks as though he could come in at half-back to partner Jy-mel Coleman.

Turnstiles at Kingston Park open at noon, ahead of an under-19s match between Thunder and Leeds Rhinos which kicks off at 12.30pm.

This is all part of Newcastle’s celebrations to mark the 20 years since Gateshead Thunder (same club, different name) made their Super League debut against Leeds.

These celebrations, coinciding with Finnigan’s first game in charge, will make for a party atmosphere and provide an ideal opportunity for Roughyeds to become party-poopers.

Figures released by the RFL show that the aggregate attendances for the fourth round of the Coral Challenge Cup were up by 18 per cent on last year’s equivalent — 9,531 against 8,079.

There was a special mention in the communique from HQ for Keighley Cougars (1,881) and for Oldham (1,247), whose figures were up by 112 per cent and 89 per cent respectively, compared with average league match attendances, due to visits by Championship teams.

The Bower Fold attendance was around 350 up on the next highest, Barrow v York (898) and Whitehaven v Rochdale (889).

Three attendances were not given in Monday’s trade papers, but the RFL has now given them as follows: Featherstone Lions v Doncaster (404), Featherstone Rovers v Swinton Lions (691) and Workington Town v Newcastle Thunder (590).

The RFL is one of the first sports in the UK to partner the streaming platform Twitch, which has 15-million active users daily, of which 55 per cent are aged 18 to 34 — an opportunity to expose rugby league to a new audience.

| Five regulars who didn’t play against Coventry are included in Scott Naylor’s 19 for the “massive” game at Hunslet tomorrow (Sun), 3pm).
Our Partners