DAVID Murgatroyd, one of the enthusiasts who is fronting Roary’s Pride, submitted his thoughts on the new group’s first meeting.

“When I said I wanted to start a junior members’ club, I vowed to make the meetings as exciting for the children as I possibly could.

“I’m happy to report that the first meeting, held in the Vestacare Stadium social club last Saturday, May 18, was exactly that and much, much more.

“Sophie Nixon, Roary (the loveable lion himself) and I hosted the inaugural get-together which was attended by about 18 children with their parents or guardians.

“The young members displayed their artistic skills by colouring in pictures of Roary and then they and their parents were joined by three Oldham- born players, club captain Gareth Owen, forward Danny Bridge and young winger Harry Maders, who popped in after they had finished Saturday morning training.

“Lots of photographs were taken and many autographs signed before the players talked to the children about their early days in rugby, all three of them starting off at Waterhead.

“The players then took part in a new competition, which will run for every Roary’s Pride meeting and will be open to all the different players who will come to future meetings. At the end of the year there will be a prize for the overall winner.

“You know the game, I’m sure. I asked each player a series of questions, the objective being to avoid, in reply, the words ‘yes’, ‘no’ or ‘don’t know’ for as long as they could.

“Gareth Owen (33 seconds) is in the lead from Harry Maders (23 secs) but we’ll not say anything about Danny Bridge’s three seconds! He fell for it hook, line and sinker.

“We were then joined by Blue Watch from Hollins Fire Station. Lee, the Watch commander, gave us a safety talk about the dangers of fires and gave us expert advice about what to do if a fire was to happen at home.

“One of the proud ‘Pride’ mums was then asked to step forward to dress up in a firefighter’s uniform.

“Blue Watch showed our members around a fire engine and told us what all the equipment was used for.

“But the best was kept for last when the fire crew unrolled one of the hoses and let the children and Roary spray water over the car park. The children had a great time and so did their parents.

“I was thrilled to bits with how the meeting went so a massive thanks to Sophie, without whose help I would be struggling; to Lee and Blue Watch, who were absolutely fantastic; to the three players; to Linda from our sponsors; to Roary; and to the parents for bringing their children along.

“A date for the next meeting will be announced soon. We will have new pictures to be coloured in, three different players to chat to, and we will talk to another one of the emergency services.

“The whole idea of Roary’s Pride was to give children a little bit of knowledge and plenty of fun and also to give them pride in themselves, their family, their town and their favourite rugby league club. Who else but Roary’s Roughyeds!

“Even after one meeting I can confidently say it’s working!” 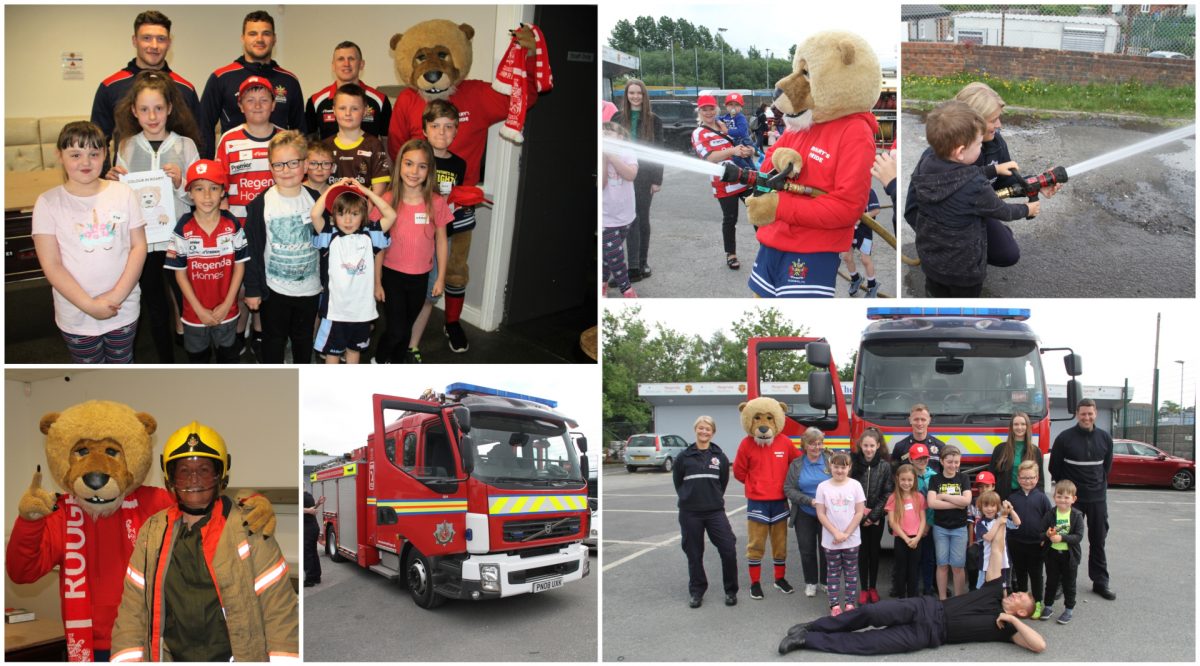 “The first Roary’s Pride meeting was a great success. The children had an opportunity to meet and chat with players, get autographs and take selfies. They also enjoyed meeting local firefighters and having a look around a fire engine. Thanks to Roary and Dave for organising it. We ca’nt wait for the next one!”

“A great first Roary’s Pride meeting. Evie absolutely loved it. Hollins Fire and Rescue team was amazing, giving us a fun and informative tour around the fire engine. A big thanks to Dave, Sophie, Roary and the players who took time out of their day to take part and speak to the kids. Everyone involved should be proud of how it went”