​OLDHAM strengthened their position in the top three of Betfred League 1 with another impressive performance in a 52-12 win at Keighley Cougars.

It was their fourth win a row — 72-8 at West Wales Raiders, 48-12 at home to league leaders Whitehaven in the new 1895 Cup, 34-18 at home to Coventry Bears and now this one, amazingly their first win at Cougar Park in eight visits.

This old rugby league ground in Bronte Country, which has held so many demons for Roughyeds in the last few years, was this time lit up by Scott Naylor’s men, whose nine tries took their total of touchdowns in their last four outings to an astonishing 37.

This time they were scored by Emmerson Whittel (2), Liam Bent, Gareth Owen, Paul Crook, Danny Langtree, David Hewitt, Zack McComb and Jack Holmes with stand-off Crook also kicking eight goals from ten shots to finish with 20 points on his own.

Sub-forward Whittell showed up well against his former team mates. his brace of tries in the last few minutes adding the icing on the cake for Roughyeds.

From their very first set, when they battled their way up the slope from their own 20-metre zone to the Cougars’ red zone, Roughyeds totally dominated the proceedings.

In set two, they forced an error by James Feather and that led directly to Bent’s opening try after a pin-point chip into the in-goal by Gaz Owen.

A surprise first-tackle 40-20 by Keighley gave the home side the briefest of stays near the visitors’ line and when centre Macauley Hallett crossed it was on a forward pass.

Playing a brand of quality rugby which was always looking to expose Cougars out wide. Roughyeds fluffed a clear-cut chance before Owen again made his mark with a try out of dummy-half after a solid drive by Bent. 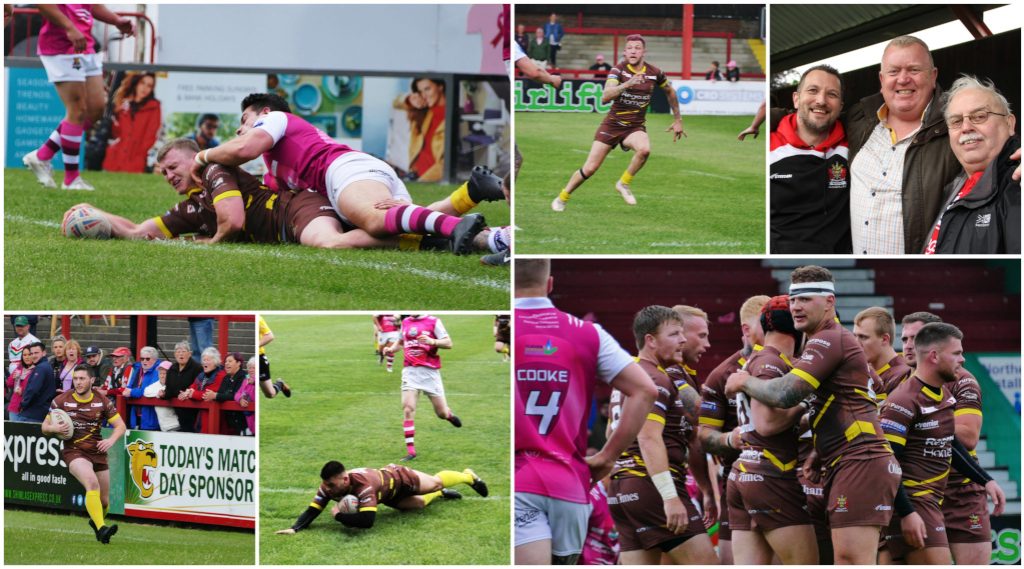 Crook went close after more good work by Hewitt and Johnson before the home side forced a rare error out of Ritchie Hawkyard; won a penalty for offside; and capitalised with their opening try when debut-making new boy Louis Sheriffe crossed under the posts.

The game’s first five penalties went to Cougars but Roughyeds then got two on the bounce for dissent and normal business was quickly resumed.

The visitors missed a second clear-cut chance down the left before Johnson’s nimble inside break set up a try for Crook, which he also goaled for an 18-6 interval lead.

Oldham, looking well on top now, got the second half off to a flyer with a Crook penalty goal and a solo try by Danny Langtree after a one-on-one steal.

Matty Wilkinson was now terrorising Cougars from dummy-half as captain Owen had done earlier — different style, similar results —- and it was Wilky’s short pass to Danny Bridge on the burst that saw the big man break clear and send in Dave Hewitt behind the posts for the fifth try.

A fantastic piece of handling by Whittel, despite a well-timed tackle that smashed him, produced another good try by McComb in the corner.

Johnson was hurt when rising high to challenge for the restart kick and it was later announced that h had gone to hospital with a suspected fractured jaw.

A rare Cougars attack produced a try and a goal for Jack Miller (12-36) before Roughyeds finished with a flourish.

Holmes scored in the corner when gathering in a Hewitt cross-kick to the left before the energetic Whittel scored twice late on over on the right after a couple of teasing kicks by Crook tested the home defence and found it to be wanting.

Keighley’s reverse fixture at The Vestacare Stadium is only three weeks away (June 16) and before then Roughyeds have two clashes with Doncaster, the first of which is next Sunday, June 2 at The Vestacare in the second round of the new 1895 Cup (3pm kick-off).