A few places still left on our Wembley trip

FANS who fancy coming with us on our club trip to Wembley on Saturday, August 24 need to book as soon as possible because there are only a few seats left and it really is a not-to-be-missed, value-for-money Roughyeds day out.

For £65 you get executive coach travel, a Club Wembley seat, participation in the grand Wembley parade around one of the best and most famous sporting stadiums in the world, fun, banter and laughter on the coach with fellow Roughyeds supporters, a completely stress-free day (no worries about driving, cost of car parking etc) and TWO cup finals, the Coral Challenge Cup final at 3pm and the 1895 Cup final at 5.30pm. 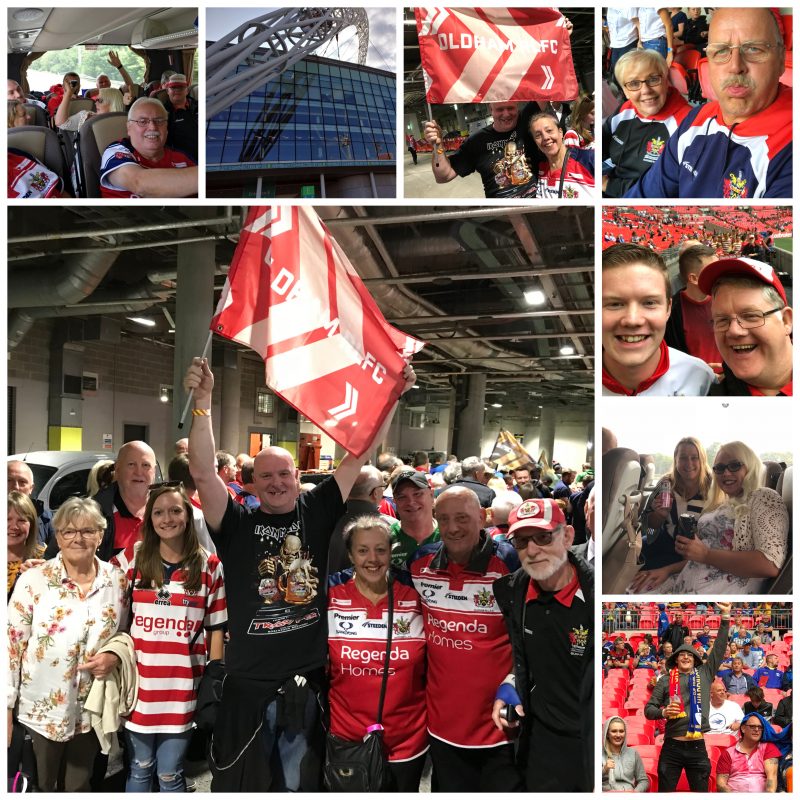 On last year’s trip, which was voted a big hit by those who went on it, we had a draw to see who would carry the Oldham flag on the Wembley Parade and it was won by lifelong fan John Illing.
Roger Halstead, who was on the trip, wrote this in the ‘Roughyed Review’ of September 2 last year:

“The 2018 Ladbrokes Challenge Cup final at Wembley will go down in history for French club Catalans Dragons famous victory over Warrington Wolves and the award of the Lance Todd Trophy as man of the match to Dragons full-back Tony Gigot, the first Frenchman to lift that iconic piece of silverware.

“For everyone associated with the Oldham club, though,it was the day Roughyeds went to Wembley with 45 supporters taking part in the pre-match parade of the stadium, led by lifelong fan John Illing, who had the honour of carrying the club’s flag.

” ‘When I was asked to do it I was a little bit embarrassed at first but once I had got used to the idea I was as proud as punch,’ said John (51), whose brother Peter made it a great day for the Illings by winning a club raffle on the way down to London.

“Murgy gave us a song with croaky backing from Roger H and it was interesting to learn that roughly half of us fancied the French to win with the other half going for the Wolves.

“Youngest fans on the trip were 11 year-olds Joe and Travis. What memories for them !

“On the journey south and the return trip north we had a plentiful supply of tea, coffee and hot chocolate served up by Anne and Nigel and everyone agreed a good time was had by all.

” ‘We’re looking forward to next year already,’ was the message coming through loud and clear from the rear end of the bus.

Well, Anne and Co did take note with the result that we’re going again on August 24.

You can book online with credit or debit card or drop into the office (07904 898177) between 10am and 3pm on Mondays, Wednesdays and Fridays, paying by cash or cheque only.

Hurry because tickets are selling fast and we’ll soon be booked up.