ANOTHER player of the week is the St Helens lad, David ‘Chewy’ Hewitt, who talked to JENNY McGRANE, a member of our media team, after training on Saturday.

He played both rugby and football until he was 11 but our scrum-half and play-maker then had to make a choice. He opted for rugby league and continued his rugby development at the St Helens academy.

He first played for Oldham in 2015 on loan. His career then took him on a full-time contract to Sheffield in 2016 but he then returned to Oldham on a permanent basis in 2017 and he’s loving his rugby with the Roughyeds at the Vestacare Stadium. 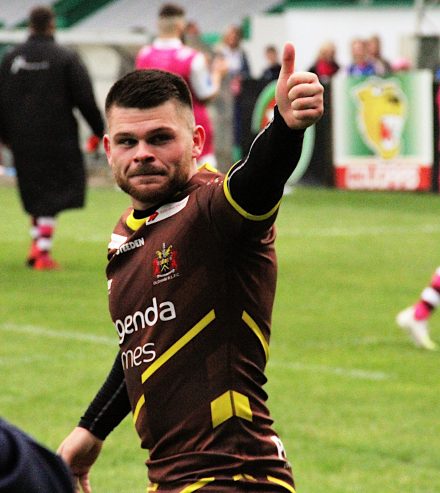 ‘Chewy,’ a staunch Manchester United fan, enjoys watching football when he isn’t playing rugby. He watched the Champions League Final on Saturday night, but as a United fan he didn’t want Liverpool to win. He was cheering for Spurs, so let’s hope that was the first and last sporting event of the weekend that ended in disappointment for our Roughyeds’ half-back.

Back to the rugby world and his heroes are former St Helens full back Paul Wellens and Australian full back Darren Lockyer.

His favourite opponent is Featherstone and former Sheffield scrum half Dane Chisholm.

In his view his best game for Oldham was in August, 2016 against Swinton. Oldham won 30-8 and Dave scored two tries as Roughyeds clinched their Championship status for another year.

‘Chewy’ doesn’t talk easily about himself but, when pressed, he described himself like this: “Boring, quiet, slow dancing. Would love to be Mr Funny, but more than likely would be Mr Boring.”

What he doesn’t tell you is that he is our top points scorer so far this season with 74 from four tries and 29 goals and he is second to Keighley’s Benn Hardcastle in the Betfred League 1 scoring charts.

He would have been miles in front in both lists had Paul Crook not removed him of goalkicking duties several weeks ago. How fortunate we are to have two goalkickers of their quality.

A friend on a desert island would have to be Danny Langtree, a good friend, a fellow St Helens lad and a mate with whom ‘Chewy’ can have a good drink — and often does.

His thoughts on the start of the season are similar to those of Ritchie Hawkyard — a slow start which is now gaining pace as the squad goes from strength to strength and is improving each week.

says ‘Chewy’, who believes we will finish top of Betfred League One, gain automatic promotion and play Championship rugby again next year.