MIKE and Viv Travis have been hooked on Oldham Rugby for years — and it’s a family affair to this day, writes JENNY McGRANE, a member of our media team, who should know what she’s talking about. She’s their daughter!

In 1966 Mike watched his first game, aged 11, with his late father, Norman, who was a season-ticket holder at Watersheddings.

Even though it was more than 50 years ago, Mike clearly remembers watching the players leaving the pavilion and walking down the back of the stand and out on to the pitch.

Over the next few years, he enjoyed supporting Oldham Rugby so much that he was keen to introduce his new girlfriend Viv to the game, which he did in 1974.

Mike continued to watch and support Oldham for the next 23 years until the club went into liquidation. There was no one happier when Oldham RLFC (1997) Ltd was formed a few weeks later.

He continued his loyal support throughout the nomadic years until 2010 when he joined many other fans in helping to get Whitebank ready for the club’s first season there by painting the metal work around the ground.

Viv, now Mrs Travis, came back to the game five years ago and hasn’t looked back since. She is now as keen as ever and rarely misses a game, home or away. 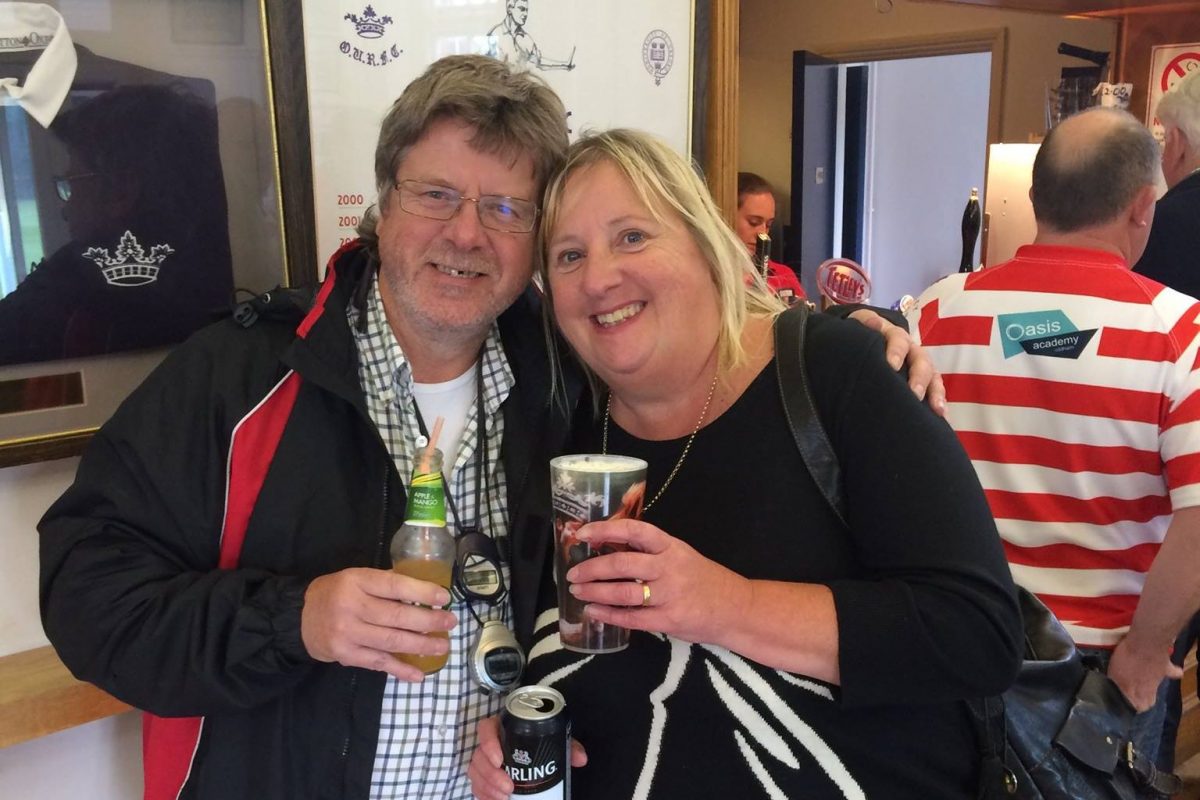 Mike’s favourite player of all time was that courageous little full-back of the 60s, 70s and 80s, Martin Murphy, and his current favourite is Liam Bent, whom he admires because of his determination to keep pushing for the full 80 minutes.

Viv’s favourite past player is former captain and stand-off Lewis Palfrey while, of the present squad, she most admires forward Jack Spencer.

Mike would love to have seen Peter Smethurst play with our current squad while, on a similar theme, Viv would have been happy to see Kevin Sinfield back in his home town and working to push and develop rugby league on his own doorstep.

They both feel the Oldham team is improving after a slow start and needs to avoid lapses in concentration that sometimes marred its performances early in the season.

They also believe we’ll win promotion to the Championship, hopefully by finishing top and going up automatically, but they acknowledge that “we always seem to do things the hard way.”

They enjoy the family, friendly atmosphere on match days and are proud that both their children and their youngest grandson are following the family tradition in supporting the Roughyeds.

“We hear a lot about the rugby league family and I can vouch for the fact that it’s very much alive within the Oldham club.

“Everyone is made welcome, whether or not he or she understands the game.”

Mike enjoys his role as the club’s time keeper even when it is so cold at the ground that his stopwatch face ices over.

He should have tried time-keeping at a floodlit evening match at Watersheddings in the middle of a severe winter. Now that’s what you call cold!

AS you all know from your own experiences these are tough times for everybody, but we believe you will agree that OLDHAM RLFC is taking massive inspiration from the fabulous NHS and other key workers in tackling Covid head-on, while looking forward positively to the 2021 season and better times ahead thanks to the outstanding work now being done to get people vaccinated as quickly as possible.

Nevertheless, we have to face facts and be realistic enough to accept that the club urgently needs every pound that is currently coming in from whatever source. One of those sources is our Club Cash lottery and we would like to take this opportunity to thank all those who support us on this. A lot of you who used to pay our collectors on the doorstep have responded to our suggestions on how to pay by different methods and we are extremely grateful for that. Thanks again. You will never know how much difference your contributions make.

Alas, our income from the lottery has dropped by more than 50 per cent over the course of the pandemic and that would be a huge blow financially at any time let alone a time of unprecedented hardship because of the pandemic. It really is a situation we seriously need to address.

With that in mind the prize fund for the duration of the latest national lockdown will be temporarily reduced from February 10.

You will still be able to win a £1,000 first prize, plus £100, £50, £25 and ten £10 prizes every week, while continuing to provide vital support for the club and it will only cost you £1 a week. You can’t get a decent coffee for that, but the difference it makes to the club when multiplied a few times over and then multiplied again by 52 – the number of weeks in the financial year – is of major significance.

If you can help us at all — for £1 a week — it would be hugely appreciated by everyone with Oldham RL Club at heart. The prize structure still represents good value for money for an outlay of £1.

To those who are already members and help us accordingly, we very much hope to retain your support at this extremely difficult time.

Should you wish to play but don’t, due to the pausing of cash collection rounds, we have other options available, which you can discuss with our lottery administrator, John McAndrew on 07980129541 or from the club on 07904 898177.

Alternatively, you can send an email to: mcandrewj@aol.com or to: enquiries@roughyeds.co.uk

The prize fund will be increased back to previous levels as soon as latest lockdowns are released. Please watch our website and social media platforms for further announcements.

Finally, if you want more information about the lottery or you wish to discuss your membership please contact one of the numbers given above.

A huge thank-you to you all.

Chewing it over with Jenny . . . !
Scott playing it cool on big-game selection