Gregson, Greenwood back in squad

They replace the injured Jack Spencer and Ritchie Hawkyard.

It will be interesting to see who gets the full-back role in the absence through injury of both Hawkyard and Kyran Johnson, but it will probably go one of the three half-backs in the 19 — Dave Hewitt, Adam Brook or Paul Crook — or to the versatile Jack Holmes, who has considerable experience of the centre, wing or full-back spots.

All eyes will be on new centre signing Cameron Leeming, who will be playing at the Vestacare Stadium for the first time, having played impressively at left-centre in his Oldham debut at Workington last week.

The 23-year-old former Hunslet, Keighley and Dewsbury centre has signed to the end of the season, during which time he hopes to do enough to earn a new deal for 2020.
Gregson played for the first time in the home win against Keighley Cougars, but he picked up a head injury which kept him out of the squad that travelled to Workington and recorded a 26-16 win last week.

It means that, with Leeming and Gregson in the spotlight, Roughyeds will be seeking their sixth win in their last seven Betfred League 1 outings.
The run started with a 72-8 win at West Wales at the end of April and produced further wins against Coventry at home (34-18), Keighley away (52-12), Keighley at home (28-4) and Workington away (26-16) against one defeat at Doncaster (0-31).

Only Hunslet, who don’t play this weekend, have a better for-and-against record than Roughyeds, who are certain to move up to the top two if they beat the Raiders tomorrow. 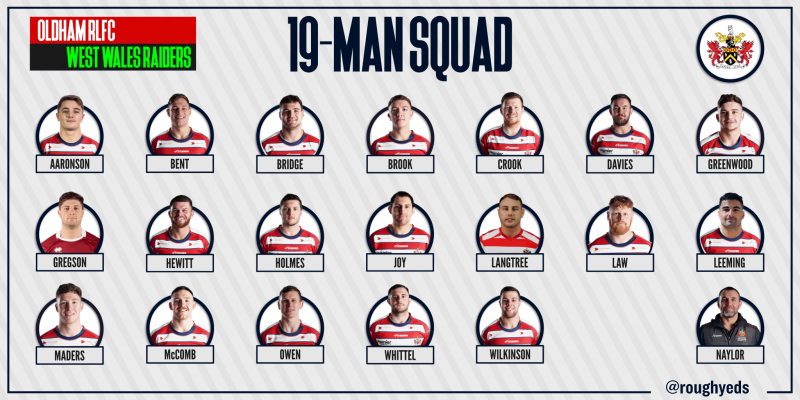 A reminder that under-16s go free to this match and those adults who have half-price vouchers must remember to have them and present them at the turnstiles.

Spencer, Hawkyard out through injury
Aiming for second spot — and a thriller at the Recre