ZACK McComb is quickly becoming a fans’ favourite at the Vestacare Stadium.

After enjoying successful trials in pre-season friendlies, Zack signed for Oldham at the start of the 2018 season, writes JENNY McGRANE.

His love of rugby league began when, as a small boy, he watched his dad play — and he has been playing the game himself since he was seven years old.

In his teens, Zack spent five years with Huddersfield Giants before signing for a season with Batley, who then had a dual-registration partnership with Oxford,

He had spells at Oxford on dual-reg and at Gloucester on loan before returning to his amateur club Siddal in his home town of Halifax.

He and two of his Siddal mates then joined Oldham for pre-season training ahead of the 2018 season and it was on the back of his impressive pre-season and then his performances while on trial in the pre-season games that Roughyeds gave him a second chance at part-time pro level.

Having grasped it with both hands and now in his second season here and doing very nicely thank-you, Zack describes Oldham as a good club with quality lads.
At the time of writing he’s the team’s top try scorer this season with 13 — five more than his nearest challenger, full-back Ritchie Hawkyard. 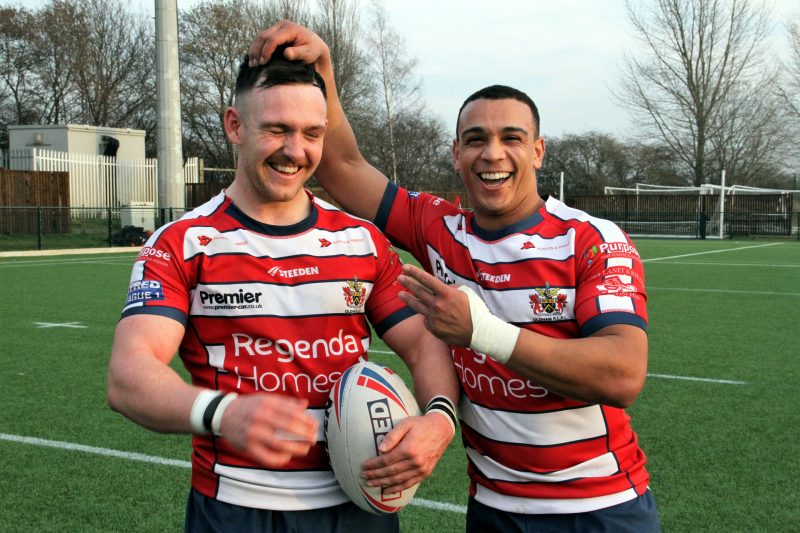 With a wry smile, Zack describes himself thus: “The best-looking guy in the squad and the funniest by a mile — an all-round top bloke.

His rugby hero is former Wigan and Great Britain captain Andy Farrell, while the best player he has ever played against is former Bradford and Wigan centre or second-row John Bateman with ‘Titch’ (Ritchie Hawkyard) a close second.

Away from rugby his hero is the hugely influential Queen singer, Freddie Mercury.

Zack’s only hobby, if you can call it that, is to be ‘a self-proclaimed model’.

With him on a desert island he’d want ‘Titch’ for his DJ skills; Jamie Greenwood because ‘he’s just an idiot‘; and maybe ‘Nealy’ (club conditioner Adam Neal) because he’s ‘interesting sometimes‘.

He wouldn’t take Phil Joy. Why ? “Because he can’t swim or climb trees.”

Asked for his thoughts on the season so far and his predictions for the second half of the 2019 campaign, he said (speaking more seriously than previously): “We’ve had ups and downs, but we all know we’ll be the best team in the league once we put everything together.

“Hopefully we can kick on after the setback at Doncaster and finish top of the pile. That’s our goal and we’re going for it.”

AS you all know from your own experiences these are tough times for everybody, but we believe you will agree that OLDHAM RLFC is taking massive inspiration from the fabulous NHS and other key workers in tackling Covid head-on, while looking forward positively to the 2021 season and better times ahead thanks to the outstanding work now being done to get people vaccinated as quickly as possible.

Nevertheless, we have to face facts and be realistic enough to accept that the club urgently needs every pound that is currently coming in from whatever source. One of those sources is our Club Cash lottery and we would like to take this opportunity to thank all those who support us on this. A lot of you who used to pay our collectors on the doorstep have responded to our suggestions on how to pay by different methods and we are extremely grateful for that. Thanks again. You will never know how much difference your contributions make.

Alas, our income from the lottery has dropped by more than 50 per cent over the course of the pandemic and that would be a huge blow financially at any time let alone a time of unprecedented hardship because of the pandemic. It really is a situation we seriously need to address.

With that in mind the prize fund for the duration of the latest national lockdown will be temporarily reduced from February 10.

You will still be able to win a £1,000 first prize, plus £100, £50, £25 and ten £10 prizes every week, while continuing to provide vital support for the club and it will only cost you £1 a week. You can’t get a decent coffee for that, but the difference it makes to the club when multiplied a few times over and then multiplied again by 52 – the number of weeks in the financial year – is of major significance.

If you can help us at all — for £1 a week — it would be hugely appreciated by everyone with Oldham RL Club at heart. The prize structure still represents good value for money for an outlay of £1.

To those who are already members and help us accordingly, we very much hope to retain your support at this extremely difficult time.

Should you wish to play but don’t, due to the pausing of cash collection rounds, we have other options available, which you can discuss with our lottery administrator, John McAndrew on 07980129541 or from the club on 07904 898177.

Alternatively, you can send an email to: mcandrewj@aol.com or to: enquiries@roughyeds.co.uk

The prize fund will be increased back to previous levels as soon as latest lockdowns are released. Please watch our website and social media platforms for further announcements.

Finally, if you want more information about the lottery or you wish to discuss your membership please contact one of the numbers given above.

A huge thank-you to you all.