FIVE regular members of the Oldham side who didn’t play last week against Doncaster in the 1895 Cup are included in the 19 for the important Betfred League 1 clash with the same opponents at the Keepmoat Stadium tomorrow (Sunday), kick-off 5.30pm.

The game, which will be streamed live on the Our League app, is starting late because the stadium will be used for the completion of a 10K run in the afternoon.

Fans who can’t make the trip can watch it on Our League and those who haven’t yet signed up for this rugby league-dedicated app, which is free to join, can do Roughyeds a big favour by so doing and making sure you provide the information that Oldham is the club you support.

Zack McComb and Dave Hewitt were in last week’s provisional 19, but neither of them played.

They, plus Danny Bridge, Danny Langtree and Emmerson Whittel, are all included in the 19 for tomorrow to the exclusion of Paul Crook, Ben Calland and Jamie Greenwood. 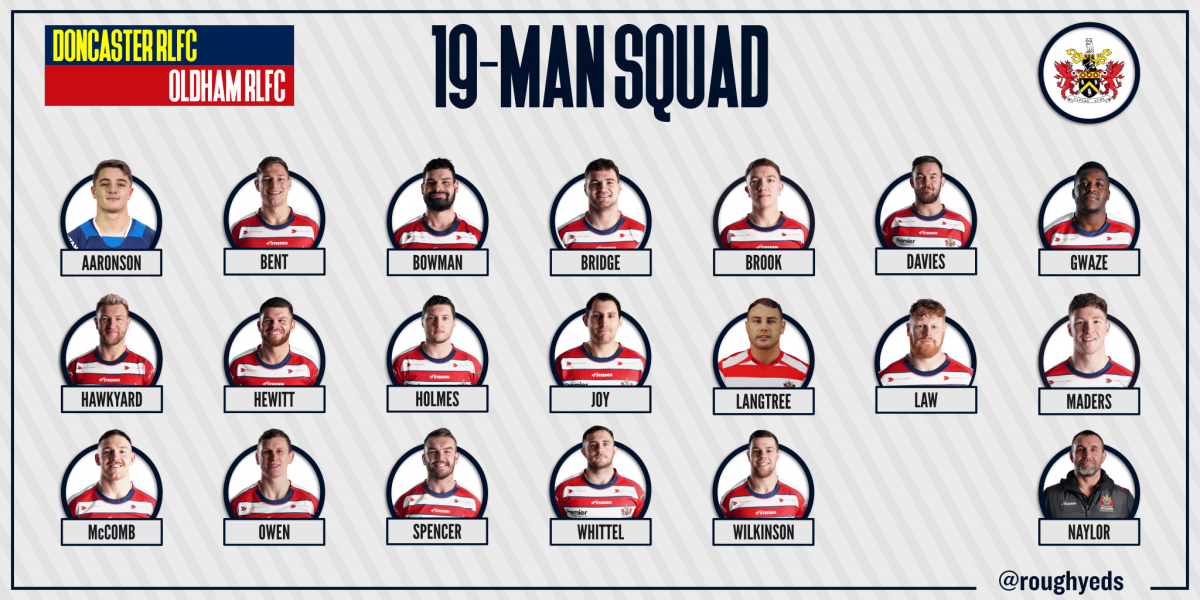 Doncaster will be without dual-reg forward Levy Nzoungou, who is starting a two-match ban, but instead they will have another Hull FC player, Joe Brown, available.

They also have in the squad two players who were carrying knocks and didn’t play last week, namely top try scorer Connor Bower and Connor Scott.

Quoted in the Doncaster Free Press, The Dons’ assistant coach Pete Green summed up the game like this:

“Last week’s win will give us confidence. We showed we can open them up and if we had taken our chances we would have put more points on the board.

“Oldham will be a lot stronger though. They’ll have both second-rowers , Danny Bridge and Danny Langtree available again and they’ll make a big difference.

“They help to lay the foundations for a lot of what Oldham do in attack and they are both very direct with the ball.

“We know how good Danny Langtree can be from the time he spent with us on dual-reg from Hull earlier in the season.

“It’s a massive game for both sides and of the two games we’ll have had in the space of eight days I think this is the one both clubs want to win.

“I think it will be a different game to last week, more open, becaue the Keepmoat is a bigger pitch.”

Oldham due for a win at the Keepmoat Stadium
Latest player of the week, Danny Bridge