Great to be back — Kershaw

It came in the 28th minute of Oldham’s 46-30 win against North Wales Crusaders, which elevated Roughyeds back to second place in Betfred League 1.

Minutes earlier Danny Bridge had put the home side in front for the first time and it was from the restart kick that Kershaw charged on to the ball at top speed, went round ex-Oldham man Dave Eccleston on the outside and hared off up the touchline.

Crusaders full-back Dante Morley-Samuels, a winger by trade, covered across but “Kersh” stood him up and then accelerated up the touchline a second time to leave the full-back stranded. 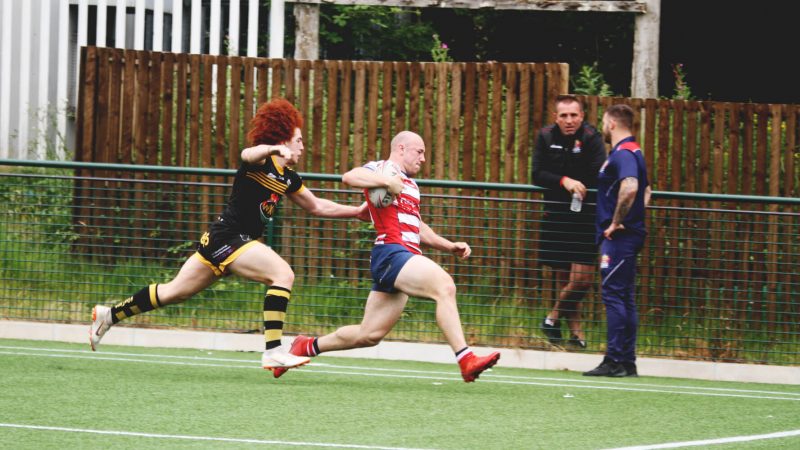 “It was a marvellous try,” said Roughyeds coach Scott Naylor. “It was why we wanted Lee back. He’s not just a finisher. He works hard too. And as Danny Bridge had gone in immediately before ‘Kersh’ it gave us back-to-back tries, which is something we don’t do all that often.”

“I saw a bit of space outside their winger. I knew it was a bit risky to go on the outside but I thought I’d go for it anyway.

“Then I saw the winger coming across and my first thought was to play safe and take the tackle.

“But then I thought he gave me enough space to go for it so I thought I’d give it a go.

“It was a great feeling to score a try like that in my first game back. It was good to be back.”

Two-try Ritchie Hawkyard won the man-of-the-match award and gave a strong hint that this would be his last season before retirement.

“It would be great to win promotion. All the lads here believe we’re the best team in this division, but we’ve still to prove it I know.

“We’ve five games left now and we’ll be taking them one at a time to see where they take us.

“We’re aiming for first or second and if we finish second we’ll have a good chance in the play-offs.”

“Crusaders were fired up after winning a few games in a row and they came determined to beat us.

“We did a lot of good things in the first half when we established control of the game.

“We spoke at half-time about building on that and gaining even more control, but it never happened because we lost our way a bit, made too many mistakes in yardage sets and gave our opponents too much good field position.”