A great time was had by all

Julie Collins led the party on behalf of the club while Anne Kearns was on hand to assist Julie with the send-off, to take pictures and to wish the party ‘bon voyage’ on our trip south down the motorways.

The club’s thanks are extended to the Whitebank Cafe, just outside the Vestacare, which opened at 7am, an hour earlier than usual, and did some brisk business in coffee, bacon butties and the like. 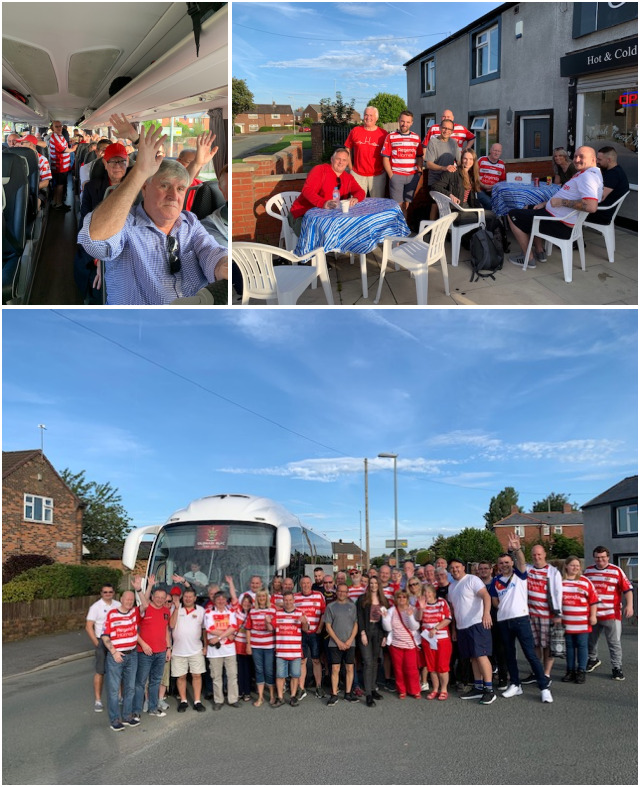 On arrival at the famous stadium we expected to be handed an Oldham banner which was to have been carried around the stadium in the pre-match Wembley Parade by supporter Julie Smith, who had won a draw for the privilege.

Despite our many inquiries, no such flag could be found but that was the only hiccup on an enjoyable trip that otherwise ran like clockwork.

“A lot of people told me how much they had enjoyed the trip and the two cup finals,” said Julie Collins. “It was a great day, we all had a good time and on behalf of the club I would like to thank all those who came with us and who supported the club by doing so.”

Participation in the official Parade around the pitch was one of the highlights of the trip for many of our fans, especially those who were visiting Wembley for the first time.

A few Oldham fans tipped the two winners – Warrington Wolves and Sheffield Eagles — but the prize in our trip competition for guessing the attendance went to our two coach drivers, who were close to the official figure of 62,717.

Two of our party, Jim Royales and his son Kieran, must have had friends in high places because they got into “official” quarters after the first final and had photographs taken with the Challlenge Cup, the Lance Todd Trophy and with former Sky rugby league expert and personality presenter Mike ‘Stevo’ Stephenson.

“We had a thoroughly enjoyable day,”

said Kieran, who was thrilled to get his hands on the Lance Todd Trophy for man of the match, won by Warrington’s Daryl Clark.
Others also said how much they had enjoyed the day.

“I’d been to Wembley a few times, but this was my first Challenge Cup final. It was a great day. I would definitely do it again.”

“I’ve been before under my own steam, but going with the Roughyeds was brilliant. Well organised and so much easier than driving yourself. I would recommend it.”

“In future years I’d like to see the 1895 Cup final played before the main event, rather than after it. But a great day nevertheless and good to spend it in the company of fellow Roughyeds fans.”

It was 1am Sunday when the coach pulled up at the Vestacare Stadium again but as fans went their separate ways they expressed the view that it had been a long, tiring yet excellent, value-for-money trip.