Only one change in 19

Scott Naylor is sticking more or less with the squad that won at London Skolars last week for tomorrow’s (Sunday) big clash with Newcastle Thunder at the Vestacare Stadium, kick-off 3pm.

There’s only one change in the 19, Paul Crook coming in for Lee Kershaw who has been recalled by his parent club, Wakefield Trinity. 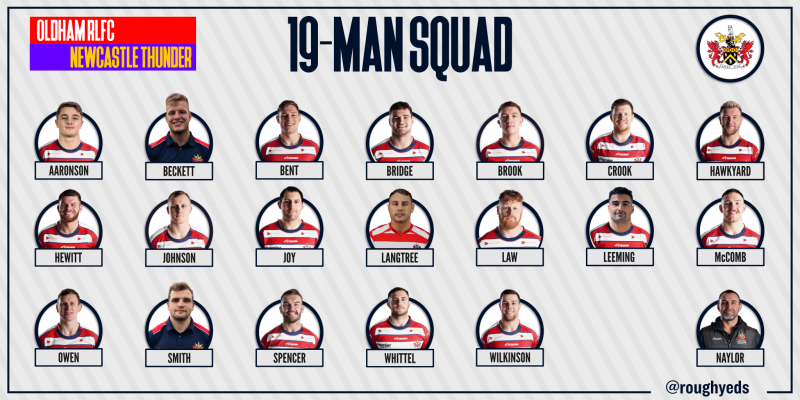 Smith and Beckett, who made their debuts in the win at London, are in line to play in front of a Vestacare crowd for the first time.

The other three new signings, Kiedan Hartley, Luke Hooley and Declan Kay, all signed on loan to the end of the season, will have to wait for their opportunities and will benefit from having more preparation time with the squad.

Crook’s inclusion, together with that of Adam Brook, will give Naylor the option of going for either youth or experience to combat the obvious threat of Quentin Laulu-Togagae or QLT as he is popularly known.

Big names in the Thunder squad are QLT, Keal Carlile at hooker, Liam McAvoy and Joel Edwards at prop, Kieran Gill in the centre, Misi Taulapapa on the wing and Lewis Young at full-back.

There will be a curtain-raiser between the under-7s of Waterhead and Westhoughton Lions, starting around 1.30pm and a second appearance of the season by Oldham Foodbank, which will graciously accept donations of tinned and other long-life foods.

Roughyeds are hoping for their best crowd of the season so far for what promises to be a gripping contest between second-placed Thunder, who will be seeking their eighth win in a row, and third-placed Oldham.

If Roughyeds were to win they would leapfrog Thunder in the Betfred League 1 table and move up to second, snapping at the heels of title favourites Whitehaven.