Roll up, roll up for the biggest event we’ve ever put on

It’s the biggest event of its kind we’ve ever staged . . . and it’s all happening tomorrow (Sunday) at the Vestacare Stadium.

Whether you’re a diehard fan, a pick-your-match supporter, a newcomer to rugby league or somebody with little or no interest in sport there will be plenty for you all at our Mayoral and 999 Day.

Turnstiles open at 1pm and for two hours before kick-off you and your children can enjoy fun and laughter while meandering among the 20 stalls and activities.

We expect one of the most popular games to be found in the stocks where you can throw wet sponges at club personnel, maybe even the chairman Chris Hamilton.

Also available for children are hook-a-duck, face painting, hoopla, ice-cream and other attractions, while there are many other stands set up by some of the Mayor’s charitable organisations.

When it’s time for refreshment you’ll find a beer tent run by the local Donkeystone Brewery of Saddleworth and all the time you will be supporting both the Mayor and her charities and the club.

The Mayor, Councillor Ginny Alexander, will be present with her Consort husband Adrian Alexander, better known to many older Oldham RLFC fans as a talented, ball-handling prop-forward in the Oldham team of many years ago. 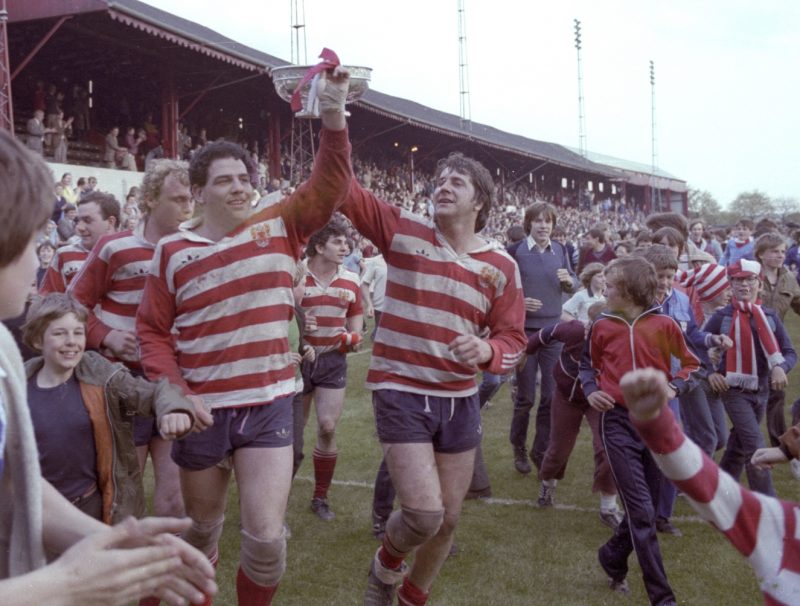 FLASHBACK . . . Adrian Alexander (right) in a different life, seen here carrying the Second Division Trophy around Watersheddings with his pal Bob Mordell after Oldham sealed the championship in 1982.
Picture courtesy of the Oldcham RL Heritage Trust.

Also in the Civic party will be the borough’s Youth Mayor, Samah Khalil.

Among other honoured guests will be Debbie Abrahams MP and her husband John Abrahams, a former captain of Lancashire County Cricket Club.

The famous Rugby League World Cup will be there and for £1 you can have a photograph taken with it, again in support of the Mayor’s charities and the club.

Among the many local charities she will be supporting during her year of office will be the Stephen Gartland Foundation; Mahdlo; the Christie Oldham; RSPCA Oldham; and the Pen Pennine Animal Shelter.

Also with us will be representatives of the emergency services, Police, Fire and Ambulance with their respective vehicles for inspection.

And on production of their ID, anyone who works in the emergency services or the NHS can gain admission for a cut-price £9.99.

Come 3pm and it’s kick-off time for our last home game of the regular 2019 Betfred League 1 season . . . and what a cracking game that promises to be!

Oldham are second in the table, Doncaster are fifth and both clubs are pushing for promotion.

We can go top if we beat Doncaster and if leaders Whitehaven slip up at Keighley.

Doncaster need all the points they can get to get as high as they can to make it easier for themselves in the play-offs.

It’s all to play for and if our performance against Newcastle last week can be produced again it will be a fabulous afternoon of semi-professional sport involving your town’s senior rugby league club.

You’ve still got one hour after the game to go back to the stalls and have a bit more fun . . . and there will be plenty of that, especially if the Roughyeds lads have won.

“Come along and let’s all cheer Oldham on to victory,”

It’s an opportunity too for Oldham people to support the Mayor and her chosen charities.

Oldham RLFC is proud and privileged to be part of that.