​Down-to-earth Jim Hallas lived his life meaning what he said and calling it as he saw it.

​​Nobody knew that better than his only daughter Gwendolen.

​And when Jim (89), trombone player, former sponsored marathon runner, local Karaoke legend, ex-commercial artist and lifelong Oldham Rugby League fanatic, who lost his wife some years ago, told Gwendolen he wanted “no fuss” at his funeral she knew what he meant and she was determined to see it through.

The hundred or so family friends, fellow Roughyeds fans and musicians from the local brass band community, who waited at Oldham Crematorium for the hearse were shocked when Gwendolen arrived driving her 12-year-old Volvo V50 with her dad’s cardboard coffin in the back.

With a smile on her face and wearing multi-coloured shoes and a red outfit, the club colours, Gwendolen said:

“Anyone who knew my dad would know that this was exactly what he wanted.

“He always told me: ‘Put me in a cardboard box and drive me to the Crem — and he meant it. He always meant what he said. And I think he would be proud of me for doing it. He didn’t want anyone wearing black. He wanted a celebration and he wanted people to really celebrate his life.

“He was a gentleman with a heart of gold, but what you saw was what you got. And what he said he meant !”.

It was standing-room only inside the Crematorium where Jim’s beloved Oldham Rugby League Club was represented by fans in club colours and by club chairman Chris Hamilton and club captain Gareth Owen.

There were red roses on the coffin; an autographed rugby ball which Jim won some years ago; and a floral tribute in the shape of a rugby ball and in red and white.

And a local band in which Jim played the trombone until a few months ago, Dobcross Brass Monkeys, was there to play their former member’s favourite piece, William Rimmer’s quick march ‘Slaidburn’.

“We also had a rendering of Frank Sinatra’s ‘The Best of Everything’. I chose that. I knew it would be dad’s last wish to everybody who was there. He was that sort of man; full of life to the day he died and a man who would want the best of everything for everybody.”

I’m having the time of my life! 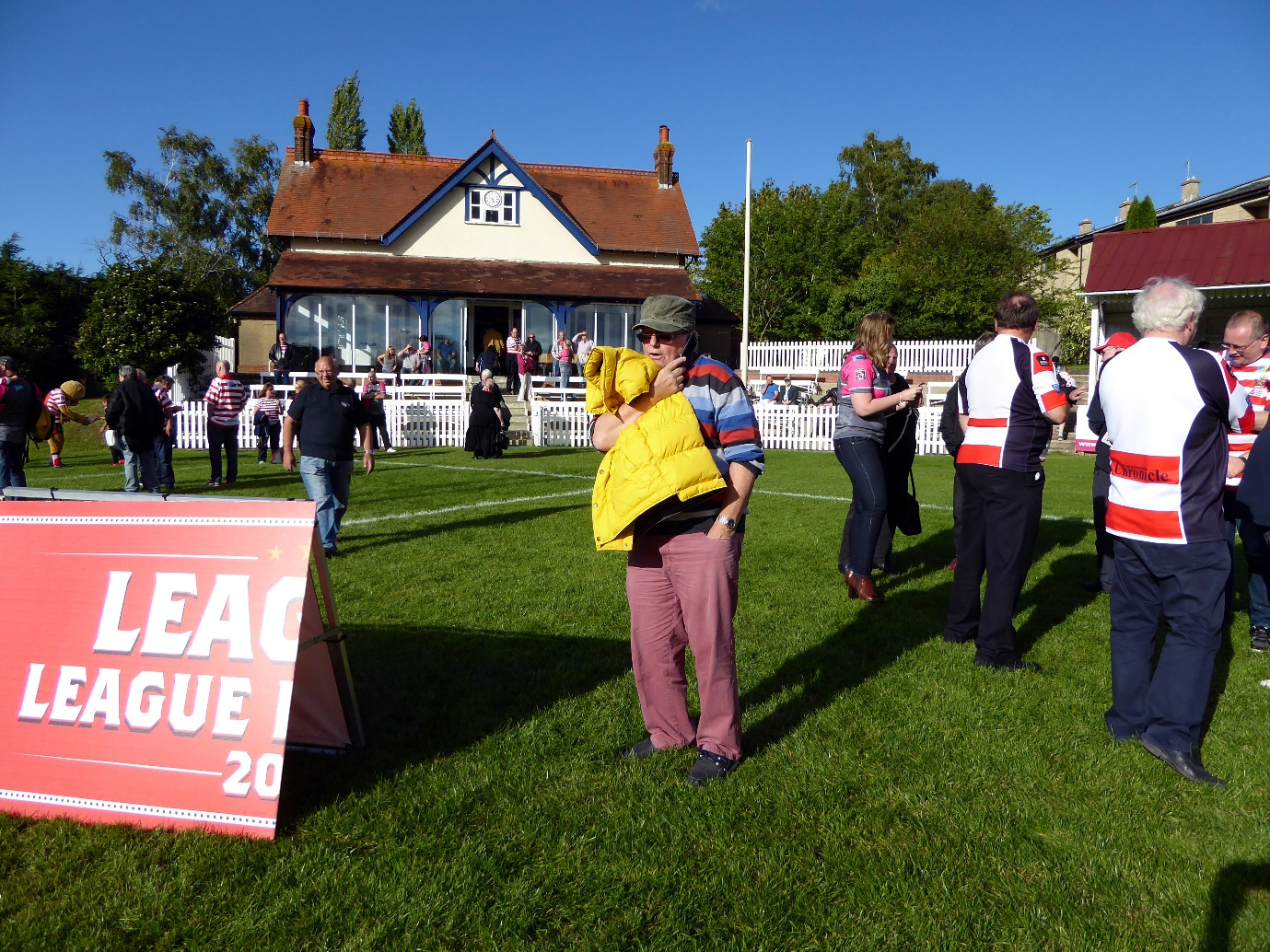 (A Grant Sommerville poem, written about Jim Hallas, pictured in 2015 at Oxford.)

I’ve teamed up with the ‘Wild Bunch’ and life’s going with a swing,
We go to all the Roughyed’s games and shout and bawl and sing.

I’m having my second childhood and life’s looking really bright,
And all the boys look after me and make sure I don’t get tight!

So all in all my life’s very sweet and every day I feel I’m a winner,
Especially when I’m scoffing, my daughter’s Sunday roast beef dinner.