Those were the days . . . and memories are made of this !

They came from all over the North-West, from Yorkshire — and even from Australia — for a reunion of The Invincibles, the Oldham Rugby League Club’s ‘A’ team (second team) which was unbeaten in a fantastic 1993-94 season and picked up four trophies along the way.

First-team stars from that era also turned up at a club in Uppermill to join a reunion bash that started at 1.30pm and went on into the night.

It was organised by Invincibles coach and ex-first-team player Shane Tupaea and his wife Karen (Scott), who was club secretary back then — the club’s youngest when appointed at the age of 21.

Shane’s team topped the Youngers Alliance second division with 21 wins and a draw from 22 games, scoring 844 points and conceding only 287.

They also went unbeaten in the Alliance Challenge Cup, the Alliance second division Cup and the Lancashire Shield, picking up four trophies in total.

And the man who lifted those trophies 25 years ago, Aussie captain Ben Olsen, flew all the way from The Sunshine Coast, north of Brisbane, to meet up with his old mates and share a few yarns of past times — and former glories.

“They were fantastic times at Oldham — the best of my career,”

“We were all mates on and off the field. That was one of the secrets. We’d work hard, get the job done and then go and have a beer.”

The big reunion was attended by team members, others who started their careers in it that season and went on to the first team and some who didn’t play in it but who were there to meet up with old friends, many of whom they hadn’t seen for two decades.

Some went on on to become club legends, like Paul Round, or even legends within the sport, like ex-St Helens captain Chris Joynt and Barrie McDermott, who is now famous nationally as a top Sky Sports pundit.

Said Barrie, who went on to star for Wigan, Leeds and Great Britain: “I’ll never forget my early days at Oldham. When I was a kid at Waterhead all I wanted to do was play for my senior home-town club and I made it. Nobody can ever take away the great memories I have of those early days.”

In the front row of the picture (left to right) are David Stephenson, Craig Mort, Ian Sherratt, Mickey Edwards. 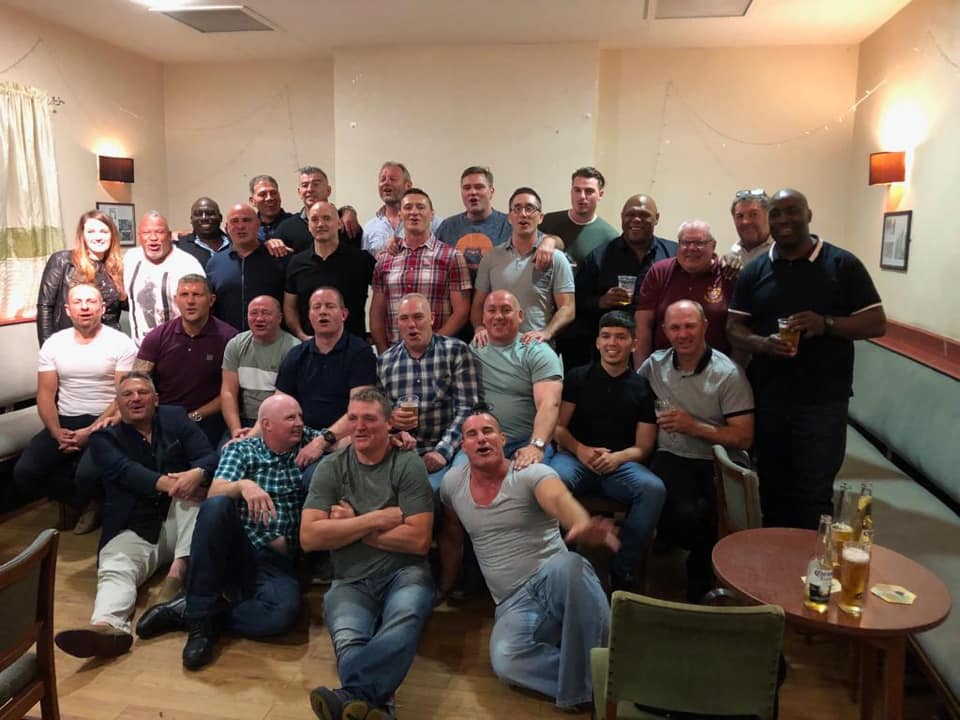 See if you can identify the others, most of whom are named in the story.