SUNDAY’S promotion decider between Oldham and Newcastle Thunder — the biggest game at the Vestacare Stadium since Roughyeds went up after beating Keighley Cougars in 2015 — will be sponsored by CDX Security of Warrington.

The company has done various sponsorships with Roughyeds over the last two years, but extended it to full match backing for the promotion semi-final against Doncaster and have now repeated it for this weekend’s big game against Thunder for the right to play in the Betfred Championship next season.

CDX managing director John Roddy is a keen rugby league fan and will be at the game on Sunday with guests.

The company provides a wide range of market-leading security services and solutions to clients across the UK.

The Oldham players will be out pre-match doing their warm-up session in CDX-sponsored training tops and the company also made a donation to the £237 raised by Roughyeds at a Coffee Morning in aid of Macmillan Cancer Care.

“We were delighted to have John and his CDX party with us for the Doncaster game and even more pleased to welcome them back for the final,”

Other sponsors at the big game will be the Oldham Past Players Association, headed by John Watkins, who will also be with us for the second game in a row.

As the final will be our last game of the season items of Roary’s Pride merchandise will go on general sale before the game from the club shop and on the pitch at half-time.
Roary will be doing the selling, assisted by Sophie Nixon.

Among items available will be Roary pencils and Roary wristbands, each for £1 and water bottles for £2. 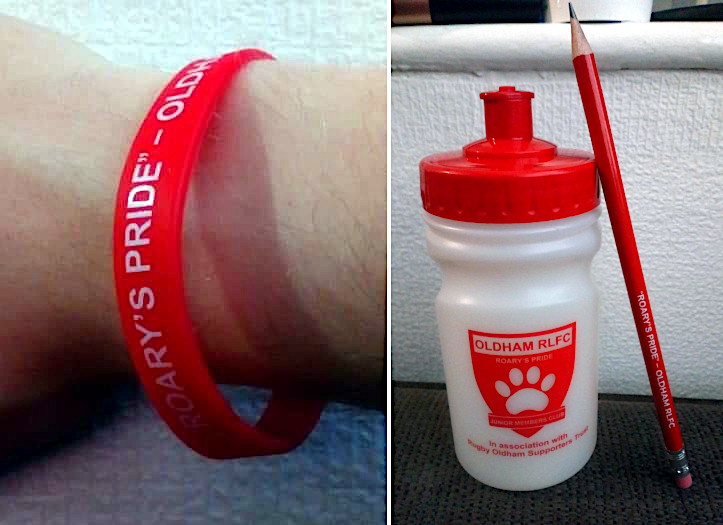 We will also be having a minute’s silence before kick-off to pay respects to many with Oldham RLFC connections who have died since the end of last season.

But there will be many unnamed others too, known and remembered by fellow fans, to whom the club will also pay its respects.

Pre-match ticket sales are going well and the Roughyeds office will be open from 10am to 6pm today (Friday) for anyone wishing to buy early. The game is not all-ticket but the club is urging fans to purchase in advance if possible in order to facilitate less queuing at the turnstiles.