Kicking off at home against Widnes Vikings

​NEW-LOOK Oldham will kick off their 2020 Betfred Championship campaign with a Bower Fold clash against Widnes Vikings on Sunday, February 2 (kick-off 3pm)

Both clubs will have new coaches in charge for the first time at Championship level —- Matt Diskin for Roughyeds, Tim Sheens for Widnes.

Widnes have revealed they will receive the full central funding under the new “return on investment” criteria, taking the Vikings’ figure to just under £250,000 for 2020.

Salford hooker Logan Tomkins is a headline-hitting addition to the Sheens squad.

Tomkins, who worked with Sheens at Salford before the former Australian national team boss went to Hull KR, played in this year’s Super League Grand Final for the Red Devils and his move to Widnes is regarded by the Vikings as a statement of intent for their ambitions in 2020. 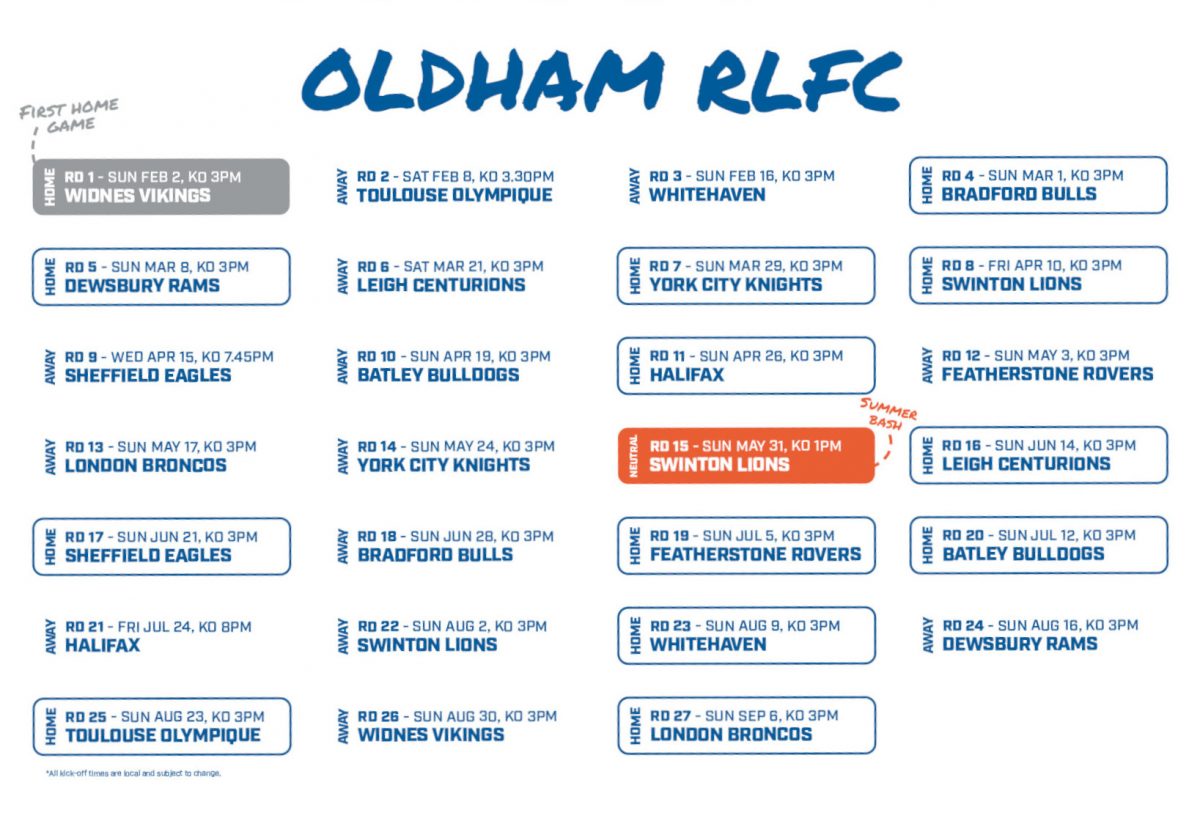 It’s a tough opening for Oldham, whose second match, on Saturday, February 8, sees them fly to the south of France to face Toulouse Olympique.

Setting out their stall to win promotion to Super League in 2020, they have signed three international forwards in Harrison Hansen, Lloyd White and Samoan-capped Frank Winterstein, who arrives from Penrith Panthers after playing nearly 60 NRL matches with Canterbury, Manly and Penrith.

Roughyeds will be at home to derby rivals Swinton Lions on Good Friday but, interestingly, clubs across the board preferred not to play on Easter Monday, opting instead for evening games two nights later on the Wednesday.

The visit to Bower Fold of Halifax on Sunday, April 26 is the last Championship game at the Stalybridge venue until Sunday, June 14.

The four Championship games in May are all on the road, including the Summer Bash clash with Swinton Lions at Blackpool on the last day of the month.

This is to allow essential work to be carried out on the Bower Fold pitch at the height of the growing season.

The flip side is that four of the next five games are at Bower Fold.

The regular season of 27 games (that includes Summer Bash as an extra) ends as it began — but even tougher.

Toulouse will be at Bower Fold on Sunday, August 23, then Roughyeds go to Widnes a week later and drop the curtain on their Championship return with a home game against London Broncos on Sunday, September 6.