BRENDAN Sheridan, head coach of NCL club Dewsbury Celtic for the past two years, has been appointed as assistant coach to Oldham’s new team boss Matt Diskin on a one-year contract. 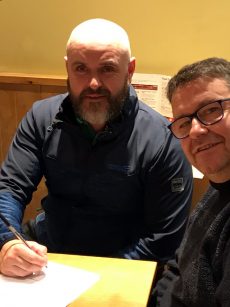 Aged 40, and a former scrum-half or hooker with Sheffield Eagles and Batley Bulldogs, he will stand side by side with Diskin when the Roughyeds’ new coaching duo meet the players for the first time at a meeting prior to the start of pre-season training on Tuesday.

Both Dewsbury men, they have known each other for several years through the community game in the Heavy Woollen town, more specifically at Dewsbury Moor and Dewsbury Celtic.

Under the leadership of Sheridan, younger brother of Castleford Tigers’ assistant boss Ryan Sheridan, Celtic finished fourth in division three of the National Conference last season and then won promotion to division two with play-off victories over local rivals Batley Boys at home and Heworth of York away.

They then went off to Australia on tour — a massive project for any amateur club.

“Brendan has done a fantastic job at Celtic. He deserves a chance in the pro game and I’m really pleased for him.

“We went through an intense interview process because I was conscious of the fact that I had known him a long time and I didn’t want to fall into the trap of appointing him just because I knew him.

“The trust was always there but I wanted to do things right and that meant putting him through an intense interview.

“He ticked things outside the box and he showed great attention to detail. I’m sure he will be a great member of staff whom I will lean on heavily.

“He is steeped in the local rugby league scene in Dewsbury and he’ll be able to use his experience and contacts in the amateur game to pick out lads who want it and who just need and deserve a chance.”

Sheridan played at Dewsbury Moor, as did elder brother Ryan, from the age of five.

“I’ve been steeped in the game ever since,” he added. “I went on to play for Sheffield and Batley and I’ve been involved in the local scene for the past 12 years, ever since my playing days came to an end.

“Matthew took me through a full interview process. He sent me a video of an Oldham game and asked me to identify aspects of the performance in which improvements could be made on both attack and defence.

“I then met Matthew and Chris (chairman Chris Hamilton) separately for a scrum-down in which we discussed things like structures, criteria and, in Matthew’s case, what he expected of everyone. He will leave no stone unturned, that’s for sure.

“We had to make sure we were all facing the same direction and breathing the same air — that’s very important.

“A few days after the interview Matthew rang me and offered me the job and I told him there and then I was thrilled and delighted to accept.

“All my hard work in the amateur game over 12 years is now paying off and I can’t wait to get started.”