Sheriffe comes in to replace the Law Man!

BUILDING for the Betfred Championship, newly-promoted Oldham have replaced Scott Law with another experienced front-rower from Yorkshire in 33-year-old Jode Sheriffe, formerly of Halifax, Bradford, Keighley and Dewsbury. 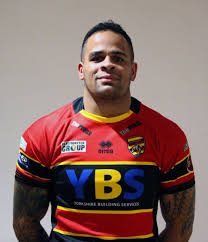 “We needed a big, craggy prop up there in the middle, especially so since Scott Law headed off to Australia.

“Like Scott, Jode has been around a long time and he knows the game inside out. We’ve done well to get him because there aren’t a lot of players about who fit into that mould.

“He’s passionate about the game — always has been — and he’s the sort of personality who will be good for us around the club and in the dressing room as well as on the pitch.”

Capped by Jamaica and from a family that’s steeped in rugby league, his elder brother is Simon Grix’s newly-appointed assistant coach at Halifax, Rikki Sheriffe, and his younger brother Jesse has played for several clubs in Yorkshire.

“The Championship is a tough competition, but it will be a challenge I’m relishing. I can’t wait to get started.

“From what I gather Oldham seems to be a closely-knit, family-type of club and that was one of the main things that appealed to me when I talked to the chairman.

“I was looking for something new when Matt messaged me and asked me what I was going to be doing next season. Then I met Chris (Hamilton) and it all moved on from there.

“I’m passionate about rugby and about the development of kids in the sport. Family is also very important to me and one of the reasons I love rugby so much is because its like one big happy family.

“In all the talks I’ve had with different people, the Oldham club came across as a good place to be and that was a big thing in my decision to sign.”