St Anne’s little ones looking forward to their big day at Bower Fold.

The little ones from Oldham St Anne’s will again have a dual role to play ahead of our big kick-off at Bower Fold on Sunday when we entertain Widnes Vikings in our first Betfred Championship game of the new season.

The under-6s and under-7s in green and gold will play a curtain-raiser and later act as flag bearers as momentum builds towards the big kick-off.

Some of the Saints’ youngsters are pictured here with their three coaches, Carl, Dave and Darren and an un-named helper. 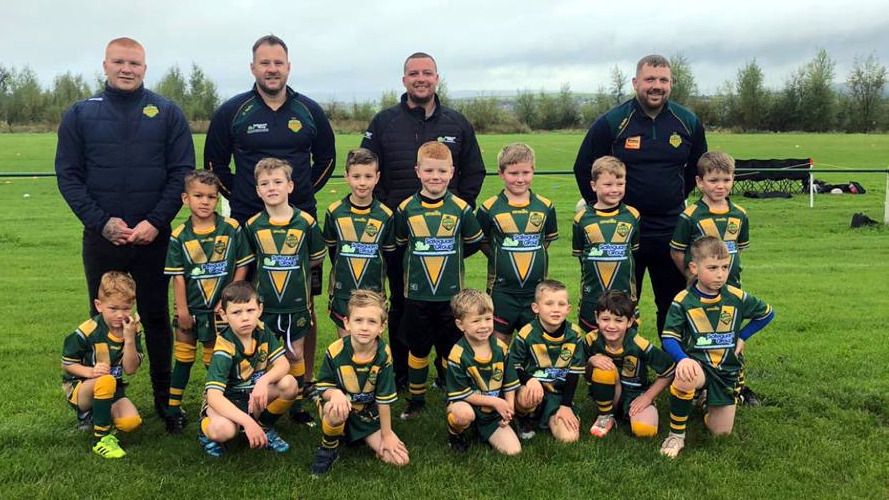 They are looking forward to the season ahead in the knowledge that their boys have grown in confidence on the rugby field in the last 12 months and have a bright future ahead of them.

Furthermore, they thoroughly enjoy being involved in the Roughyeds’ game-day experience; throwing the ball around in a stadium like Bower Fold; and then watching their town’s professional club at a level only one tier down from Super League and including big-name traditional clubs like Bradford Bulls, Featherstone Rovers, Widnes Vikings and Leigh Centurions , all of whom have won the Challenge Cup at Wembley, and Oldham, of course.

Even six year olds know all about the magic of Wembley, but they might not know that Widnes, then known as the ‘Cup kings’, made seven trips to Wembley in a ten-year period in the 1970s and 1980s.

Like Oldham, they were among the original 22 clubs that formed the Northern Rugby Football Union in 1895, making the two clubs in action on Sunday two of the world’s first and oldest rugby league clubs.

Rugby League is 125 years old this year and both Oldham and Widnes were in there right from the start.

To this day, Widnes remain the last English club to beat a touring Australian national side.

And in 1989 they became the first World Club Champions when they beat Australian champions Canberra Raiders 30-18 at Old Trafford.

That’s your rugby league history lesson ahead of Sunday’s big day boys. Enjoy it . . . you’ll remember it for the rest of your lives!

Bower Fold Events Centre is the place to be
Sheens, Smith show Vikings’ intent to plunder