A much stronger squad for key game in Cumbria

The only players not included are long-term injury victims Jode Sheriffe, Ben Davies and Ed Smith.

Whitehaven, who last week gave London Broncos a fright in the capital, will have Karl Dixon available again after he missed the London game while Brett Carter is expected to be ready for his competitive debut.

“We will be monitoring the situation closely throughout Saturday and again on Sunday morning.”

A decision is due to be made tomorrow (Sunday) morning.

The battle between the two newly-promoted clubs will be streamed exclusively live on OuRLeague. That’s why the kick-off has been put back to 6.15.

The Cumbrians, coached by Gary Charlton, swept almost all before them last year, losing only three times all season and finishing as champions with the prize of automatic promotion.

Roughyeds, meanwhile, had a trickier road to promotion, finishing in second place and then beating Doncaster and Newcastle Thunder in the play-offs to seal their place in the Betfred Championship.

One of Oldham’s eye-catching results was a fine 36-12 home win over Whitehaven but ‘Haven returned the favour with a hard-fought 16-10 win in Cumbria — Roughyeds’ only defeat in their last 12 league outings.

Congratulations to Jack Spencer who, in France last week, made his 150th career appearance and now needs only five more games for Oldham to reach a century for the Roughyeds.
To date he has played 95 games for Oldham; 32 for Halifax; 16 for Barrow; and seven for Salford.

Spanner and Phil Joy will be the senior “middles” in the big game at Whitehaven, setting the lead up front for youngsters such as Titus Gwaze, Jimmy Beckett and Matthew Fletcher, who scored Oldham’s only try in France by supporting a break from Matty Wilkinson, who had jumped out of dummy half.

On-loan Gwaze, on debut, and Fletcher enhanced their growing reputations in Toulouse and the return to action of another young tearaway, on-loan Beckett, should give the pack a more potent look.

“It was a pity Toulouse ran in a lot of points in the last 20 minutes because we competed well for an hour against one of the best teams in the division and with a very depleted squad.

“There are times when you just have to hold up your hands and accept that you were beaten by a faster, bigger, stronger side which I am confident will finish in the top two.
“All my lads though could leave the field with heads held high and I was proud of that.

“As for the Whitehaven game I think it’s fair to say that our season starts here. The Championship is two divisions within a division, to be realistic, and so far we’ve played one team that’s tipped to finish in the top five and another that many people think will win it.

“It’s always tough up in Cumbria but there re likely to be additional hurdles this time, provdied by the weather and the state of the pitch.

“I’m anticipating a real old-school type of game. It will provide a tough challenge but we’re up for it.” 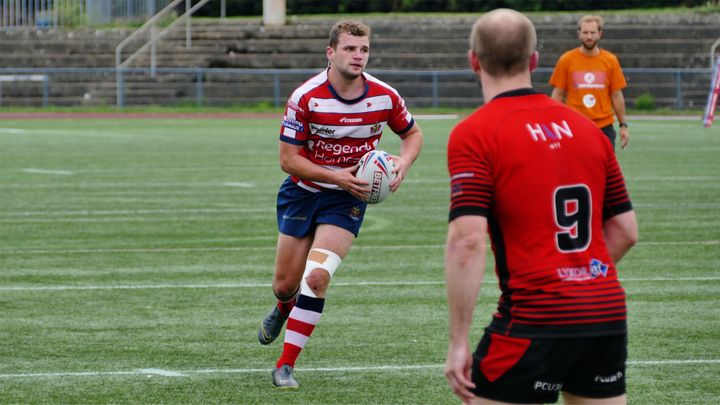 OLDHAM Rugby League Club is “excited” (Matt Diskin’s words) by the signing for next season of Leigh Centurions and former Widnes Vikings winger Ryan Ince, who played two Betfred Championship games on loan for Roughyeds before the lockdown early this year.
Our Partners