A tribute to Frank Myler, one of Rugby League’s greatest-ever

RUGBY League was in mourning today following the announcement that Frank Myler had died, after a long illness, at the age of 81.

The sincere condolences of chairman Chris Hamilton, head coach Matt Diskin, all the players, backroom staff and supporters of Oldham RLFC are extended to the Myler family. 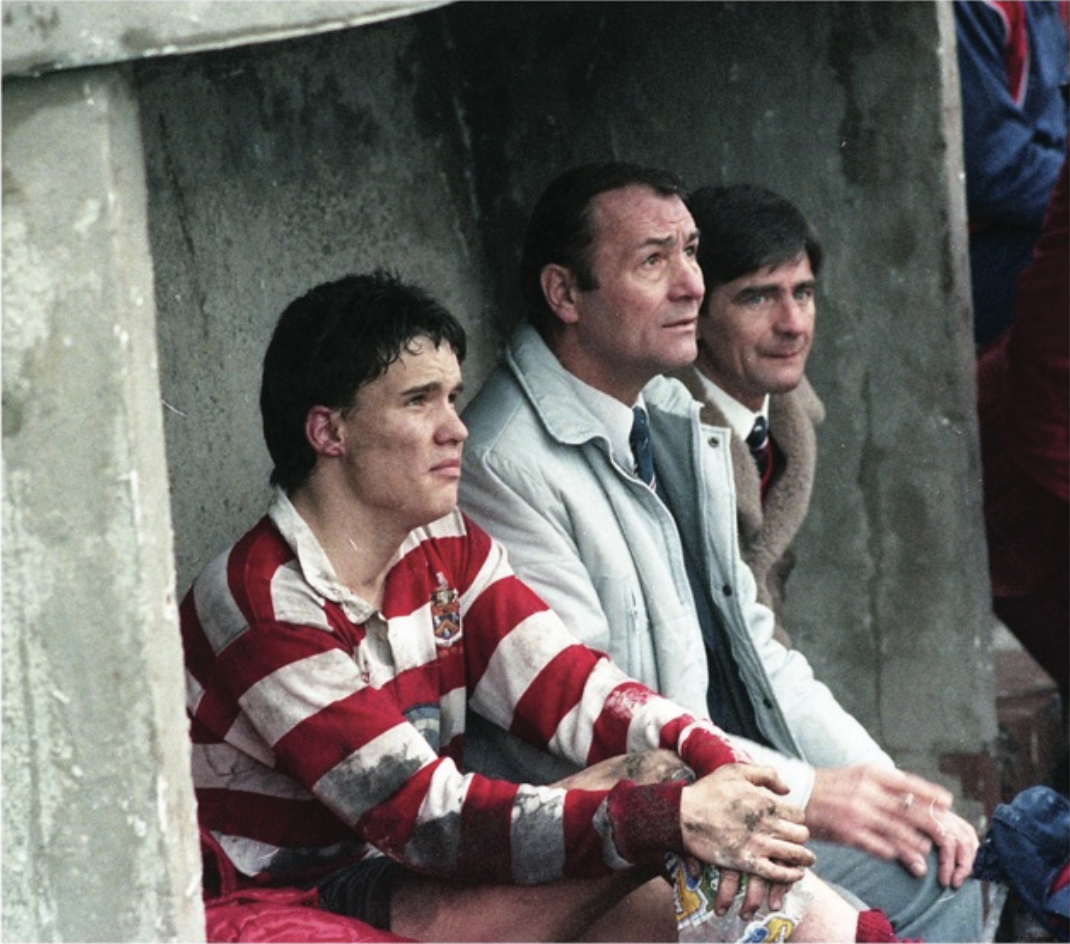 A true legend of the game, Frank captained both Widnes and Great Britain; starred for St Helens; coached Widnes, Rochdale Hornets, Swinton Lions and Oldham at club level; and became one of the most famous names in the history of the sport.

A World Cup winner in 1960, one of his greatest achievements was in 1970 when he captained Great Britain to an Ashes-winning triumph against Australia — the last GB skipper to lift that particular trophy.

Under his leadership as head coach, his home-town club Widnes were crowned champions for the first time.

As a tough-as-teak stand-off he scored 144 tries in 12 years as a player at Naughton Park between 1955 and 1967. He made his debut for the black-and-whites as a 16-year-old and his classical performances when he was at the peak of his playing career in 1964 was key to the Chemics’ Challenge Cup final victory over Hull KR, who had pipped Oldham in a semi-final series that went to three games.

As international legends of the sport paid tribute today to Frank, the Widnes club said it was heartbroken by his loss.

He was placed on a pedestal wherever he played — Widnes, St Helens and Rochdale as player-coach — and it is true to say that in the time he spent as head coach, manager and general manager at Oldham, the Watersheddings club enjoyed its best years since the glory, glory days of the 1950s.

He arrived with his No 2, Peter Smethurst, a former Oldham player, for the start of the 1981-82 season when Roughyeds were in the Second Division, having been relegated the previous season.

His early signings were second-row forward David Nicholson from Swinton, utility back Alan Taylor from Widnes, hooker Alan McCurrie, a £35,000 buy from Wakefield Trinity and veteran prop Brian Hogan from Widnes for £18,000.

Myler’s men went back to the First Division as champions, won the Slalom Lager Rose Bowl and reached the semi-final of the John Player Trophy.

Oldham’s progress under their former stand-off didn’t go unnoticed at St Helens, who wanted him to succeed Kel Coslett as Knowsley Road boss, but Frank chose to stick with Oldham and season 1982-83 was the Roughyeds’ most successful since 1961.

Smethurst took the job of Leigh’s head coach and was replaced by Frank Barrow, but when Myler’s achievements at club level earned him the top position of full-time Great Britain coach, Peter ‘the butcher’ (Smethurst) returned to Watersheddings as temporary boss with Frank Barrow as his assistant.

Season 1983-4 was a traumatic few months for Oldham who clearly missed the ‘real’ boss, Frank Myler, and lost Smethurst, who quit in January, 1984 after a poor run of results.

Barrow, his successor, lasted six days and one game — a dreadful performance in a 42-8 defeat Whitehaven, who celebrated their first win of the season.

Brian Gartland, colts’ coach and the man mainly responsible for hand-picking and developing the likes of Ashton, Kirwan, Worrall, Flanagan and Goodway, not to mention many other youngsters, was elevated to first-team boss for the remainder of the season.

Despite the turbulence, Gartland guided Roughyeds to a tenth-placed finish while Myler caused a few eyebrows to be raised within the game by naming five of his former Oldham players — Foy, Flanagan, Ashton, Worrall and Goodway — in the squad for the 1984 Great Britain tour of Australia, New Zealand and Papua New Guinea.

It was the first time in the history of the Oldham club that five players from Watersheddings had gone on tour.

Myler was back at the Watersheddings helm in 1984-5 when he spearheaded a fifth-place First Division finish behind Hull KR, St Helens, Wigan and Leeds — the club’s highest status since the 50s.

Despite transfer demands from Flanagan, Ashton and Goodway, who were transfer-listed at £45,000, £45,000 and £100,000 respectively, Roughyeds were still flying high.

In the summer of ’85, classy stand-off David Topliss arrived and the scene was set for another big year.

From Down Under, came the Liddiard boys, Mal Graham and Gary Warnecke as Myler assembled a squad that finished ninth in the top flight and reached the Challenge Cup semi-final against Castleford on a never-to-be-forgotten day at Central Park, Wigan.

It wouldn’t be Oldham if there wasn’t a drama and Myler had no hesitation in making 16-year-old Glen Liddiard the youngest-ever Challenge Cup semi-finalist when naming him at outside-half.

Topliss was seriously injured in a car crash in the previous January and the boy Liddiard found himself in the key pivotal role on one of the biggest stages in the domestic game, playing in the same Oldham team as elder brother David, who was at full-back.

A finely-balanced semi swung Castleford’s way when one of the Beardmore twins was awarded a try when he touched down with one foot over the dead-ball line.

The following season — Frank Myler’s farewell year at Oldham — was as bitter-sweet as they come.

Champions Wigan, with a galaxy of star names, were sent packing from the Challenge Cup, beaten 10-8 on a marvellous night under the Watersheddings floodlights, which included THAT try by Kirwan.

Earlier that season, on another magnificent night, the touring Australians were given the fright of their lives by an Oldham side that looked good enough to grace the first division for years to come.

The first division was to be cut from 16 clubs to 14, however, so four were relegated out of 16 and Oldham went down with Featherstone, Barrow and Wakefield.

They finished fourth off bottom on the same points as Leeds and only one behind Hull. How cruel was that ?

The Myler years were, without doubt, among the best that most modern-day Oldham supporters will ever have experienced.

Rest in peace Frank — and thanks for the memories.