Summer Bash tickets are now on sale from Oldham RLFC and we ask all our fans to buy their tickets from us because the money then stays with the club rather than with the RFL.

It works like this. Each club gets a ticket allocation and each club has to pay the RFL a not inconsiderable amount, running well into four figures, towards the costs of staging the two-day event.

The only way a club can recoup that money, or at least some of it, is through its own ticket sales so every Summer Bash ticket bought from us is of direct benefit to your club at a time when every penny counts.

We can’t stress that too much. If you plan to go to the Summer Bash weekend at Bloomfield Road, Blackpool on Saturday, May 30 and/or on Sunday, May 31 then please get your tickets from the Roughyeds office at the Vestacare Stadium, Whitebank Road, Oldham OL8 3JH on any Monday, Wednesday or Friday between 10am and 3pm.

You can ring between those times on 07904 898177 or make contact by email to: enquiries@roughyeds.co.uk

Oldham play Swinton Lions on the Sunday (May 31) with a 1pm kick-off. The full weekend programme is like this:

CLUB SEASON-TICKET HOLDERS CAN BUY SUMMER BASH TICKETS FOR HALF PRICE AND THEY ARE ASKED TO TAKE THEIR SEASON-TICKET BOOKS INTO THE OFFICE WHEN BUYING THEIR TICKETS FOR BLACKPOOL. ROUGHYEDS WILL TAKE VOUCHER ‘A’.

Ticket prices are as follows:

All seats will be unreserved and fans from the various clubs will be accommodated like this:

Oldham fans will be placed in the South and South-West stands as indicated by the orange/amber coloured areas of the seating plan.

They can sit anywhere between blocks N and Z (half of Matthews West and all of Armfield South) as there is free-flowing access throughout that area.

The RFL has historically allocated seats for this venue, but it was thought more sensible to follow the Magic Weekend model, allowing fans the freedom to group together and make some noise when watching their own team but to sit elsewhere during other games.

“Summer Bash at Blackpool has become a highlight of the Rugby League calendar and we are sure the 2020 event will again provide some great moments for the fans in the stadium and for those watching at home.” 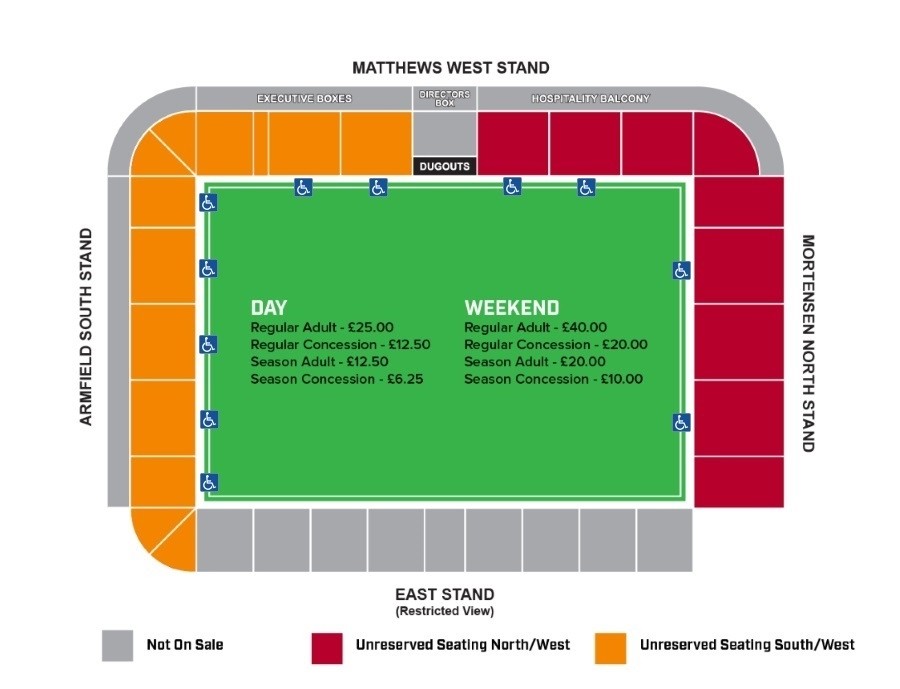