WE are saddened to report the death of former Oldham full-back Brian Curry, who had two good seasons at Watersheddings back in the 1960s. 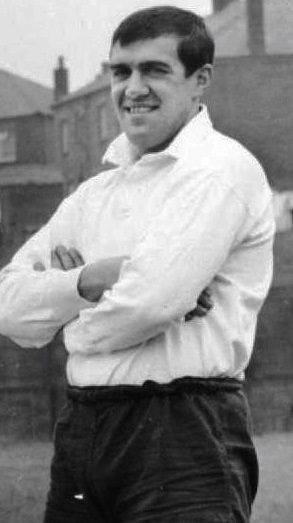 Aged 84, he died on May 2 in a Huddersfield care home. His funeral is scheduled for May 21 at Huddersfield Crematorium, but no time is available yet and the message anyway is that, because of social-distancing, only close relatives will be allowed to attend.

It isn’t known whether his death is in any way connected with Covid-19.

Huddersfeld born, he spent his best years in the game back in the days when his home-town team played at Fartown. He is still regarded to this day as one of the best post-war full-backs who ever wore the Huddersfield jersey and that&#8217;s saying something when you consider that Roughyeds alone have signed three No 1 stars from that club, namely Frank ‘Spanky’ Dyson, who became our player-coach, Brian Curry and Aussie speedster Wally Gibson.

Oldham paid Huddersfield £5,000 for Brian Curry, an accomplished goalkicker, in order to replace goalkicking full-back John Winton, a South African, who had returned to what was then Rhodesia.

In the previous season, 1965-66, Curry had kicked 119 goals for Huddersfield to finish second in the national goalkicking charts behind Len Killeen of St Helens, who kicked 120.

Curry was indeed in top company and it was his high ranking as a goalkicking full-back that led to the Oldham committee’s decision to fork out £5,000 — a big fee in those days — for the services of the 27-year-old.

They had also looked at Colin Tyrer of Leigh, James at Halifax and Kel Coslett at St Helens, but in the end the £5,000 went Huddersfield’s way and Brian Curry game to Oldham.

An emerging Martin Murphy was beginning to make his mark when Curry was allowed to go to Blackpool Borough for a give-away £100 in the early part of the 1968-69 season, but he finished his playing career where it started, at Huddersfield, for whom he amassed 212 appearances and scored 1,003 points with 473 goals and 19 tries,

He was later on the coaching staff at Fartown in two spells as No 2.

The sincere condolences of everyone at the club go to Brian’s family and especially from those fans of a certain age who have vivid memories of Brian inhis playing days.

Like Frank Dyson a couple of seasons earlier and Wally Gibson many years later, Brian served us exceptionally well and did himself and Huddersfield proud while wearing our red and white.

Massive thanks to all concerned
Betfred Championship and League 1 – Update, May 13