ROUGHYEDS are delighted to confirm that Dan Abram, consistency personified in League One and Championship since leaving St Helens as a 19-year-old, has signed a new one-year contract to cement his stay at Oldham where his dad, Darren, was a free-scoring centre more than 20 years ago.

Soon to hit his 25th birthday, utility man Abram has played in 63 of a maximum 66 games since the start of the 2018 season – 28 with Whitehaven (League One) in 2018; 29 with Rochdale (Championship) in 2019; and six out of six with Oldham (Championship) before the COVID-19 lockdown interfered with things early this year.

All but three of those 63 appearances saw him in his side’s starting line-up and in the same period he enjoyed five League Express man-of-the-match awards while at Whitehaven and another six in his season at Rochdale.

On leaving Saints, where he played in the youth sides with Dave Hewitt and Lewis Charnock, he went to Barrow Raiders where he played a total of 29 cup and league games in 2016 and 2017.

But it was when he moved up the Cumbrian coast to Whitehaven that he began to make a name for himself. Used mainly as a full-back, he scored nine tries and kicked 95 goals (226 points) in his 28 games, hitting fans' favourite status when his last-minute touch-line goals earned his side two thrilling League One wins against derby rivals Workington Town; 14-12 at home and 24-22 at Derwent Park.

His 85 League One goals at Whitehaven came from 113 attempts.

Rochdale was the next port of call for Abram and although Hornets struggled in the Championship and finally got relegated he still played in nearly every game — roughly split equally between full-back and half-back –  while scoring six tries and 56 goals for 136 points.

Having signed for Matt Diskin’s squad for this curtailed 2020 season, he played in all six games .scoring two tries and landing 11 goals.

Having put pen to paper on a deal that keeps him at Oldham for another season, Abram said:

“I’m really happy about this. Because of the strange things that have happened this year I don’t seem to have been at Oldham for long, but I thoroughly enjoyed my pre-season and then the start of the Championship season even though we only won one game. The environment was good. I’m really happy at Oldham.

“I’ve been able to work through lockdown because I work for a large food company, Brakes, and people have to eat so the work goes on.

“I’ve been trying to keep mind and body ticking over by running, cycling and working out in the gym that is set up in our garage at home, but I’ve seriously missed squad training and playing and I can’t wait to get back in.

“With the squad that’s being assembled I think we’ll do really well.  We need to step up our game, obviously, but the first few games in February and March were a big learning curve for us and I think we learned a lot. We’ll certainly have a real dig.

“Matt gave me the No 1 shirt and I was really happy with that. It gave me a good opportunity to develop my game and I’ll be knuckling down to develop it further. I can’t wait.”

“We were delighted to sign Dan last year and the fact that we were keen to keep him says a lot about him. He’s a talented kid who can play equally well at full-back and at half-back  so he gives us options when we’re looking for someone who can use the ball  coming out of the back.

“Competition for places will bring out the best in him. He has loads and loads of potential and I’m delighted to have him on board again.”

The squad is coming together nicely and, to whet your appetite, we expect to have more signing news before the end of the week. 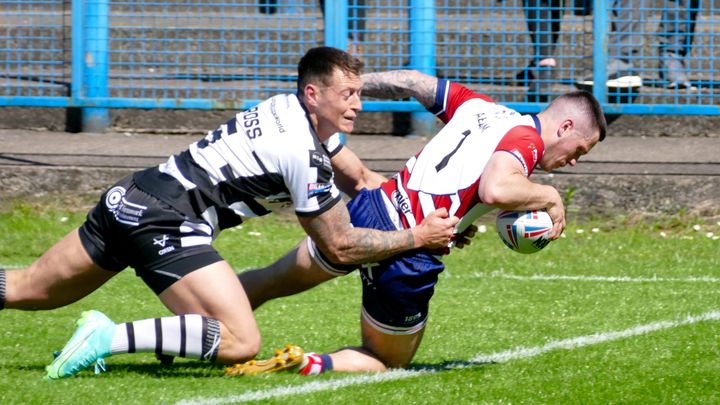 DAN Abram, Oldham RL Club’s utility back, has happy memories of playing in Cumbria — and especially of his match-winning performances at Whitehaven’s newly-named LEL Arena, better known as the Recreation Ground, or even The Recr