Hutchings Back With a Mission to Fulfil His Promise

ROUGHYEDS are pleased to announce that young John Hutchings, once on scholarship at Wigan and then a member of the St Helens under-19s squad, has signed a new one-year contract with a determined mission to fulfil his undoubted potential.

Having been released by two giants of the game, and having been prevented by injury from making an early impact before lockdown in his first season at Oldham, the 21-year-old is aware that 2021 will be key to whether he can prove Wigan and Saints wrong and show that Matt Diskin and Roughyeds know a good youngster when they see one.

“I’ve had a good chat with Disco (Matt Diskin) and he’s made it clear what’s expected of me,”

said Hutchings, who carries the ‘utility’ tag, having played, down the years, in a few positions all over the park.

In fact, his first appearance in Oldham colours in a pre-season game at Barrow last January saw him come off the bench in the second half and play a sterling role up the middle in a 22-18 win which got Diskin’s tenure of the Roughyeds job off to the perfect start.

After the game the new Oldham boss was lavish in his praise of the young Wiganer, who had expected to get a run in the backs but was called upon to show what he could do in the engine room, battling with the Barrow forwards and emerging on the winning side with reputation enhanced.

After the game, the Oldham boss said:

“Individually, I liked the look of John Hutchings. He played a role down the middle channel for the first time in his life and he did it well.

“He drove the ball and carried it strongly, proving that he can play at both centre and in the middles.

“His value to us as an extra ‘middle’ will be very important indeed.”

He never got the chance to prove it because in the Law Cup game at Rochdale seven days later he started at centre and pulled a hamstring, which kept him sidelined for six weeks until he returned to the side — at centre again — in a line-up that lost at Widnes in the Challenge Cup on February 23.

A product of Orrell St James, Hutchings has played rugby league since he was a small boy, like most Wigan lads, and he’s happy to play wherever he’s picked.

“I think Disco is going to use me on the wing next year. Over the years I’ve played everywhere. I played a lot at Saints on the wing and, to be honest, I’ll do my best wherever I’m asked to play.

“The main thing I need is a run free of injuries. I never really got going at the start of this season because of the hamstring injury I picked up at Rochdale in my second game. Six weeks later I thought I was okay and I played at centre at Widnes in the Cup only to pick up a recurrence of the same injury.

“I missed the next two games at home against Bradford and Dewsbury and we haven’t played since.

“At least, I’ve had seven months to get it right and I’m feeling good now. I’ve been in the gym every day since it re-opened and I’m really looking forward to getting cracking again and, hopefully, enjoying an injury-free campaign.”

“He came to us from Saints as a winger and we tried to make him into a utility player which was foreign to him. We’ve had a good chat and he’ll be given every opportunity to win a wing spot if he works hard and does what’s required of him.

“He’s a very talented kid who’s good with the ball, but he’s also a big lad who needs to work hard on his own physical condition. If he does that and shows up in good shape he’ll get every chance to win a wing spot.

“He knows the score. The ball is very much in his court.”

Roughyeds have now announced 18 players who are contracted for 2021, including five new signings in Luke Nelmes, Martyn Reilly and Tommy Brierley, all from Dewsbury Rams, Tyler Dupree from Leeds Rhinos and Ben Heaton from Hunslet.

The breakdown of backs and forwards is like this:

Matt Diskin, the Roughyeds head coach, has successfully completed a 170-mile coast-to-coast challenge on a bike from Bridlington to Morecambe to raise money for Leeds Rhinos legend Rob Burrow in his courageous battle with Motor Neurone Disease.

“It was tough and I got aches and pains long before the end, but it was all in a good cause,”

said Diskin, himself a former Rhinos star and a senior member of an all-conquering Rhinos side.

He did the sponsored challenge with four mates from Dewsbury Moor. 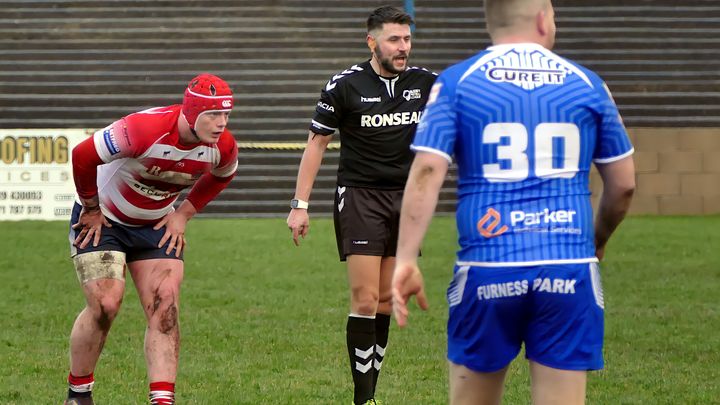 Hutchings Goes to Workington on Loan

JOHN Hutchings, our young utility back, has moved to League One club Workington Town on a month’s loan.

Hutchings in 21-man squad for first time this year